You’ve almost gotta love Tucows Inc. (USA) (NASDAQ:TCX) for its humor, as demonstrated by the company reportedly taking a real cow to a conference, plus its depiction of two cows in its logo.

But the negatives inherent in Tucows’ business plan utterly outweigh its funny personality.

The stock for this Toronto, Canada-based domain name registrar and wireless service provider has been running wild and crazy the past two months. Indeed, Tucows jumped over the moon at $32 on July 21 and then began declining somewhat. The stock is now on the brink of turning around and trampling investors before they can jump out of its path.

Before Tucows hooks another one, check out our executive summary briefly describing the top reasons we think Tucows’ stock price is ready to drop.

The company has not responded to TheStreetSweeper’s request for comment, but investors may find other viewpoints here.

“I think the people who own the stock right now don’t know what they own,” an analyst told TheStreetSweeper. “The stock’s going up and they’re perpetuating this story of fiber.”

We agree. So, let’s look at why Tucows’ Internet fiber potential is poised to evaporate.

Only two cities – Westminster, Maryland and Charlottesville, Virginia – have announced that Tucows will offer Internet service. While information is too sketchy to estimate potential revenue for Charlottesville, our analysis indicates the fiber revenue will amount to only about $362,000 per quarter for Westminster.

In Westminster – population 18,590 – the city began a publicly funded project last fall to string out 60 miles of fiber optics through the little northern Maryland community.  The pilot project’s first phase is designed to offer faster Internet service to residents in one neighborhood and businesses near the local airport.

The city funded the $6 million first phase through the bond market. Building the remaining three to four phases is expected to take another three years or so and to cost another $9 million … So a question mark hangs before this little town. Where to get the remaining $9 million?

Even if the entire city does gets access to the fiber network, the opportunity in Westminster is unfortunately tiny – even if Tucows’ Ting sold service to every single man, woman and child in town.

Apparently no Westminster customers have actually received service so far. But let’s model an extremely unlikely situation in which every household and every business in Westminster purchased Tucows service.

The table below shows revenue in the unrealistic scenario in which each one of the 7,161 households in Westminster and all 131 of its businesses sign up for one of Tucows’ price plans:

Keep in mind that residents would sign up for either the $19 or $89 residential plan and the businesses would subscribe to the $139 business plan.

If 100 percent of Westminster signed on with Tucows, the company would gross a maximum of ~$7.8 million per year.

So let’s assume Tucows gets wildly lucky and signs on 100 percent of businesses and 25 percent of households.

The chart below shows how much we estimate Tucows would put in the piggy bank in the first year under that terrifically optimistic scenario.

We assume the same 50-50 revenue split between the city as network owner and Tucows as service provider that is seen in the cell phone business. And … Yikes! Tucows’ gross margin squeezes down the already-paltry revenue to just $1.45 million for the whole year!

Watch Your Step In Tucows Country – Charlottesville Poised to Disappoint

The potential in Charlottesville, Virginia appears rather trivial for Tucows, too.

Armed with little more than its 2012 wireless acquisition, Ting, and a reputation for selling domain names (even earning a spot on the US government’s “Notorious Markets” report amid a complaint Tucows failed to act when notified that fake online pharmacies used Tucows’ domain names), Tucows now faces established big bulls in town, Comcast and CenturyLink.

Unfortunately, Tucows has not announced a single commercial service agreement thus far. In fact, this fiber roll-out map and this explanation that the initial plan is to reach 12,000 homes indicate that Tucows’ initial roll-out apparently will not serve the University of Virginia – which should have been Tucows’ most desirable target customer at 20,000 students strong.

Let’s watch our step here in Tucows country. A carefully crafted press release suggests that Tucows is somehow on par with gigabit-per-second giants AT&T and Comcast.

“I am thrilled with how the network and the service are coming along and delighted for the people of Charlottesville, but I am not at all pleased with the timing of this press release,” grumbled Elliot Noss, CEO of Tucows and Ting. “AT&T and Comcast have managed to get press releases out years before their Gigabit services have come to market. Ours comes over a week after launch. We clearly need to pick it up a notch.”

But, according to the Ting blog designed to keep Charlottesville informed about the fiber rollout, things are going very slowly. It appears that only three streets have been lit up after several months. It’s tough to scale up.

Going forward, a big problem is that Tucows will be hard-pressed to fund the super-expensive process of digging up the earth and laying the rest of the fiber through the entire town.

So it’s left with simply trying to be an Internet service provider in a limited area unless it can craft a deal with the city – likely difficult considering the AT&T and Comcast presence – or unless it does something like offer a massive capital raise that would dilute current shareholders’ stock value.

The stock began to bolt after the first quarter financials released May 7 showed $2.8 million in profit.

When the Charlottesville and Westminster fiber deals were announced June 15 and June 26, Tucows shares continued to run up like a bull in a china shop.

As the weeks and public relations hype ticked by, the share price ran jaggedly upward as investors bought the well-crafted hype.

One day the company’s market valuation was ~$200 million. A month later, the valuation exceeded $300 million.

So who was buying at these elevated levels? Well, it sure wasn’t insiders.

Some company leaders were selling thousands of shares of their company. Co-chairman of the Board Rawleigh Ralls sold 65,000 shares in May alone.

And right around the corner, more insiders had their fingers resting on the “sell” button.

Indeed, with 26 sells in the last year – and 14 just in the last three months – company officers and directors have stayed busy unloading their stock. 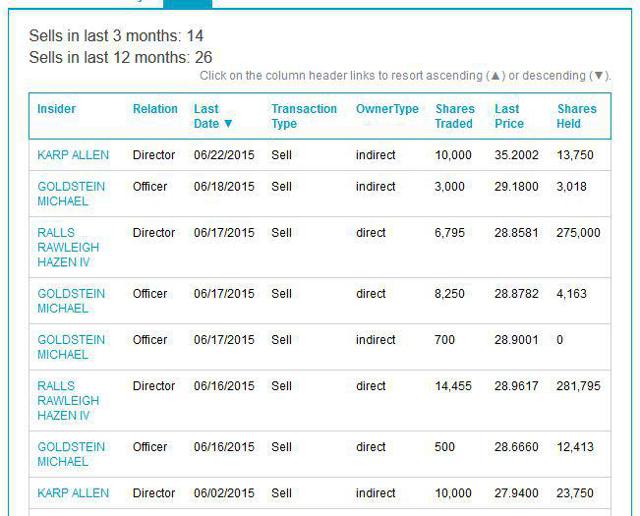 One glance at the graphic below shows the insider trading trend – no buying for some time and even then, the meager buys were cheap option executions.

So, are these insiders beginning to worry that the stock price has peaked?

And with the price at current levels, how soon will they dump more stock?

Tucows bought Ting in 2012 and its “Ting Mobile” wireless business provided good growth in 2013 and 2014. However, growth is slowing and the many well-known competitors make for tough going.

Unfortunately, Sprint’s policy change made things worse. Sprint’s February 15 change to the criteria for devices eligible to activate with Ting Mobile caused much frustration, dropped new accounts and remains an issue going forward, according to comments during the May 7 earnings call by CEO Elliot Noss:

“… an alarming 70% of devices that people were trying to activate on Ting Mobile were rejected, including many devices that were perfectly eligible by all stated criteria. We worked hard with Sprint over the next several weeks to identify errors in the process and correct them, leading to the number of rejections falling to 30%. There are still a couple of outstanding issues and we continue to work with Sprint to address them.”

Investors cannot afford to be naïve about this issue. Mr. Noss said:

“There was a rippling effect on our acquisitions. Customers were frustrated about wasted purchases and confused about how to find an eligible device going forward.”

We believe Sprint’s change in policy constitutes more than a temporary setback. Frustrated customers will throw up their hands over Ting Mobile. Word will spread.

Indeed, the Sprint policy damages much of Tucows’ opportunity in this field. The time is right for well-heeled giants in the mobile phone and services field who will happily scoop up Ting’s old customers, as well as potential future customers.

Tucows has been trying to reinvent itself with the fiber and mobile businesses because its legacy domain name business has been declining … essentially butted by technology giants like Amazon and Microsoft along with the heavily advertised, April public offering, GoDaddy.

Check out this chart comparing revenue and advertising expenses for GoDaddy and Tucows.

Quarterly revenue from Tucows’ prepaid domain name registry and associated service fees dropped to $1.46 million last quarter versus $1.82 million for the same period in 2014. Since then, Google has stepped into this highly commoditized domain business and can undercut Tucows’ prices.

Here’s what Tucows’ chief financial officer said in the May earnings call:

“Breaking Domain Services down into its various revenue streams gross margin for the wholesale component of Domain Services decreased by $144,000 or 3% to $5.3 million, when compared to the first quarter of last year. This decrease was primarily due to the $420,000 decrease in revenue from the sale of names and pay per click advertising advertisings through the OpenSRS domain expiry stream.” “As we’ve discussed on past calls, revenue associated with name sales and advertising has been experiencing flat to declining trends which we expect to continue for the foreseeable future. This decrease was partially offset by an increase in gross margin from domain name services of $200,000, largely the result of the benefit we are continuing to experience from a shift in sales mix to higher margin services.”

According to CEO Noss, Ting fiber is not going to produce “what I would call meaningful revenue … through much of the bulk of this year.” Regarding Ting Internet fiber revenue, he further advised the two analysts in the conference call, “in terms of meaningful for this year, I wouldn’t think twice about it.”

Our research indicates the potential revenue for fiber is even worse than described and likely will never even approach becoming meaningful. Fiber revenue won’t save Tucows from the faltering domain name business or the commoditized, risk-filled wireless business.

So Tucows can hype the promise of tomorrow until the cows come home… but we think the market valuation will drop well below the current $293 million. We’re slapping a $13 price target on this little ol’ bovine.

Important Disclosure: The owners of TheStreetSweeper hold a short position in TCX and stand to profit on any future declines in the stock price.