Use and Misuse of the Fed’s Dots 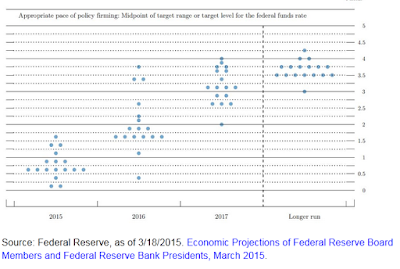 The dramatic reaction to last week's FOMC meeting, which may still not be complete, was driven largely by the Summary of Economic Projections, the infamous dot-plot. This Great Graphic shows the latest iteration.
What riveted the investors was the sharp reduction in the dots compared with December 2014 iteration.  This was the essence of the market's dovish read.
However, talking to market participants and reading various media accounts, it strikes us that there is a serious misunderstanding of what the dot plots represent.   Specifically, the dots are not forecasts.  This is important.  The market tries to forecast what the Federal Reserve will do with policy.  Fed officials are making policy recommendations based on their individual economic assessments.  This is one of the key points in the September 2014 post on the NY Fed's website, Liberty Street Economics.
The dispersion of the dots reflects differences of opinion among Fed officials.  There are many different reasons why officials may disagree with each other.  At the most basic level, the different policy prescriptions may reflect different economic assessments.  Officials may use different models to assess economic present and future economic conditions.  They may derive different measures of full employment or trend growth, which lend themselves to different policy prescriptions.
The dispersion of the dots though should not simply reduced to technocrat exercise  of choosing which model to use.  There is a large role for subjectivity and values.  In particular, individual officials may give different weight to the deviation from the price stability and full employment mandates.  There is also the question of how much overshoot of one can offset the undershoot of the other.  Then there is the Fed's third mandate, financial stability and the risk assessment around it.
Of the seventeen Fed officials, only two do not think it is appropriate for the FOMC to hike rates this year.  Although individual names are not formally associated with individual dots, these two doves are widely thought to be the Chicago Fed President Evans and the Minneapolis Fed President Kotcherlakota.  Evans spoke earlier today and reiterated his dovish stance.
At the other extreme, four Fed officials think that a Fed funds target above 1% by the end of this year will be appropriate.  Of the remaining 11 officials, ten believe that based on their projections the appropriate Fed funds rate will be between 62.5 bp and 87.5 bp at the end of the year.  This remains above where the market expects Fed funds (effective average rate) to be at 41 bp at the end of the year (based on the December 2015 Fed funds futures contract).
In December 2014, a couple Fed officials thought it appropriate to raise rates in March/April.  As this is obviously no longer possible, they had to capitulate.  In addition, note that personnel changes can also impact the dispersion of dots.  One hawk (Plosser) stepped down before last week's meeting, and another hawk (Fisher) stepped down after last week's meeting.  Plosser's replacement does not seem as hawkish.  Fisher's replacement has not been named yet, but in the interim the Dallas Fed's First Vice President Helen Holcomb will fill in, and she is regarded to be of like mind with the Fed's leadership.

Our understanding is that Fed officials are by and large not content with the Summary of Economic Projections. However, there is not a consensus about what to do about it. There is a sense that it cannot simply be dropped. We have suggested that some abbreviated version and a press conference after every meeting, like the ECB and BOJ currently do, would maximize the Fed's flexibility and increase transparency without sacrificing insight and reduce some unintended confusion.