United Technologies Corporation (NYSE:UTX) is a diversified global industrial. It has strong brands, and a highly profitable business model.

As a result, the stock receives a high score using the 8 Rules of Dividend Investing.

It is also a Dividend Achiever.

The company has paid a dividend on its common stock each year since 1936.

With a 2.6% dividend yield, solid dividend growth, and a cheap valuation, United Technologies could be a winning stock pick for 2017.

United Technologies is an industrial manufacturer. Its customers are in the commercial aerospace, defense, and building industries.

It operates in four segments, which are roughly equal in size: 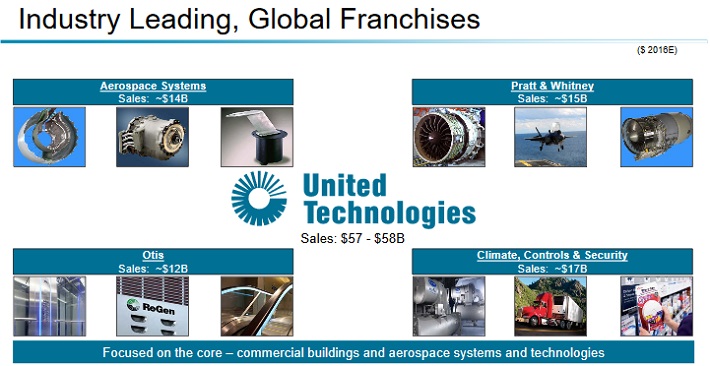 The Climate, Controls, and Security business provides solutions for safer and smarter buildings. Its key brands include Carrier heating, air conditioning, and refrigeration, as well as Kidde and Chubb fire safety products.

Lastly, Otis is the world’s leading manufacturer of elevators, escalators, and moving walkways (hence the pun in the title of this article).

Business conditions are challenging for United Technologies right now. This year, the company has had to deal with elevated geopolitical and global economic risks.

The strong U.S. dollar, Brexit vote, and slowing economic growth in the emerging markets have all weighed on United Technologies. The company generates 62% of its annual revenue from outside the U.S.

And yet, the company has continued to perform very well, despite the higher level of economic uncertainty.

Total revenue and adjusted earnings-per-share from continuing operations increased 1.9% and 5.7%, respectively, through the first nine months of 2016. 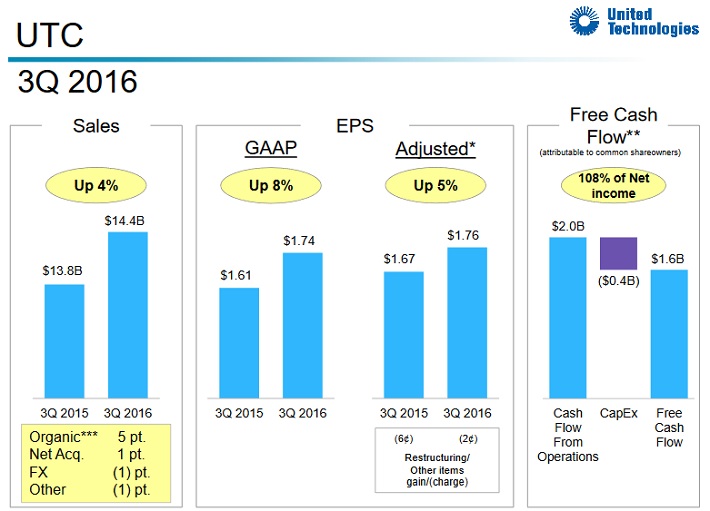 This demonstrates that the core business continues to grow, even though net sales were reduced from currency fluctuations.

The best-performing segment for United Technologies is its Pratt & Whitney division, which has seen strong growth due to improving commercial and military aircraft sales. 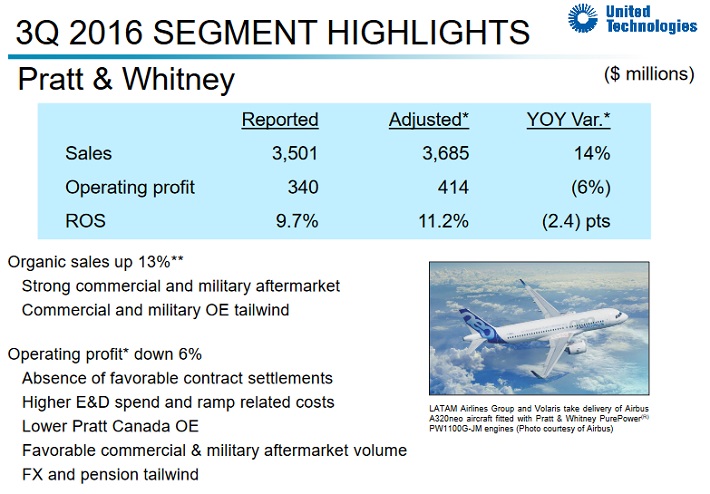 Pratt & Whitney is expected to remain a growth area for the company for the next several years.

United Technologies expects growth to pick up through the end of the decade. The company forecasts strong growth rates across its core business units, particularly for the Pratt & Whitney business. 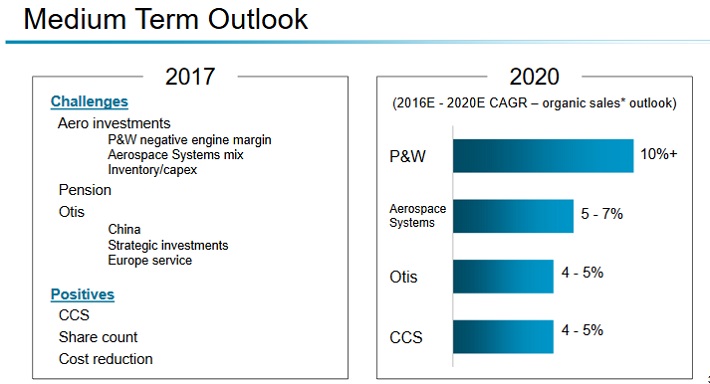 Lastly, United Technologies aggressively repurchases its own stock, which will boost earnings growth. The company utilized $10 billion for share repurchases in 2015. 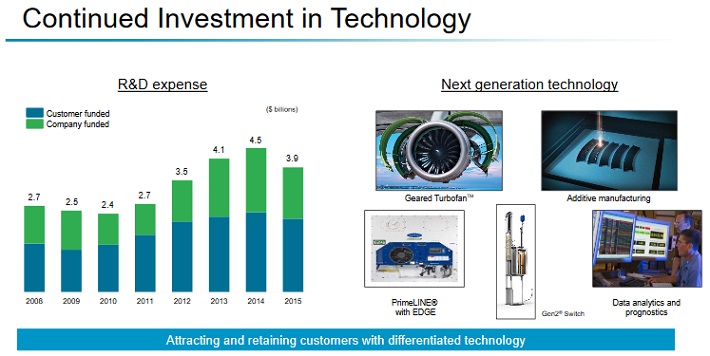 The billions of dollars United Technologies allocates to R&D each year is helping the company to develop next-generation technology across its business segments.

The company also benefits from scale. It has a $91 billion market cap. Its massive size allows it to cut costs opportunistically to boost margins.

United Technologies’ overall SG&A expenses comprise 9.7% of sales, which the company contends is the lowest in its industrial peer group.

Investors should keep in mind that United Technologies is not a recession-resistant business model. As an industrial manufacturer, its earnings are closely tied to the health of the global economy.

United Technologies’ earnings-per-share through the Great Recession are shown below:

The recession took a steep toll on United Technologies’ bottom line in 2009. But the good news is that this proved to be a blip on the radar.

Thanks to its scale, the company can quickly cut costs to remain profitable. Earnings-per-share quickly recovered in 2010 and beyond.

Even a modest expansion of the valuation multiple could yield significant returns. For example, since 2000 the stock has held an average price-to-earnings ratio of 15.

If the stock moved up to a price-to-earnings ratio of 15, it would generate a 25% forward return just from multiple expansion.

Moreover, future returns will be augmented by earnings growth and dividends. Based on management’s long-term forecasts, a reasonable forecast of expected returns could be:

Based on this, I expect United Technologies to generate approximately 8.6%-10.6% annual returns, plus any expansion of the price-to-earnings ratio.

Investors can also expect United Technologies to continue its streak of dividend growth. The company has current annualized dividend of $2.64 per share.

Its forward dividend represents just 30% of the company’s trailing-12 month earnings-per-share. This is a very modest dividend payout ratio that leaves plenty of room for continued dividend increases on an annual basis.

United Technologies is a stock that should appeal to nearly all investor types. It is a growing company, pays an above-average dividend yield, and grows the dividend each year.

In addition, the stock is cheap, and there is room for expansion of the price-to-earnings multiple as its growth strategies materialize.

As a result, United Technologies could be a rewarding stock pick for growth, income, and value investors.  The company ranks highly using The 8 Rules of Dividend Investing thanks to its low valuation, above average yield, and solid growth prospects.