August 20 was the third consecutive down day for the Dow Industrials as the index tumbled 358 points.

The U.S. stock market had managed to hover near record highs, even as other markets (oil, precious metals, housing) had long since fallen from old highs. The 34-year bull market in 30-year U.S. government bonds ended months ago.

The prolonged optimism that created the Dow’s biggest triple top in 150 years may finally be flagging. The just-published August Elliott Wave Theorist says “an era of complacency is about to come to an end.”

Theorist subscribers are also reading about Fibonacci time and price relationships that appear to spell trouble for the Dow’s six-plus year uptrend. 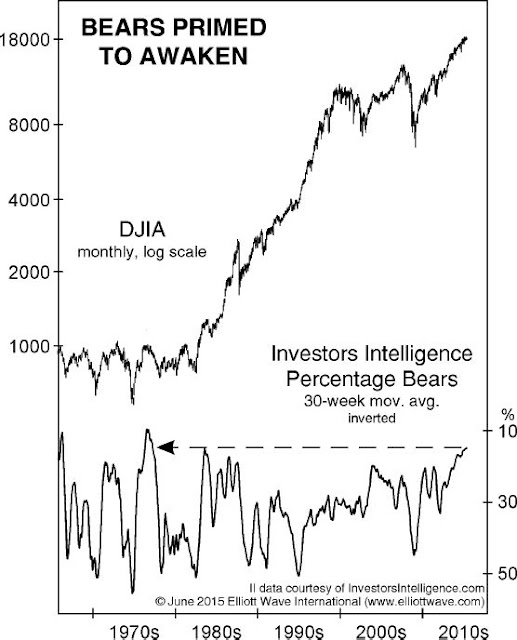 Long-term bearishness is virtually absent. The chart shows a 30-week average of Investors Intelligence bears (inverted to align with prices) plotted beneath the Dow Jones Industrials back through 1966. Bearish advisors contracted to just 14.9% in late May, which is the lowest percentage of long-term bears since early 1977 … .

In April, total assets in Rydex bear funds fell to $130.9 million, the lowest monthly level in 15 years.
Other indicators had reflected the market’s deep complacency. The S&P 500 recently went 129 days without a single-session decline of 2% or more. And on June 19, the VIX open interest put / call ratio (indicates the ratio of investors’ open option contracts betting on a VIX move) dropped to 0.248, its second lowest level since February 16, 2007.
On July 15, this headline published on NASDAQ.com:

The August Financial Forecast provides another perspective on investor complacency:

In July, it reached a remarkable new extreme as bulls used complacency itself as another excuse to buy stocks. “The failure of the Greek standoff or the China stock market tumble to rupture global markets or drag down economic expectations has led to a rapid draining away of anxiety,” says a major news site.

Sentiment extremes are important because markets tend to turn when most investors least expect it.