U.S. New Home Sales Jump to 7-year High? Must Have Been a Cold Winter…

EconMatters- March 25, 2015, 2:23 PM EDT
SHARE ON:
Do you know how cold it was up north this year? How cold was it?  It was so cold up north this year that old people like me bought houses in Florida.  The headlines said that new home sales boomed:
U.S. New Home Sales Reach Highest Level in Seven Years
Blared the Wall Street Journal. It subheaded:
Sales of newly built single-family homes increased 7.8% in February to annual rate of 539,000

For a minute there I thought I was reading the National Enquirer. But the Journal was not alone. All the major media outlets were kvelling over the news. The Journal went on to say “New-home sales rose to the highest level in seven years in February, a sign of strong demand that could help boost the broader U.S. housing market.”

That’s the ticket! Strong demand! Housing is back, America! Low pay, unqualified borrowers are back, and we’re selling over a half million houses annually!

Behind that headline, a bump in southerly migration joined with the usual random noise in February in other regions to send the number reported by the back slapping, self-congratulatory, Washington-Wall Street media echo chamber, to da moon.

As usual, they were annualizing a monthly, seasonally adjusted, abstract impressionist interpretation of loosely estimated reality. In other words they multiplied the seasonal adjustment error plus the huge sampling error that is a feature of the first release of this data, times 12. To its credit, the WSJ did point out in a later paragraph that “February’s advance estimate came with a margin of error of plus or minus 15.2 percentage points.” 15.2%! Are you kidding me! Why are we even discussing this number?
So annualizing the seasonally adjusted advance estimate launched the headline number into outer space, in an arc almost certain to crash back to earth in March and April.
The Commerce Department even has an official warning about the oversized revisions that follow the first release, after they’ve had a chance to look at the actual data as it comes in over the next few months.

A necessary part of the process of issuing these early data involves the issuance of subsequent revisions. The revisions to new single-family houses sold estimates are primarily the result of the replacement of imputed data with data which are reported in subsequent months. New residential sales have larger revisions than other residential construction series. This is due to the fact that most of the new residential construction survey data are based on a permit being issued. Since many homes have a sales contract signed prior to a permit being issued, an estimate must be determined for these sales prior to permit authorization.

In other words, they base their estimate for the current month on building permits. That means that if builders who have been sitting on their butts through a frozen winter decide to start a few extra spec homes to get a jump on the Spring selling season, the Census Bureau won’t know that until a few months later. If that’s what happened here, we won’t find out for another month or two as the revisions come in.
Meanwhile, here’s what this month’s actual number, not seasonally manipulated, looks like on a historical chart. Sales are almost back to the 2008 level, thanks to that surge of southern migration to escape the cold. Prices also rose (but hey, there’s no inflation). It only remains to be seen if this “gigantic” gain in sales will stick when the revisions come in. If they do, I’ll blame the weather. 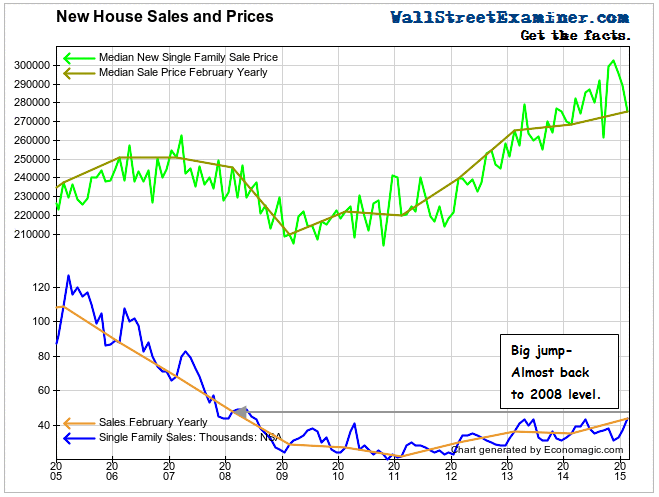 New House Sales- Click to enlarge
Conomists like to blame the weather when the numbers “miss” their expectations. But what about when the number “beats” as it did this time. The consensus of Wall Street conomists was for a gain of 465,000. The headline result of 539,000 blew that away. My guess is that the conomists just forgot to blame the weather!
Baby, it was cold up north this winter. How cold was it? I’ve lived in Florida for 28 years, and I chose this winter to spend in Quebec where we have a second home. Wow, it was cold! One thing I have learned from my years in Florida, many of them working as a commercial real estate analyst, is that housing sales in Florida are relative. The colder it is up north, the more your relatives come to visit. When they come to visit they go house hunting. That often leads to the act of actually buying one, often a second home while they keep the house up north. 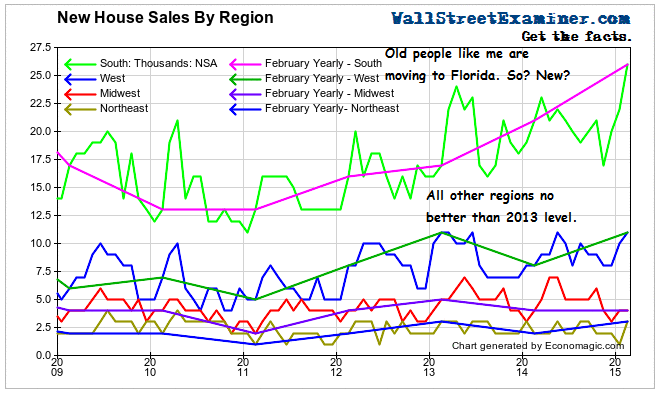 New House Sales By Region – Click to enlarge
Voila. The data shows that’s exactly what happened this year–a massive surge in sales in the South and a good sized bump in the West, which includes sunny California and the Southwest. But even the West did not exceed the peak level reached in 2013. Nor did the Northeast or Midwest, where sales have remained moribund for 6 years. The entire housing recovery story has been based on that southward migration, driven by the demographic wave of boomers retiring. There’s no growth here, just people getting old, and tired of freezing their asses off in the winter.
One last point–along with this “growth” story, we must thank the almighty Fed for it’s perspicacity in promoting programs to help the average Joe. Here’s an example. It’s the spectacular growth of affordably priced homes for the “middle class” family. 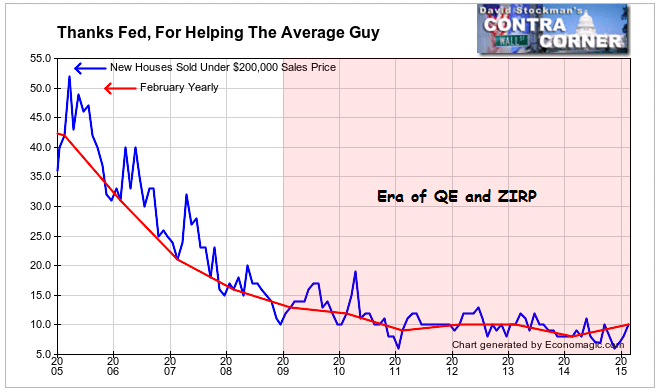 What a country! What a policy! We would we be without the wise leadership and policy making of the Fed? I’ll leave that up to you to answer.
Research Report
analyst ratings
blogger opinions
investor sentiment
news sentiment
analyst ratings
insider activity
hedge funds
stats charts
You May Also Like