The market has been trading at fairly expensive levels since the first of the year. With a current PE of nearly 21, it clearly needs economic and earnings growth to move higher. Unfortunately, last week’s news and the general earnings backdrop are not cooperating. First quarter GDP was reported at a meager .2% while Y/Y revenue growth contracted 4.1%. This led to small caps (both the IWM and IWC) breaking uptrends while the larger averages continued to languish. We’re again left with a picture of markets starved for bullish news and not receiving any.

The increase in real GDP in the first quarter primarily reflected positive contributions from personal consumption expenditures (PCE) and private inventory investment that were partly offset by negative contributions from exports, nonresidential fixed investment, and state and local government spending. Imports, which are a subtraction in the calculation of GDP, increased.

Every sub-category was negatively impacted in some way. Personal consumption expenditures only increased 1.9%, with durable goods purchases up 1.1% and non-durable purchases decreasing .3%. Curiously absent is any spending boost from the drop in fuel prices. Investment only increased 2%, largely due to a massive 23.1% drop in non-residential structures caused by the decline in oil related outlays. Exports contracted 7.2% thanks to a strong dollar while weak defense and state/local government spending contributed to a .8% decline in government spending.

In their latest policy statement where they kept rates unchanged, the Fed attributed the first quarter slowdown to transitory factors: “Information received since the Federal Open Market Committee met in March suggests that economic growth slowed during the winter months, in part reflecting transitory factors.” While a strong winter will obviously give way to warmer weather at some point, other reasons for the slowdown may be less transient. Although oil has clearly bottomed, there is still ample supply in the market to depress prices. Meanwhile, the dollar is the only bullish game in the currency market. Recent US weakness may compromise that position somewhat, but other regions are simply weaker. It’s possible the economic malaise could continue for at least one additional quarter if not two, which could make the overall slowdown permanent.

For the last 4-6 weeks, I’ve been concerned about the lack of “confirmation.” For example, although the SPYs broke to new highs a few weeks ago, the transports and NASDAQ failed to follow through. This lack of overall breadth is a cautionary development, indicating that the degree of bullishness is weaker than it appears. Last week, weakness emerged in the small caps: The IWMs (top chart) and IWCs (bottom chart) have both been in a rally since early October. Last week, both fell through their 6 month trend lines, each printing strong, bearish bars. Their respective MACDs also printed sell signals.

The SPYs are still trying to make new highs: 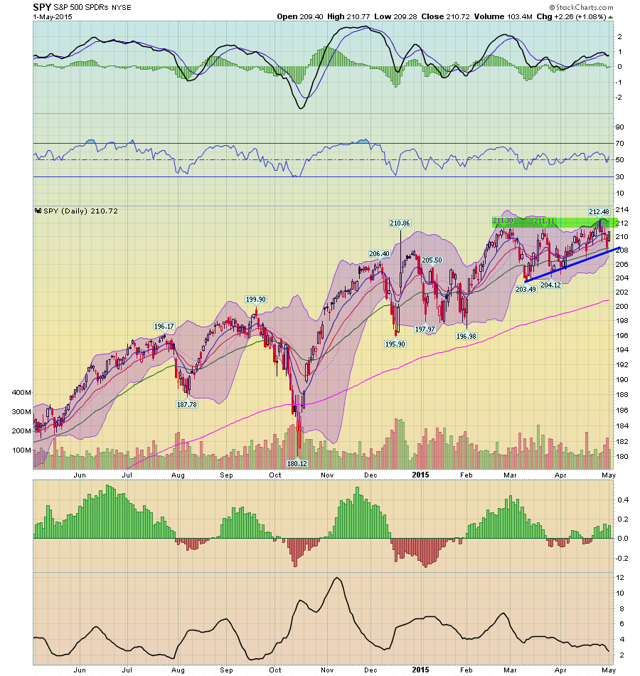 Prices have again hit topside resistance at the 211-212 level, as the chart’s lows form an ascending triangle pattern. The transports are confirming this weakness: Here prices are still trading between 153 and 167. But now they are using the 200 day EMA for technical support – a clearly bearish development. The MACD is negative and is about to give a sell signal.

The combined interpretation of these charts is the markets are in a weaker state. Earnings are not helping: The above table is from Zacks Investment Research. So far, the S&P 500 index’s revenue is down 4.1% Y/Y. Even removing oil’s 33.9% contraction, they are still only up 1.9%. Moreover, oil is not solely responsible for the index’s top-line weakness. Auto revenue dropped 4.5%; basic materials revenue is off 10.5% and industrial products revenue contracted 4.1%. Conglomerates top line took a 7.8% hit thanks to a stronger dollar. Earnings are better, with the index’s bottom-line numbers up 4.7%. These numbers, however, are far easier to massage, taking some of the strength out of their positive ramifications.So, we’ve back to the same situation we’ve been in since the first of the year. An expensive market needs economic and top line revenue growth to continue moving higher. But a strong dollar, weak oil and, to a lesser extent, weather are putting up road blocks. So the market continues to inch higher but then falls back on disappointing news. Until the fundamental picture changes, there is nothing to think this scenario will change.
Research Report
analyst ratings
blogger opinions
investor sentiment
news sentiment
analyst ratings
insider activity
hedge funds
stats charts
You May Also Like