About the Author Scott Carmack

Scott Carmack has 15 years of capital market experience. He has worked for the JPMorgan Private Bank, been a proprietary trader, has four years of Portfolio Management experience, having managed the Leader Capital Short-Term, and Total Return Funds from 2012-2015. Currently, he is the CEO, Founder, and Portfolio Manager at Holbrook Holdings.

The upsurge in sentiment post-election means equity prices are dependent on underlying fundamentals.

Expect a short-term correction to the Trump Treasury Tantrum and Trump Equity Rally.

Maya Angelou once said, “When someone shows you who they are believe them; the first time.” The market action in the fourth quarter unequivocally contextualized itself and revealed itself to investors. Stocks are in a late stage bull market and treasuries are in an early stage bear market. Investors would be wise to heed Q4 market action since there will likely be follow-through in 2017.

The most over-utilized mantra, post-recession, has been “the most hated bull market of all time.” I can’t debate the veracity of the cliché, since sentiment has been negative as reflected by many indicators. In fact, much of Holbrook’s 2016 investment thesis was predicated on sour sentiment. In May, we published ” Pocket Aces – Play or Fold” where we wrote:

“Over the next six months, market pundits are going to continually question why this market keeps moving higher. They will try to pinpoint fundamental reasons why the equity market is undervalued, or that economic conditions are improving. These may be true. They may not be. But the reason we will move higher, is because of positioning. Bearishness prevails, and the street is underinvested.”

Our other premise was that economic fundamentals would continue to improve. The first half of 2016 challenged this assessment. An earnings recession, weak manufacturing data and a strong dollar all conflicted with a view that the economy was still on a path to recovery. Ultimately, however, we opted to focus on the strength of the job market and the health of the consumer (which accounts for two-thirds of GDP). It was this focus, and the belief that a recession was not imminent, that enabled our February 17th market call in “S&P 500: Market Correction or Bear Market Beginning?.” In it I wrote, “I am in the camp that the lows are in for 2016, and at some point, this year we will be talking about new all-time highs on the S&P 500.” We had the opposite position on bonds, where the treasury market was exhibiting tell-tale signs of euphoria. We outlined the risk of a spike in yields in “Sell in Fall for a Market Stall?” We concluded that:

“Valuations are stretched and the trade is incredibly one-sided. Treasuries have performed admirably in 2016, but tactically adjusting exposure downward is a prudent option. Spread products such as investment grade corporate bonds, high yield, floating-rate, and TIPS offer better risk-reward scenarios in fixed income portfolios where durations are shorter and yields are high enough to buffer an unexpected rise in rates.”

We enter 2017 with a different paradigm. To quote Bob Dylan, “times they are a-changin’.” Post-election sentiment has surged, and thus, our market projections can no longer rely on excessive pessimism as a driver for future returns. We are now in a “show me” economy where bad news will be interpreted as such. Equity mutual funds have had substantial inflows for the first time in years, and fixed income funds have experienced outflows. The Great Migration may just be getting underway. As such, Holbrook expects there to be follow-through in 2017, but increased investor sentiment means the “easy” money has been made. Below is a framework for market performance based on sentiment and fundamentals. 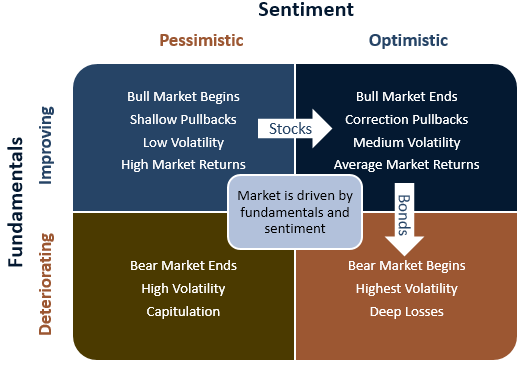 The upper-left quadrant represents the post-recession market of the last seven years. Improving fundamentals against a backdrop of investor pessimism generally result in a market characterized by shallow pullbacks, low volatility and high market returns. As investor sentiment improves, asset prices are driven by underlying fundamentals. Volatility increases as excess cash can no longer absorb selling pressure. Pullbacks are deeper to entice sidelined cash back into the markets. And finally, market returns become more dependent on long-term organic earnings growth, limiting upside. This is where the equity market is now, the upper right quadrant. Meanwhile, the treasury market is making the difficult transition into the lower right quadrant. Decades of disinflation, low-growth, and dovish monetary policy culminated in excessive optimism for safe-haven assets. Meanwhile, fundamentals are deteriorating and likely to get worse. Wages and inflation are rising, potentially exacerbated by a new era of protectionist trade policies. And, fiscal stimulus will increase deficit spending and outstanding treasury supply. Viewed in this context, rates are likely to continue to move higher, and the post-election spike in yields could just be a drop in the bucket.

While 2017 risks are elevated due to the improving investor sentiment, Holbrook believes economic fundamental strength will merit follow-through. Personal consumption will remain strong. Meanwhile, private investment and government spending will add to overall growth given the new administration’s likely focus on tax reform and infrastructure building. Our base case scenario for 2017 growth and our asset class targets are below, which we outlined in our “2017 Outlook: Investing for Trumpflation.“ 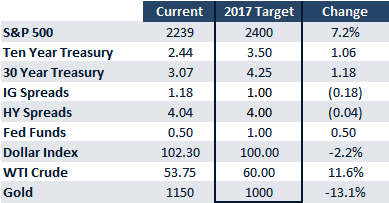 Corrections are healthy and short-term positioning is flashing red

While Holbrook expects risk-assets to do well in 2017, they are susceptible to a pull-back after the new year. Short-term trading indicators are overbought. Sentiment indicators are excessively bullish. And volatility is subdued. The chart below illustrates that short-term corrections usually follow when the Put-Call ratio drops below 1.3 on SPY. 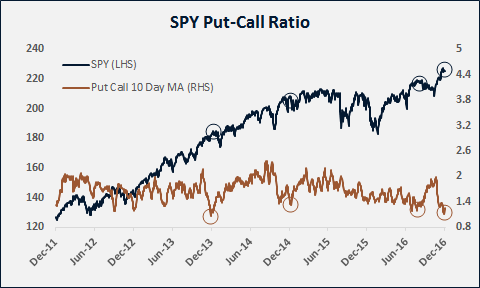 The overall market is still following a textbook breakout and Holbrook expects this trend to continue. Market breadth is strong, and leadership is coming from the cyclical sectors: financials, industrials, and commodities. However, a short-term pull-back would not be surprising, especially since tax-related selling has been pushed forward to 2017. Otherwise, when viewed in the context of a likely corporate tax cut and improving earnings, valuations are not stretched, and this market has room to run.

Alternatively, short-term positioning in the fixed income market has become excessively bearish. We expect yields to rise in 2017, however, treasuries are likely to rally in the near term. 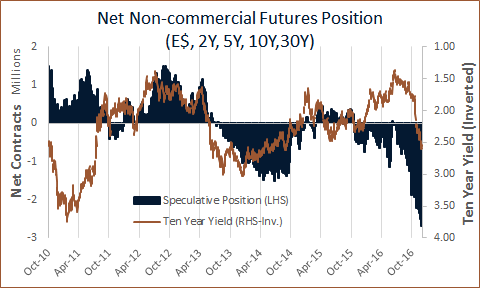 The chart above shows the combined net speculative short position for the Eurodollar, two-year, five-year, ten-year, and thirty-year contracts. Speculators have their most short exposure ever, and thus, until these positions are covered, a further selloff in treasuries is unlikely. Look for yields to fall in the next couple of months. Investors with high duration exposure should look to pare holdings into this rally.

Fundamentals in crude have started to improve: OPEC is cutting production, and global demand continues to inch higher. U.S. shale drilling will continue to be the swing producer and shadow supply will likely keep a lid on crude prices. Holbrook has a $60 target on WTI in 2017, however, in the near term, speculative positioning has become a bit too exuberant. Net non-commercial longs are close to 500k contracts, the highest since the summer of 2014. Given this bullish positioning, we think crude is ripe for a correction. 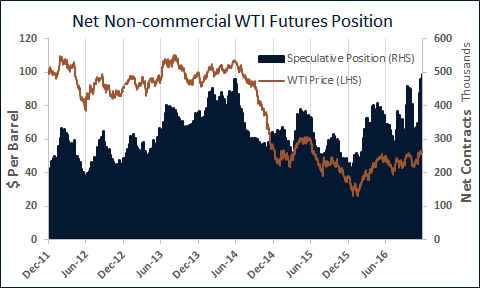 If there is one asset class that is vulnerable from both a sentiment and fundamental basis, it is gold. Real yields have driven the price action over the last decade. As Central Banks reverse their Quantitative Easing, real yields will continue to move higher, and the price of gold will likely move lower. Speculative longs are still high historically, and until there is additional deterioration in sentiment, gold will not find a bottom. 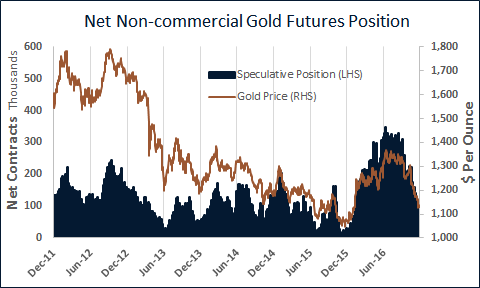 Fundamentally, the U.S. dollar has every reason to rally. U.S. growth is robust compared to other developed economies. Interest rate differentials are increasing. And finally, wage growth and reflation have taken hold in the United States. However, the market has already discounted much of these forces. What the market is not expecting is: upside surprises to Eurozone and Japanese growth, potential tapering from the ECB, disappointing follow-through from pro-growth Trump initiatives, and a willingness of the Federal Reserve to let the U.S. economy “run hot.” Given that speculative positions in the EUR/USD cross have been decisively short for the last three years, Holbrook believes there is a risk of dollar weakness. Moreover, an unexpected exit from the Eurozone by the likes of Italy or Greece would likely provide upside pressure to the Euro. 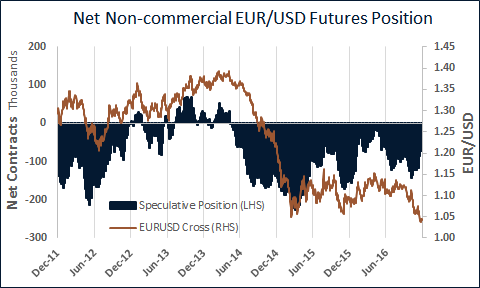 The hated became loved, and the loved became hated. The market feared a Trump election, just as it had feared a Brexit. The after-hours knee-jerk reaction to the Trump victory was for risk assets to plummet, and a flight-to-quality (gold, treasuries) ensued. However, the market plunge that many market forecasters had expected in response to a Trump victory lasted for just a few hours. By the close on November 9th, the stock market had recovered, risk-free bond yields were higher, and gold, the supposed Trump hedge, was in free fall.

Post-election, there was follow-through. The political narrative shifted from fears of protectionism to the benefits of tax-reform and infrastructure spending. Like it so often does, sentiment drives market performance, and market performance drives headlines. Overall, most asset classes ended the year positively. Even treasuries and gold, despite the acute selloff in Q4, managed to stay firmly in the green. Fourth quarter and 2016 performance for various asset classes are listed below. 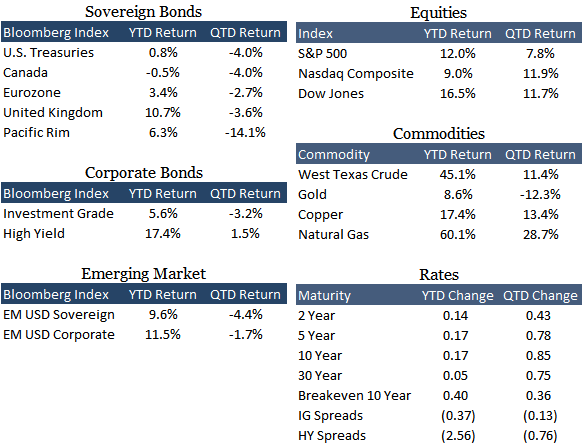 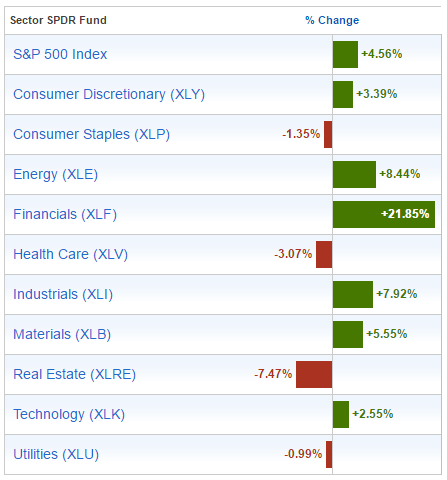 The Trump election was a catalyst for global market action in Q4. However, it is important to note that many of the trends post-election were already established. Interest rates in the U.S. bottomed in early July. Wage growth has been accelerating since 2012. Cyclical sectors such as industrials, financials, and basic materials were already leading broad indices higher. Fear, pessimism, and defensive investor positioning were starting to reverse. Fundamentally, the economy post-election looks very much like it did prior to November 8th. The only substantive change has been the uptick in sentiment for businesses, consumers, and investors. This is a marked change from the post-recession market to which we have become acclimated. It means that fundamentals will need to support markets. It means that pullbacks will be deeper. It means that equity returns will depend on earnings growth. Markets can, and likely will, forge ahead. But the “easy” money is over.