EconMatters- June 2, 2015, 5:31 AM EDT
SHARE ON:
Water doesn’t flow uphill. It’s a lesson in physics so basic that even schoolkids know it.

In fact, everyone knows it… 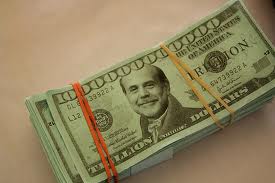 Everyone except – apparently – the world’s central bankers.

In their rush to provide liquidity to banks through experimental stimulus programs like “quantitative easing,” central banks have failed to create the usual cascade of liquidity normally associated with massive money-printing shenanigans.

Indeed, by attempting to force-flow money uphill, liquidity in the all-important bond markets essentially has been drying up. Central banks have been taking bonds out of circulation, warehousing them on their own balance sheets.

As a result of this attempt to defy the laws of financial physics, we’re now frighteningly vulnerable to a bond-market crash. And the best potential remedy – opening the sluice gates – can’t be employed because liquidity isn’t in the reservoirs where it’s needed.

Today I’m going to show you how this financial-market Disruptor came into being. I’m also going to explain how ruinous it could be to the economy, to the bond market, to the stock market, and to you.

The “Little” Activity That Makes the System Run

In the past, when the U.S. Federal Reserve wanted to do its part to stimulate the economy, it might first announce its intention to lower interest rates – and might even announce a “target rate.” The interest rate they targeted was the “repo” rate.

Repos, short for repurchase agreements, are very-short-term interbank loans where one bank offers up U.S. Treasury bills, notes, or bonds as collateral for an overnight loan from another bank – and repurchases (buys back) that collateral the next day, or a few days later, depending on the term of the repo agreement.

When that first bank buys back its collateral, it pays a little more than it borrowed – which is the “interest” the lending bank earns.

That interest, when expressed in percentage terms as a “rate,” is the overnight rate, or the “repo rate” – and serves as the base rate for all banking loans.

If banks can borrow cheaply from each other because the repo rate is low, they will borrow a lot and use that money to make loans throughout the banking system.

The Fed doesn’t directly control the repo rate by mandating what it is. The repo market is a free market where the repo rate is set by traders engaged in repurchase agreements every day. All big banks have repo desks.

If Fed central bankers want to lower the repo rate, they can announce what they want it to be. But that doesn’t always cause repo traders to adjust the rates they charge for overnight loans.

So, the Fed has its New York Bank – which conducts all the U.S. central bank’s “open-market operations” – actually go into the repo market and offer loans at cheaper rates than other banks are offering. In other words, it’s effectively trading overnight money by making it more available in order to bring down the cost of overnight borrowing by big banks.

All Wheels and No Grease…

In theory, that cheaper base-borrowing rate for banks that I just described for you is supposed to work its way through the financial system. By that I mean it’s supposed to get translated all down the line into cheaper loans for banks’ commercial and retail customers.

During the financial crisis, big banks weren’t lending to each other. They were actually afraid that their “counterparties” – the other big banks – would go out of business… meaning the money they loaned might not be repaid.

The repo market essentially seized up.

And that left America’s central bankers with a big challenge.