In our recently published Fall 2015 Investor Letter we discuss the long awaited third quarter market correction and issues issues facing companies in the fourth quarter and the first half of 2016. Prior to the market decline that began in May, the S&P 500 Index climbed higher for nearly four years without incurring a greater than 10% correction; however, based on current price to earnings multiples, U.S. large company stocks are trading at average valuation levels compared to historical data. 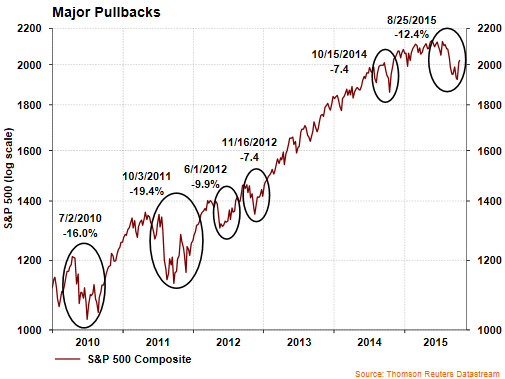 U.S. company earnings are expected to decline 4.8% in the third quarter compared to the third quarter of 2014. Excluding the greater than expected 60% year-over-year decline in energy sector earnings, the balance of companies are expected to report an increase in earnings of about 2%. A decline in earnings is generally associated with the onset of recessions; however, as noted in the newsletter, an earnings recession does not always precede economic recessions. U.S. company earnings reports are facing the headwinds from a stronger U.S. Dollar while energy and materials company earnings are being pressured by low oil prices. The newsletter notes this earnings weakness is expected to be transitory with growth resuming in the first half of 2016 when year over year earnings comparisons to prior quarters become easier. Based on current price to earnings multiples, U.S. large company stocks are trading at average valuation levels compared to historical data. Additionally, it seems reasonable to believe recent earnings weakness is temporary and concentrated in the commodity and energy sectors.

While worldwide growth has slowed and the risk of a global recession is heightened, we believe a U.S. recession is unlikely at this time; however, investors should be prepared for a higher level of market volatility in this environment. While short-term volatility can rattle investor confidence, it is important to maintain a view of the horizon and the opportunities and rewards of longer term investing.