“There is only one boss. The customer. And he can fire everybody in the company from the chairman on down, simply by spending his money somewhere else.”

Never were those words felt more acutely for those on the Walmart payroll than right now. Reason being: Over the last year, the eponymous Walmart “customer” has, indeed, taken his business elsewhere, fueling a series of epic setbacks for the retail giant:

In the words of a March 31 Bloomberg: It’s “the end of an era for Walmart.”
Which leaves one question: How the heck does a big-box behemoth go from retail victor to re-fail victim?

Well, according to the mainstream experts, the main cause of Walmart’s woes are many-fold, from falling oil prices – to – China’s flailing economy – to – the extinction of the brick-and-mortar store – to – the biggest baddest culprit of all, the brawny greenback:

Economists can always be counted on for providing endless explanations as to why a corporate king gets dethroned — after the fact. But in our opinion, one’s time and energy is better served anticipating those turns. Which is exactly what our analysts did in regard to Walmart’s reversal of fortune — starting with our September 2013 Elliott Wave Financial Forecast’s bearish call for Walmart stock:

“We’ll stick with our contention that the economy is turning toward a deflationary depression. This long-term chart of Walmart is another under-the-radar clue to the unfolding debacle.

“It shows the world’s largest retailer completing a five-wave rally that dates back to the early 1980s. As consumers go on a buying strike over the next few years, Walmart’s stock should fall by at least 50%.” 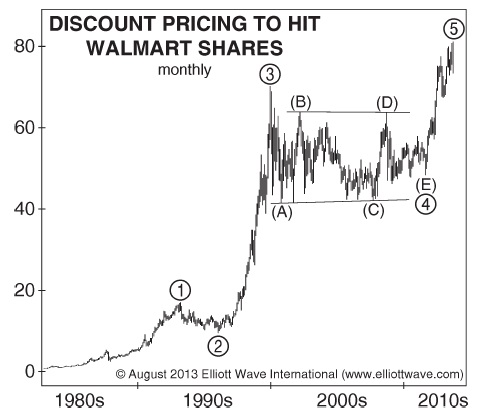 From there, Walmart made one more new high at $90.97, after which the anticipated downside drama arrived in full force, with shares plunging 37% to end at a four-year low in November 2015.

Which brings us to the larger issue at hand: Walmart’s struggle to convert “always low prices” into always higher profits goes hand in hand with the underlying trend in the U.S. economy: that of deflation.