The End of Cable Companies

EconMatters- April 27, 2015, 8:33 AM EDT
SHARE ON:
In today’s age of rapidly advancing technology and mind-blowing innovation, it’s pathetic that some things we use every day are still stuck in the Dark Ages. 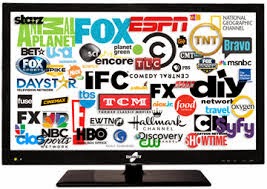 Take our home entertainment packages, for example.
If you’re a cable customer, you know all about the infamous “bundle” package, where your provider groups internet, cable television, and telephone services into one.
At first glance, the deal seems attractive. But you always end up paying more than you want. It’s one of the biggest rip-offs you’ll experience as a consumer.
There’s a reason companies like Comcast Corporation (NASDAQ:CMCSA) are so universally despised.
Fortunately, those days are coming to an end – and the list of winners and losers from this shift could be surprising…

One Size Does Not  Fit All

You know the deal: While a basic TV package is pretty cheap, you get a basic selection of channels. Most stations that Americans watch are excluded and there’s no high-definition quality, either.
From there, the selection catapults aimlessly up the scale – a “basic-plus” kind of package, which can cost upwards of $50 per month, and is stuffed with a ton of channels that you don’t want.
For a more comprehensive selection, you’re usually forced to fork out more dough for an even higher-priced package… with even more channels you won’t watch.
And if you want regional sports, or ethnic programming from your homeland… watch out… there’s yet another “bundle” for that.
You can’t just order “a la carte” and tell the cable company, “I’m from Greece – give me a couple of Greek channels for a few bucks a month.” No… you’re forced to buy an “international programming” package for $10 more, where you get Greek channels, plus Japanese and dozens of others that you’ll never watch.
But this archaic nonsense will soon come to an end…

Breaking Free of the Bundle

The beginning of the end for bundling was the DVR. While you still obviously need to receive a certain station in order to watch recorded shows, not only are DVRs much easier to use than old-school VCRs, they free people from the TV schedule. Viewers are now able to watch many more shows – and even entire seasons – at their leisure than ever before.
This, coupled with faster broadband speeds, paved the way for the rise of services like Netflix, Inc. (NASDAQ:NFLX), Amazon.com, Inc. (NASDAQ:AMZN), and Hulu, which offer syndicated shows and current programming just a day or two behind the real-time airing – just when you’d have watched it on the DVR anyway.
Add to that a wide inventory of movies, and eventually, some high-quality original programming, and all of a sudden, customers have some major reasons to avoid paying for a big cable bundle.
Even HBO got into the act recently, proposing to offer its programming over the internet via an exclusive deal with Apple Inc. (NASDAQ:AAPL).
In response, cable companies are starting to weigh their alternatives…

Dear Cable Companies… The End Is Nigh

FiOS, the internet and TV service from Verizon Communications Inc. (NYSE:VZ), just introduced a “customized” bundle of 55 or so channels. It includes some basic cable channels (mostly low-rated ones) and the chance to choose whether your additional channels (the ones people actually watch) are “lifestyle” channels, sports channels, kids’ channels, etc.
Sounds great in theory. But unfortunately, the program is hopelessly confusing so far. Nobody seems to know whether choosing these mini-bundles actually saves anyone any money.
Ultimately, though, this is nothing more than a Band-Aid. Verizon and other cable companies are just trying to delay the inevitable.
Let’s take a closer look at the winners and losers in this new reality. Some of the answers may surprise you…

The Winners and Losers From a Cable Shakeup

Cable Loser #1: Cable Companies
Fewer people want large bundles of channels. And fewer still will care when a show is “scheduled.” Not when on-demand streaming TV services are proving increasingly popular.
What’s more… as more content becomes available to stream, more people will decide they simply don’t need cable at all. And if they do, they’ll only need a few channels, like local content. In the long run, the “cable” part of cable companies’ businesses may be destined to go the way of the telephone landline.
Cable Loser #2: Small Cable TV Channels
Another group of losers will be unpopular general-interest cable TV channels. Many of these channels actually pay the cable companies to run them, while others are available for free or very cheaply.
Basically, any money they make is through advertising. But as fewer people even have access to these channels – either because they haven’t selected them in a small bundle, or they’ve cut the cable completely in favor of streaming their content – these channels will see their ratings shrink to almost nothing. As a result, they’ll be all but invisible and meaningless to advertisers.
Winner #1: Niche TV Channels
Note the difference here between “small” channels and “niche” ones. These stations aren’t the general-interest ones with small viewership figures, but rather, they’re specialized ones like foreign language channels and religious programming, which do have a loyal following.
With more people becoming accustomed to streaming, these channels may finally be in the enviable position of receiving revenue from their customers, rather than paying cable companies simply to reach viewers.
Winner #2: Large Cable Channels
Also “winning” will be the bigger cable channels and other providers with valuable or popular content. Having customers pay them directly, rather than having a cable company scoop a big chunk of revenue off the top, will be a huge boon.
But there’s one other surprising loser from the equation…

No Slam Dunk for the Go-to Sports Network

One of the most popular cable TV stations is undoubtedly ESPN – the giant sports network owned by Walt Disney Co (NYSE:DIS).
Given its popularity, it might surprise you that ESPN would be a loser here. But it’s possible.
First, it’s currently complaining that the FiOS “mini-bundles” I referred to above go against Verizon’s contract with ESPN, since the channel isn’t on its main tier. I’ll leave that legal battle to them, but ESPN faces a bigger problem.
It’s by far the most expensive channel on “basic” cable. The network charges cable companies $5 per month per subscriber – with deals in place to bump that to $8 by 2019. That’s a pretty big chunk of money – but the cable companies are virtually forced to pay it, because ESPN is a “must-have” channel and because cable providers can hide the cost inside a huge bundle of other channels.
However, as the number of bundle subscribers shrink – and the size of the bundles shrink with them – ESPN may find itself without many other channels to share a package with. And consumers will certainly be looking for ways to opt out of that $96 annual bill for a single channel.
Speaking of which…

What Does All This Mean for You?

As for consumers… some will be winners, and some will be losers – depending on what programming they watch and how glued to the gogglebox they are.
Consumers who only watch a little TV are obvious beneficiaries, as they can choose the channel or two that they want at a much lower price than what they were paying the cable company for a redundant bundle package.
However, consumers who watch a lot of TV may find that paying several streaming providers adds up to more than they were originally paying the cable company!
And, of course, the streaming services will be forming “bundles” of their own, again trying to capture the maximum amount of your money.
And ultimately, that’s one thing we can be sure of. No matter what happens, to get what you want, big companies will always find ways to separate you from as much of your cash as possible.
Research Report
analyst ratings
blogger opinions
investor sentiment
news sentiment
analyst ratings
insider activity
hedge funds
stats charts
You May Also Like