The Collapse Of Gold Prices

Many of the gold bugs cannot understand why gold prices keep falling. One would think with all the strife around the world, the financial crisis in Greece, plus the stress and conflict in the Middle East and various other countries that it would be an ideal time for gold prices to go higher. That, my friend, was the old way of thinking, that is not the way the markets really work.

Let’s take a look at what’s really happening and the three main reasons for the collapse in the price of gold.

(1) We had seen very strong equity markets around the world which gave an opportunity to investors to make money. Remember, gold pays no interest and in fact, you have to pay money to store gold. So in that sense it’s a little like holding insurance for a catastrophic event.

(2) Gold has failed to respond to any of the traditional triggers, such as financial unrest and uncertainty. What this signifies is that the perception of gold, at least for the moment, has changed. In any market, perception is perhaps one of the most important elements for dictating price direction. 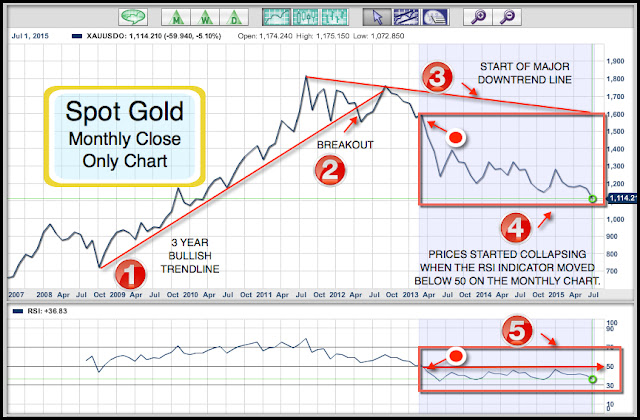 Like water, gold will find its own level whether that’s at $1,000 or $700 or lower is largely dependent on the market itself.

Technically speaking, the $1,000 level will psychologically act as support, as that was the high seen on March 14, 2008 and it also happens to be a round number and markets tend to stop both on the upside and downside at round numbers.

Only time will tell how low gold will go. In the meantime, it looks like we have a pretty exciting week ahead of us with the equity markets and what’s going on in gold.