Have you lived your entire life in the wilderness Henry David Thoreau style with no connection to the outside world?

If the answer to that question is ‘no’, then you are familiar with The Coca-Cola Co (NYSE:KO).

Coca-Cola is the global leader of the beverage industry.

The constant criticism on Coca-Cola stocks is that sodas are unhealthy and people are slowly switching away from them.

There’s a small bit of truth to that – but even if Coca-Cola only sold sodas, then it would be in about the same position as the cigarette industry. That’s not a terrible place to be. Altria, the U.S. cigarette industry leader and owner of Marlboro – has seen its stock price rise about 27% over the last 12 months, while the S&P 500 is flat over the same time period.

But the truth of the matter is that Coca-Cola is much, much more than a soda company. Coca-Cola has 20 billion dollar brands. Of these 20 brands, 14 are non-carbonated.

The growth story surrounding Coca-Cola is surprisingly simple. If people continue to drink beverages, Coca-Cola will continue to grow its earnings. That’s about as safe an investment as can be made.

Fortunately for Coca-Cola, more and more in the world are able to afford buying the company’s expensive (relative to tap water) beverages.

It is no secret that Warren Buffett has long been a fan of Coca-Cola stock. He first began purchasing the stock in 1988. Twenty-seven years later, Coca-Cola is Warren Buffett’s 2nd largest holding. The stock currently makes up 14.7% of his portfolio.

“I don’t look for 7-foot bars: I look around for 1-foot bars that I can step over”

Coca-Cola was founded in 1892. Its flagship product has changed very little sense that time. The biggest change came just 11 years after the soda was introduced; Coca-Cola removed the cocaine from its sodas in 1903. There are very few products that change as slowly as Coca-Cola, and very few industries that change as slowly as the beverage industry.

“Time is the friend of the wonderful company, the enemy of the mediocre”

Coca-Cola has grown rapidly over the last 123 years. The company now has a market cap of over $170 billion. For Coca-Cola, time truly has been its friend.

Coca-Cola stock is almost tailor made for Warren Buffett. It combines his love for a strong and durable competitive advantage with his desire for businesses that change very slowly and are easy to understand. As a bonus, Coca-Cola has a healthy 3.4% dividend yield. Click here to see Warren Buffett’s 20 highest yielding dividend stocks.

Over the last decade, Coca-Cola has compounded its earnings-per-share at 7.2% a year.

The company plans to accomplish this growth through becoming even more capital efficient. Coca-Cola is strengthening its relationships with its bottlers. The company recently announced that its European bottlers were merging into a single, larger company. This will result in cost synergies and higher margins for Coca-Cola. Coca-Cola has similar agreements in place in Africa and Indonesia as well.

This is historically a very high yield for Coca-Cola stock. The image below shows Coca-Cola’s dividend history over the last 20 years: 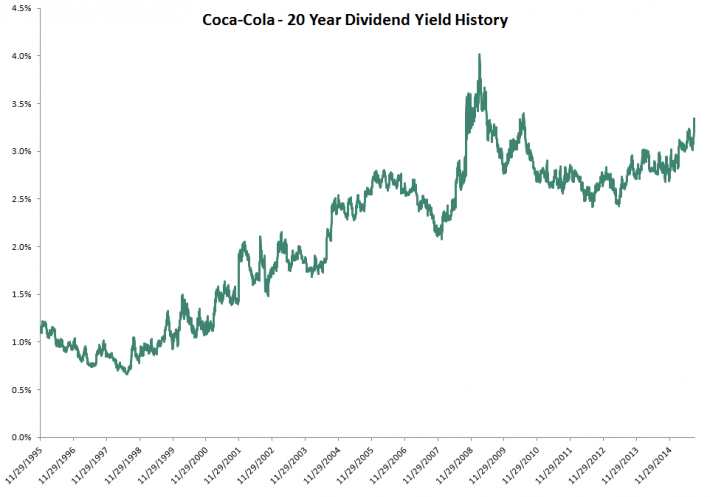 As you can see, Coca-Cola is trading for its highest dividend yields of the last 2 decades, excluding the Great Recession period of 2007 to 2009.

Simply put, now is the best time outside of the Great Recession for dividend investors to buy into Coca-Cola.

With a 3%+ dividend yield and expected earnings-per-share growth of 7% to 9% a year, investors in Coca-Cola should expect total returns of between 10% and 12% a year going forward.

Coca-Cola currently has a price-to-earnings ratio of 17.3 (using adjusted earnings, not GAAP earnings). The company appears to be trading at the low end of fair value at this time.

Note: The S&P 500’s expected total return is based on its long-term historical average. Returns could well be lower over the next several years.

In addition, Coca-Cola is of a significantly higher quality than the average S&P 500 stock. Coca-Cola possesses a strong and durable brand and scale based competitive advantage in a slow changing industry. This virtually ensures Coca-Cola will continue growing for decades to come.

Coca-Cola’s combination of safety, stability, high dividend yield, and reasonable valuation make it a favorite of The 8 Rules of Dividend Investing.