The 5 Growth Levers Facebook Inc Is Leaning On (FB)

Of the 150 US companies reporting first quarter earnings this week, few are expected to make a bigger splash than Facebook Inc (NASDAQ:FB).  Mark Zuckerberg’s social network empire is expected to continue its ascension Wednesday after the closing bell. Here are the 5 levers Facebook is leaning on which make its outrageous growth possible.

Aside from its 1.19 billion monthly active users (MAUs) on mobile, there’s another reason why Facebook is at the top of the class in mobile advertising. Facebook has a leg up on its opponents when it comes to selling mobile ads because Facebook has the most valuable data.

Advertisers can’t track visitors’ activity with cookies on mobile like they do on desktop. Facebook leverages its user provided demographic data and account activity history to put advertisers right in front of their target customers. Marketers are willing to pay up for Facebook’s superior mobile ads which resulted in $3.59 billion in revenue from advertising last quarter with 69% of that sum coming directly from mobile. In the same quarter of 2013 mobile sales accounted for 53% of ad revenue. 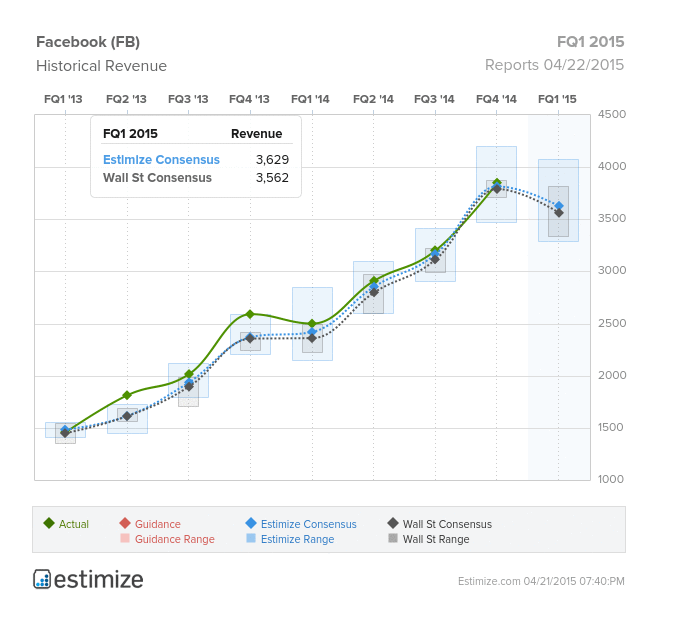 Contributing analysts on Estimize expect Facebook to report total revenue of $3.63 billion on Wednesday. Wall Street’s consensus is about 2% lower at $3.56 billion. The Estimize consensus is projecting a 45% year over year improvement to total revenue and a hefty portion of that lift is expected to come from mobile growth.

In a typical day the average Facebook user watches close to 3 videos on the social network. This adds up to 3 billion video plays per day. Try wrapping your head around that number. 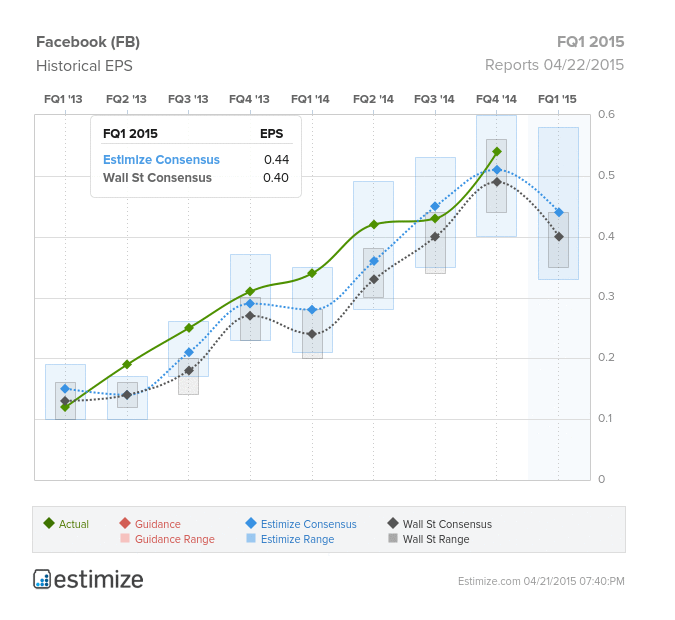 Although Facebook’s Q1 profit will likely come down sequentially from the holiday quarter, Estimize contributors still expect to see hearty results. The consensus estimate from 172 contributors is that 1st quarter earnings will rise from 34 cents per share last year to 44 cents per share. Wall Street is setting the bar significantly lower at 40 cents per share.

At least 3 more cylinders to fire on

Even after all the excitement around Facebook’s core business, there’re still 3 big reasons to be excited about this company.

Facebook’s non-core products have over a billion users between them and they are largely still un-monetized at this point. WhatsApp is the largest with 800 million monthly active users. Instagram isn’t too far behind with 460 million. At these levels of scale WhatsApp, Instagram, and Facebook Messenger each have the potential to become multi-billion dollar businesses on their own. Aside from the big 3, Facebook is also betting on its $2 billion virtual reality hardware acquisition, Oculus VR, which may play a important role in the company’s future.

To put things in perspective, Instagram and WhatsApp both have MAU counts well above Twitter’s 288 million. Facebook is also working on splitting off Messenger into a third powerhouse non-core app. Mark Zuckerberg has been clear in the past about his plan to unbundle the all-encompassing ‘big blue app’ into smaller, best in class pieces. What Facebook’s doing with Messenger now is a great example of the principle of unbundling at work.

As Facebook is yet to put serious effort into monetizing WhatsApp, don’t expect that to move the needle this quarter. But remember Facebook is keeping close to a billion users in its back pocket and letting that number flourish with a clean and accessible experience.

Facebook Messenger is probably closer to its monetization timeframe, maybe just a few quarters away. In March Facebook revealed a long awaited plan to allow mobile payments through Messenger. In the near future look for Facebook to add utility to Messenger and cement it in the middle of the mobile peer-to-peer ecosystem by allowing third party app integrations. These integrations could include games, media, and location based services to name a few possibilities.