EconMatters- May 19, 2015, 1:47 PM EDT
SHARE ON:
By Benedict Clements and Vitor Gaspar
US$5.3 trillion; 6½ percent of global GDP—that is our latest reckoning of the cost of energy subsidies in 2015. These estimates are shocking. The figure likely exceeds government health spending across the world, estimated by the World Health Organization at 6 percent of global GDP, but for the different year of 2013. They correspond to one of the largest negative externality ever estimated. They have global relevance. And that’s not all: earlier work by the IMF also shows that these subsidies have adverse effects on economic efficiency, growth, and inequality.
What are energy subsidies
We define energy subsidies as the difference between what consumers pay for energy and its “true costs,” plus a country’s normal value added or sales  tax rate. These “true costs” of energy consumption include its supply costs and the damage that energy consumption inflicts on people and the environment. These damages, in turn, come from carbon emissions and hence global warming; the health effects of air pollution; and the effects on traffic congestion, traffic accidents, and road damage. Most of these externalities are borne by local populations, with the global warming component of energy subsidies  only a fourth of the total (Chart 1). 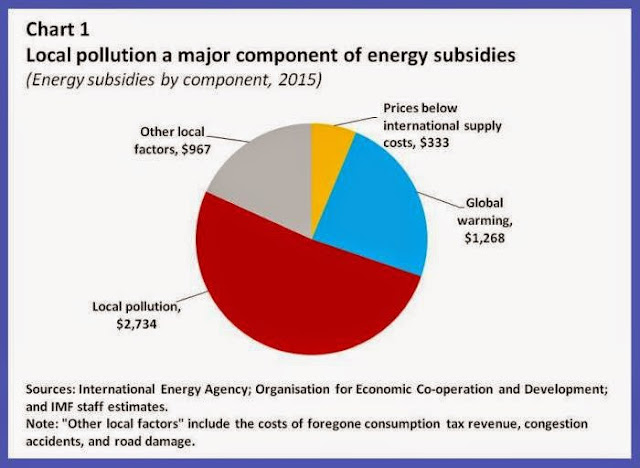 Energy subsidies are both large and widespread. They are pervasive across advanced and developing countries. Emerging Asia accounts for about half of the total, while advanced economies account for about a quarter (Chart 2). The largest subsidies, in absolute terms, are in China (US$2.3 trillion), the United States (US$699 billion), Russia (US$335 billion), India (US$277 billion), and Japan (US$157 billion). For the European Union, subsidies are also substantial (US$330 billion). 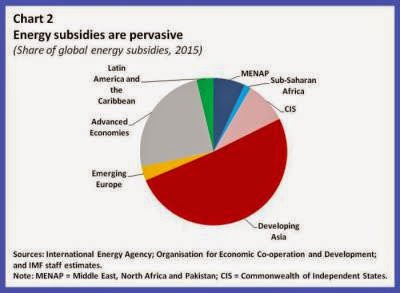 Larger than previously thought
The number for 2015 is more than double the US$2 trillion we had previously estimated for 2011.  Over half of the increase is explained by more refined country-level evidence on the damaging effects of energy consumption on air quality and health. An accompanying blog from our colleagues Sanjeev Gupta and Michael Keen explains in more detail the differences in the estimates. A technical discussion of our estimates is provided in an IMF working paper by David Coady and others.
While the large size of our new estimates may be surprising, it is important to put in perspective just how many health problems are linked to energy consumption and air quality. In China alone, the World Health Organization estimates there are over one million premature deaths per year due to outdoor air pollution, caused by the burning of polluting fuels, particularly coal, and other sources.
Many countries have made significant strides in tackling energy subsidies. More recently, several countries have narrowed the gap between domestic prices and international prices, which reduced subsidy spending by US$ 190 billion between 2011 and 2015.  Countries that have reformed subsidies include Angola, Cameroon, Cote d’Ivoire, Egypt, India, Indonesia, Jordan, Malaysia, Mauritania, Mexico, Morocco, Sudan, Thailand, Tunisia, and Yemen. As we indicated in an earlier blog (Oil Prices and Public Finances: A double-Edged Sword), lower oil prices provide a golden opportunity for countries to continue to advance energy subsidy reform.
The recent experience of India is instructive. In October 2014, diesel prices were fully liberalized, which followed a period of gradual subsidy reform.  Efforts have also been made to limit the cost of subsidies to liquid petroleum gas (LPG). This includes the expansion of a direct cash benefit scheme throughout the country, in January 2015, to replace access to subsidized LPG. This reform ensures that low income households will be protected while reducing the budgetary cost of subsidies.
Getting energy prices right
Despite reform efforts in many countries, energy prices remain woefully below levels that reflect their true costs. Does resolving this problem need to wait for a global solution?
The IMF has long argued that getting energy prices right can help national governments achieve their goals not only for the environment but also for inclusive growth and sound public finances.  Increasing energy prices gradually and predictably to reflect their true costs would generate fiscal gains of about 3½ percent of GDP. The fiscal gains are less than the total amount of subsidies (6½ percent of GDP) because higher prices would drive down energy consumption.
The fiscal gains from subsidy reform are sizeable and could be a game changer for fiscal policy in many countries.  This would give room, for example, for governments to reduce some types of taxes (such as those imposed on labor) that weigh down growth;  raise growth-enhancing public expenditure (e.g. for infrastructure, health  and education); and finance targeted cash transfers for the poor.  Furthermore, there would be appropriate incentives for investment in green technology because dirty energy would no longer be artificially cheap.
The icing on the cake is that the benefits from subsidy reform—for example, from reduced pollution—would overwhelmingly accrue to local populations.
Start the process now, at the national level
Even if motivated purely by national reasons, energy subsidy reform would have favorable effects globally. Take, for example, the case where countries raise prices purely with domestic considerations in mind, that is, without adding in a correction for global warming. This would nevertheless help reduce global C02 emissions by about 17 percent.
Conditions are ripe to decisively engage in energy taxation and energy subsidy reform, further favored by lower international oil prices and low inflation. Steps at the national level could hasten progress at the global level ahead of the Paris climate change summit in December.
The fiscal implications are mammoth: at US$5.3 trillion, energy subsidies exceed the estimated public health spending for the entire globe. It also exceeds the world’s total public investment spending. The resources freed from subsidy reform could be used to meet critical public spending needs or reduce taxes that are choking economic growth.
By acting local, and in their own best interest, policy authorities can contribute significantly to the solution of a global challenge. The path forward is thus clear: act local, solve global.
Research Report
analyst ratings
blogger opinions
investor sentiment
news sentiment
analyst ratings
insider activity
hedge funds
stats charts
You May Also Like