In an industry flooded by confusing menus and changing items, casual dining restaurants are frequently deluged by small issues. But visiting Texas Roadhouse Inc (NYSE:TXRH) simply confirmed our theory that this company sailed smoothly through the storm. Great company, atmosphere, staff, food, and — most importantly — stock.

According to a recent report by Morgan Stanley, Texas Roadhouse was the most likely restaurant to be recommended by its customers, leading others such as Chipotle Mexican Grill, Inc. (NYSE:CMG) and Red Lobster. This past Saturday afternoon, Young Money Monsters staff decided to take on our local Texas Roadhouse. Though we had visited (and enjoyed) the restaurant before, this dining experience came with a more observant eye. Upon arriving we found a fairly full restaurant and parking lot.

After moving inside we were greeted by the friendly staff and shown to a table surrounded by western decorations. Throughout our meal we were attended to by our attentive and friendly waiter in training. He even told us he had been working at Outback Steakhouse, but had already found Texas Roadhouse to be a more enjoyable work environment. This comes as no surprise as Texas Roadhouse was the only casual dining restaurant to be named one of the top 50 places to work by Glassdoor, a respected job data firm. 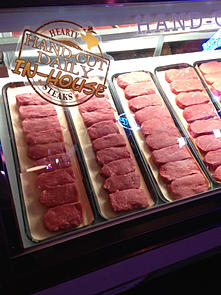 Moving on to the food end, upon sitting down we were immediately served dinner rolls (unlimited) and found a bucket of peanuts on our table. These are both staples in any Texas Roadhouse along with the hand cut steaks. We both took advantage of the “early dine” option which yielded an entree (ex: 6 oz. sirloin, pulled pork dinner) and two sides (ex: steak fries, chili, mashed potatoes). A filling, affordable, and delicious meal. The easy to read menu (unlike some competitors) can be viewed here.

Though Texas Roadhouse is expecting to open 25 to 30 new company restaurants in 2015 and opened 22 company-owned restaurants in 2014, oversaturation should not be a concern as founder and CEO Kent Taylor mentioned in a recent interview with CNBC: “We don’t want to get too close to another store because the managing partner who runs the store, we don’t want to take money out of his or her pocket.” Taylor is quite the man, shown through this promotional company video:

To the stock end, Texas Roadhouse currently trades at 29.51 earnings, significantly cheaper than other growing restaurant stocks such as Buffalo Wild Wings, Chipotle, and Noodles and Company, which trade at 36.44, 41.46, and 55.7 times trailing earnings, respectively. Even with the lower valuation Texas Roadhouse serves a nice dividend (currently yielding 1.87%), something that many competitors do not bring to the table.

The formula that provided us with a fantastic dining experience simply gets the job done for the company; in Q4 2014 comp sales increased 7% and traffic increased 5%. Fueled by tailwinds of lower gas prices and strong employment numbers, Q1 2015 (earnings for the first quarter are reported May 4) started off even stronger, as management stated in the Q4 call, “Our solid comp performance has continued into 2015 with comps up 12% through the first seven weeks of the year.” Even though analysts seem to be forecasting comp sales for the full quarter around 9%, the number remains encouraging as more and more people find their way into the restaurant.

Over the past three months the stock has oscillated between about 33.50 and 37.50 per share, its current price of 36.33 falls in the middle of this range and is where we are adding it to Our Picks. Despite strong tailwinds from the macroeconomy, the news has not all been great for Texas Roadhouse as they anticipate coping with beef price inflation of 3 to 4% this year, which should eat further into the company’s low profit margin of 5.5%.

Still, Texas Roadhouse combats rising costs (including health care) without aggressively increasing prices, “In response to some of these inflationary pressures, we completed the rollout of an average menu price increase of 1.8% in late November. While this pricing action will not be enough to completely offset inflationary pressures this year, our goal continues to be balancing short-term profit growth with protecting the long-term positioning and value of Texas Roadhouse,” said CEO Kent Taylor in the Q4 Call. Focusing on the long-term horizon while still maintaining profitability manifest managements ability to navigate through what could otherwise be tough times.

With a low valuation in respect to peers and comp sales likely to come in at high single digits or low teens, Texas Roadhouse is a company destined for success. While the meal tasted great, the investment opportunity tastes even better — it joins about 20 other companies in the market-beating Our Picks section.

Bill Gunderson: How I Am Investing In Low Priced Oil