Tekmira Pharmaceuticals (NASDAQ:TKMR) may not have found its next big biotech thing, after all.

After a crazy-good run riding the Ebola scare from obscurity to prominence in just a few months, the company found itself searching for something new to keep investors interested. Tekmira’s betting that hepatitis B will be it.

Shares of Canada-based Tekmira jumped from ~$15 to ~$24 earlier this month on news it teamed up with OnCore BioPharma to work to develop a hepatitis B therapy.

Now, on Tekmira’s recent tepid announcement of dosing one person in its tiny 20-patient clinical trial, shares jumped 2.7% – far short of the long-gone Ebola gains of 280%-plus.

Indeed, Tekmira reminds us of another Ebola treatment-next-big-biotech-thing wannabe that TheStreetSweeper warned investors about, iBio (then $1.88, now ~$0.52).

While other viewpoints about Tekmira are available here, let’s look at some issues surrounding Tekmira’s latest, greatest target.

With news reports on Ebola rampant and Tekmira promoters out in force, Tekmira shares rocketed from about $19 on March 4 to about $28 on March 6 – the day a total of 10 stock promoters reported on Tekmira.

In August, though, Tekmira’s Ebola run slowed. News emerged that the government was working with several companies on Ebola treatment, and had treated two Americans with drugs made by Mapp Biopharmaceutical rather than Tekmira’s treatment. Tekmira gave up its recent massive gains and then some.

By early last October, with doubts growing about Tekmira’s Ebola therapy, the stock dropped to about $23 to $24. A Glaucus Research report in November on troubles ranging from Tekmira’s finances to misunderstanding of its Department of Defense contract rubbed out several more bucks – plunging the price after several weeks to below $13.

It became clear that Tekmira needed to look for the next big biotech story.

Tekmira decided hepatitis B fit the bill. Tekmira and Oncore BioPharma want to eventually combine several drugs in one pill to treat chronic hepatitis B.

THE TROUBLE WITH ONCORE

OnCore was started as an afterthought in 2012, after a co-founder had alreadysold off its desirable product – a hepatitis C treatment.

OnCore bought its way into existence – in the risky rollup mode reminiscent of that employed by Revolution Lighting ($5.19 before TheStreetSweeper’s exposure, now $1.15) Here’s what OnCore did:

*September 2014, a deal to make $150 million in milestone payments, plus future royalties on any future drug sales, for NeuroVive Pharmaceutical’s hepatitis B drug candidate.

*October 2014, an undisclosed cash offer to buy Enantigen Therapeutics, the company owned by the guys down the hall, who developed the experimental hepatitis B treatment. Both OnCore and Enantigen are located in the Pennsylvania Biotechnology Center in Doylestown, Pa.

*November 2014, a filing for an initial public offering that never happened.

So the situation comes down to Tekmira buying a company after it had already sold its big idea and then paid mightily for other companies’ ideas. We don’t believe this merger target can possibly be worth $400 million.

*TIME IS NOT ON THEIR SIDE

The biotech commercialization process is slow, frequently impeded by numerous failures along the way. And Tekmira’s progress has been even more agonizingly slow than most. Since formation in 1992 , Tekmira has attempted to advance nine products.

Each must go through animal testing before Phase I to III human testing under the US Food and Drug Administration’s eyes before the company can even think about commercialization. Tekmira says the three most advanced have reached only Phase II.

The Ebola treatment that prompted frenetic investing in Tekmira a few months ago is only in Phase I.

But most products – five including another Ebola product – haven’t even made it beyond pre-clinical testing.

The recent Phase I clinical trial initiation promotion with OnCore handed Tekmira a promotional tool but did little to improve the timeframe.

Tekmira still faces years of clinical trials and even then, certainly no sure shot at bringing the treatment to market.

Considering the performance of companies lead by some Tekmira managers, we’re concerned Tekmira will not do much better.

Dr. Daniel Kisner, Tekmira’s chairman, became an Lpath director in 2012, for example. Charts below show how the biotech company net income and stock prices have fallen since then. Net losses worsened to $7 million, while the stock lost over 80 percent of its value. 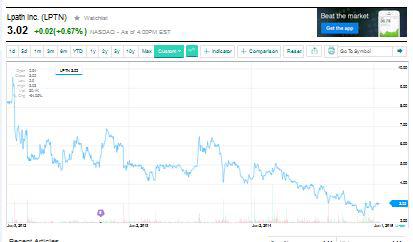 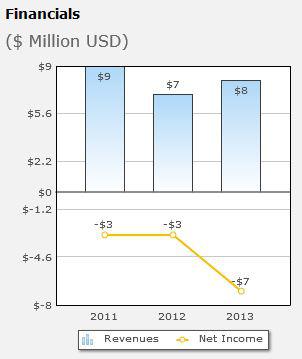 Conatus Pharmaceuticals added Dr. Kisner to its board of directors Feb. 7, 2014. As the chart below shows, CNAT fetched about $9-$12 then but has fallen to well under $6 now. Piper Jaffray recently slashed the price target from $16 to $6 and downgraded Conatus to “neutral,” saying results of its Emricasan drug trials make future development of the drug unclear. Conatus’ history of negative earnings and zero revenue continues. 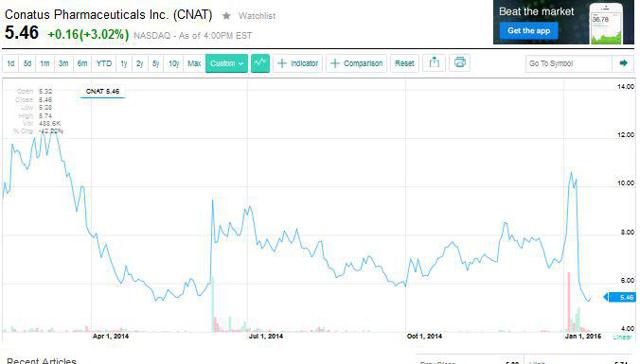 Tekmira CEO Mark Murray came on board 2008 through Tekmira’s acquisition of the company he founded in 2000, Protiva Biotherapeutics. Mr. Murray is well acquainted with the distractions of legal challenges as both a plaintiff and defendant in lawsuits alleging everything from intentional misrepresentation to fraud to allegations that Mr. Murray issued a press release that accused

Alnylam (see an excellent summary here), of “stealing” technology rather than reaching an agreement that had soured.

Before founding Protiva, Mr. Murray’s experience included ZymoGenetics, now a Bristol-Myers subsidiary, and Xcyte Therapies, acquired through reverse merger in 2006 by Cyclacel Pharmaceuticals. The chart below indicates where that company with its increasing losses now stands. 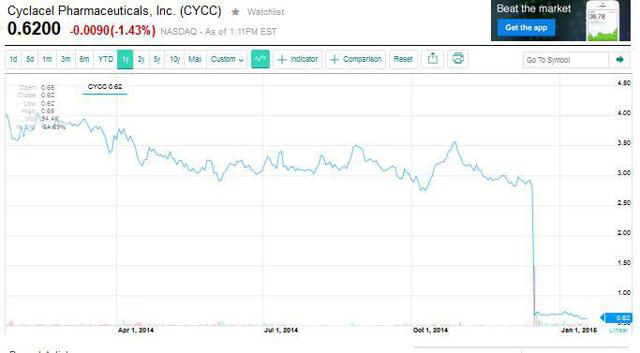 Tekmira’s new chief financial officer, Bruce Cousins, worked four years as CFO for Aspreva Pharmaceuticals until Galencia Group acquired it in 2008. But he devoted a year or less to various companies, including solar power products company Carmanah, where cranky major shareholders virtually tossed him outof his CEO position in June 2013. He rebounded by saying he’d just take off on his boat. After floating around for four months, he grabbed the job with Tekmira.

How did his former company do? Adjusted for a stock split, the stock rose from $1.17 during Mr. Cousin’s tenure to a little over $3: 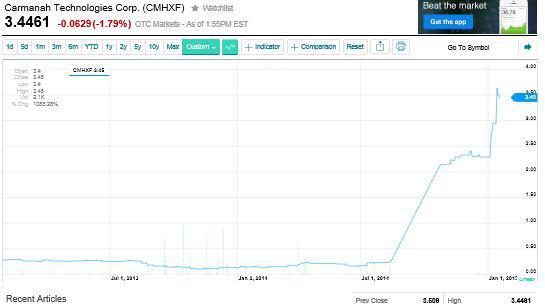 Mr. Cousins has also served as director of Alya Ventures, which merged with mobile marketing technology company Snipp Interactive in 2011. The company stock now fetches under 50 cents per share.

Today, Med BioGene, focused on cancer testing, attracts few traders willing to risk a few cents on a share, as shown by the Med BioGene chart.

So, it doesn’t look good: Tekmira’s habit of chasing its next big story, stock promotions, management’s experience with troubled companies and overvalued merger.

Considering the 50 percent Tekmira-OnCore stock arrangement, we were already asking ourselves: How could this situation possibly create a company with a nearly $1 billion valuation combined? No way. Tekmira’s search for the next big thing will never cease until shareholders run out of money.