Tech Earnings Parade Begins Next Week: Here’s What You Need To Know

This week, eight companies from the S&P 500 tech sector reported earnings for Q4, but the tech parade truly kicks off next week, when we get 22 results. Due to continual upward revisions and better-than-expected results from nine of the 15 companies that have reported thus far, IT has moved into the third spot for highest Q4 sector growth. Currently, our contributors expect the sector to grow 12.3% on the bottom line and 7.0% on the top line.

Driving growth in the tech space is the semiconductor industry, poised to increase profits by 30.1% and revenues by 14.8% year-over-year, followed by the internet software & services industry. 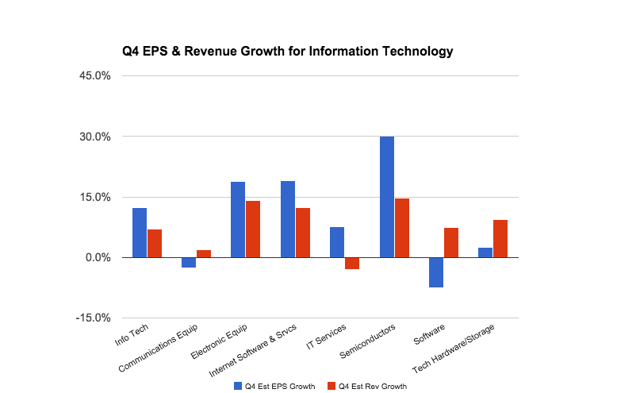 Thus far, six of the 15 companies have reported from the semiconductor space. We saw Intel (NASDAQ:INTC), KLA-Tencor (NASDAQ:KLAC) and Linear (NASDAQ:LLTC) beat the Estimize EPS consensus, Micron (NASDAQ:MU) and Xilinx (NASDAQ:XLNX) slightly miss and Altera (NASDAQ:ALTR) meet. On the top line, all six companies missed the Estimize consensus, showing a continuing trend this season of weak sales output paired with impressive bottom line results engineered by a combination of strict cost management and share buybacks. However, despite the misses, every company posted YoY growth in revenues. Next up from this segment is Texas Instruments (NASDAQ:TXN), reporting on Monday.

The next biggest winner, internet software & services, contains six companies. The industry is estimated to post EPS growth of 19.0% and revenue growth of 12.3%. Next week we get results for Facebook (NASDAQ:FB), Google (GOOG,GOOGL) and Yahoo (NASDAQ:YHOO), the heavy-hitters in the industry. The internet companies are set up for a very interesting quarter, as expectations are relatively muted for the big names relative to the past four quarters. For many of the most-watched companies, the Estimize consensus, which represents true market expectations, is in line with the Wall Street consensus, which is usually quite conservative. Over the last year, there have been large deltas between our and Wall Street consensus, as investors expected more from the internet names. This creates a huge opportunity for large post-earnings moves on good numbers, such as Netflix’s (NASDAQ:NFLX) results on Tuesday, which caused the stock to pop 18.8% in the after-market.

The weakest link among IT sectors this quarter is software, with EPS expected to be down 7.6% from the year-ago quarter. Thus far, only four of the 11 companies from the sector have reported: Adobe Systems (NASDAQ:ADBE), CA Inc. (NASDAQ:CA), Oracle (NYSE:ORCL) and Red Hat (NYSE:RHT). And while they all beat estimates, only Adobe posted year-over-year growth. The largest company by market capitalization from this industry, Microsoft (NASDAQ:MSFT), will be reporting results on Monday. Analysts are looking for $0.72 a share, which would mark a 7.7% decrease in profits from the year-ago quarter. Revenues are expected to do much better, anticipated to grow 8.5% YoY.

The names that we will be watching next week are Yahoo, Facebook, Amazon (NASDAQ:AMZN) and Google.

Yahoo: At Estimize, we are expecting EPS of $0.36 vs. the street’s expectation of $0.29. This is the biggest delta we have ever seen between the two estimates… and a surprise to the upside is justified, considering the company blew expectations out of the water last quarter. In Q3, the consensus was for $0.33, but the actual came in much higher at $0.52. Judging by the run-up in the stock price, which has increased nearly 20% since last quarter, a big beat is already baked into the markets.

Facebook: The Facebook story is completely different from Yahoo this quarter, with an Estimize EPS consensus of $0.50, in line with what Wall Street is expecting. Because of the muted expectations, if the company beats, it could have a big impact on the stock, as no one seems to be expecting it. Note, however, that Facebook has beaten the Wall Street consensus for the past six quarters and the higher Estimize consensus in five of the last six quarters. Last quarter, the social media company surpassed the street’s consensus and not the Estimize consensus, and as a result, the stock was punished in the after-market… showing that investors have come to rely on the company to put up big numbers.

Amazon: We’re projecting Amazon’s revenue growth rate will drop to 17% in Q4, down from a consistent 20%-24% over the past two years. We’re also seeing smaller earnings gains than last year, due to the usual heavy spending and reinvestment story that we’ve come to expect from Amazon. Last quarter, the company said it still had $80M of its failed Amazon Fire Phones left in its inventory. This might partially explain the expectation for profits to fall 20% YoY.

Google: Even though this company has missed the Wall Street consensus two quarters in a row, Estimize contributors aren’t cutting it a break. The Estimize consensus is calling for a $0.11 earnings beat and 20% YoY growth. Like Amazon, Google’s earnings are very hard to predict, as the company also spend a lot.