This weekend, bluebird bio Inc (NASDAQ:BLUE) and investigators presented much-awaited data for the first Sickle Cell Disease (SCD) patient treated with LentiGlobin (BB305) in the HBG-205 study. A webcast on Monday morning offered investors even more details, including longer follow-up for β-thalassemia patients 1201 and 1202 enrolled in the HBG-205 study.

Importantly, investors had the first look at the HbT87 kinetics and (short follow-up) clinical outcomes for the first patient treated with SCD. The former might typically be overlooked but is important due to the differences in treatment protocol and disease pathophysiology between β-thalassemia and SCD.

First, this first SCD treated patient (and most likely more SCD patients to follow) had their CD34+ hematopoietic stem cells (HSCs) harvested directly from the bone marrow. This leads to fewer CD34+ HSCs and an eventual lower dose of modified HSCs available for re-infusion (see below): 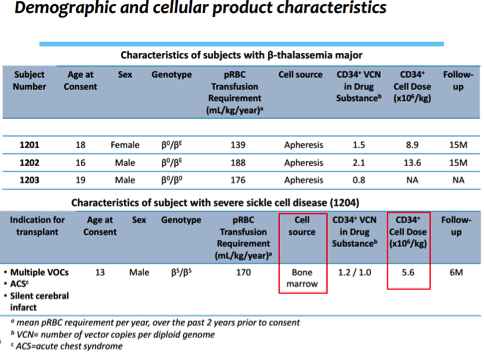 It appears that harvesting HSCs from the bone marrow provides an adequate amount of HSCs to facilitate transfusion independence and amelioration of clinical symptoms in SCD patients – at least thus far. The alternative, HSC mobilization and apheresis, is the traditional method for harvesting CD34+ HSCs. Due to the pathophysiology of SCD, in many patients HSC mobilization is impossible without significant risks. Proofing this process now is critical if bone marrow harvest is to become the go-to protocol for patients diagnosed with SCD and treated with LentiGlobin; we need to see enough CD34+ cells to provide a clinical benefit. Of course, we’ll need longer follow-up in a larger population to confirm, but for a single patient the data to date are certainly encouraging.

In addition, due to the HSC source being bone marrow, the time to neutrophil and platelet engraftment was much longer for patient 1204 (SCD) compared to patients 1201 and 1202 (β-thalassemia): 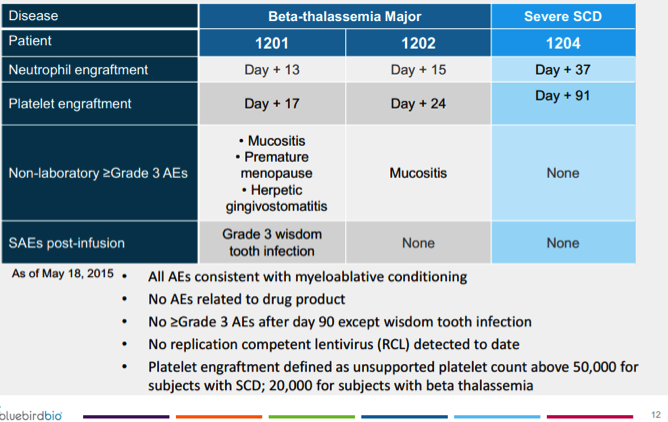 Despite these differences, patient 1204 appears to have a similar increase in HbAT87 as a percentage of total Hb over time as the two β-thalassemia patients. The comparative delay is likely a result of the longer time to engraftment. In addition, one of the main contributors to the smaller magnitude slope is the time required for transfused HbA to be ‘washed out’ (recall last transfusion at day +88): 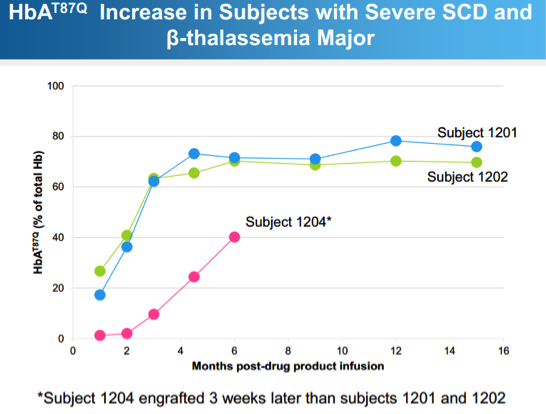 Despite these encouraging data from patient 1204, longer follow-up will be required to determine if LentiGlobin treatment is adequate to completely ameliorate SCD symptoms and keep patient 1204 transfusion independent. Patient 1204 only just recently saw most of their transfused HbA eliminated; it’s still unclear – in my opinion – if LentiGlobin on its own can produce enough anti-sickling HbAT87 to lead to the desired clinical outcome described above. The next few updates from BLUE will be critical in that regard. The maximum HbAT87 produced by patient 1204 (and subsequent treated SCD patients) may be less than β-thalassemia treated patients due to HbS (‘sickled’ Hb) contributing to the total amount of hemoglobin being produced. Due to transcriptional control, the total amount of hemoglobin produced in one patient may be capped around 13-14 Hb [g/dl] (see below left for β-thalassemia, right for SCD):

Lastly, safety continues to be adequate with all adverse events consistent with myeloablative conditioning and no adverse events related to the drug product. Peripheral blood leukocytes in treated patients continue to demonstrate highly polyclonal repopulations with no clonal dominance detected: 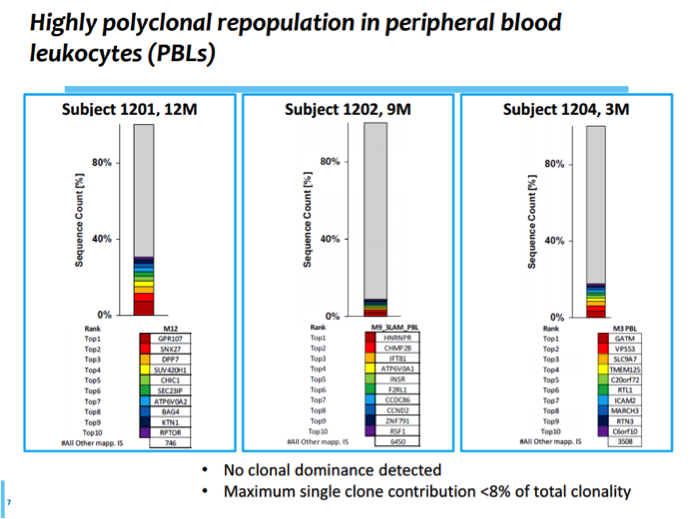 Clonal dominance could lead to the emergence of leukemia – an immense problem (and potential complication) of lentiviral (and any genome integrating) gene therapy (see Cavazzana-Calvo et al.)

As mentioned, longer follow-up is critical to understanding the true benefit of LentiGlobin in SCD patients. The primary risk following this SCD data, as I see it, is that HbA washout takes with it the apparent clinical improvements thus far: transfusion independence and no VOC events. On this topic, it’s worth pointing out that Patient 1204 had a relatively low baseline rate of events (hospitalizations due to vaso-occlusive crises) yearly – just 1-4. Based on this, 3 months of follow-up is hardly enough to draw clear conclusions.

These data are quite positive and it appears LentiGlobin may provide significant benefit for patients diagnosed with β-thalassemia or SCD; however, it’s important to stay rational in light of BLUE’s expanding valuation. We’ve built a wonderful cushion in the situation that adverse events crop up or patients “relapse”, from the suggestion last year at $37.

The American Society of Hematology’s annual meeting in December is the obvious venue for another update on studies HGB-204, -205 and most recently -206 (in which the first SCD subject has been treated).

Click Here to see the performance of analysts who rate bluebird bio.