A Sure Dividend reader recently asked me a compelling question (paraphrased below):

As most readers of my work know, I believe in long-term investing; buying great businesses and holding them for the long run. This does not involve trying to time the market.

With that said, the question above is intriguing. At its basic level, the approach above is timing the market, but, it isn’t ‘all in’ and ‘all out’. It takes a very conservative approach to ‘timing’ the market.

I designed a test to see if ‘reverse dollar cost averaging’ is a compelling strategy.

You wouldn’t sell stocks to prepare for a bear market if the market was already undervalued.  Therefore, no ‘reverse dollar cost averaging’ should be done when the market is at or below its historical price-to-earnings ratio.

I prefer to use the PE10 (also called the Shiller PE) ratio to measure the overall value of the market.

The PE10 ratio takes into account 10 years of earnings; it ‘smooths’ earnings over a longer time period to better account for 1 year aberrations.

Rule 1 of test: Only use reverse dollar cost averaging when market is trading above its historical PE10 average.

Rule 2 of test: Only use reverse dollar cost averaging when market is above its 200 day simple moving average

When the reverse happens, do the opposite. Purchase using funds tucked away from reverse dollar cost average sells.

The image below shows the PE10 of the S&P 500 and the historical average of the PE10.

What immediately jumps out is that the market has been above its historical average since around 1990. The only exception is a very brief period from November 2008 through May 2009.

If you were looking to only buy when the market was undervalued and you started investing in 1990, you’d wait a very long time before even thinking about entering the market – missing out on some of the biggest bull runs in history.

Performance was compared at different monthly dollar cost averaging rates. Liquidating 1% of your portfolio a month when the market was above its 200 day simple moving average and above its historical PE10 average is ‘1%’ in the image below.

Similarly, this test adds 1% of your liquidated cash pile back into the market when the market is below its 200 day simple moving average and below its historical PE10 ratio.

As you can see, buy and hold was the best at compounding long-term wealth over the last 20+ years.

Dollar cost averaging was computed daily. This would cause significant transaction costs (which are not included) if done in the real word. On the other hand, money invested in ‘cash’ would have earned an interest rate, which is not included in the study either.

The images below (from 2013) shows the length and duration of bull markets: 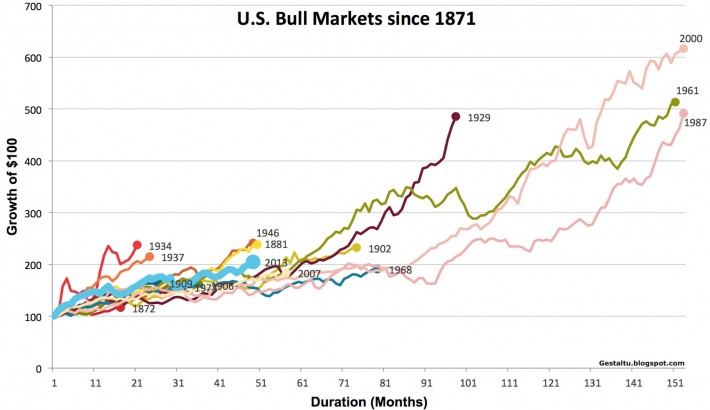 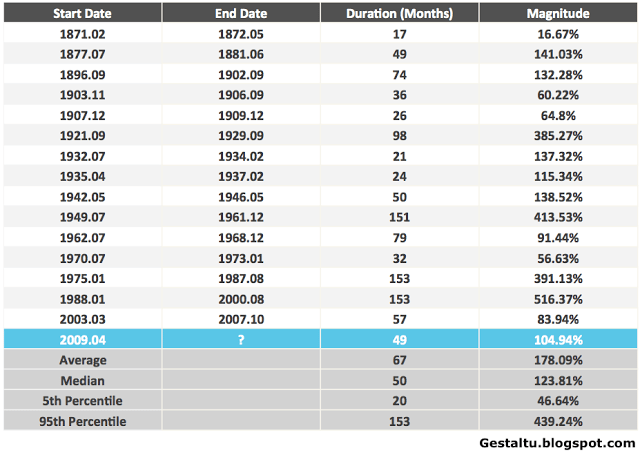 What would happen if you ‘reverse dollar cost averaged’ only after a bull market has run longer than its historical average of 5 years, 7 months,  and began the opposite operation (slowly buying) when the market entered into a recession (stopping buying only when the bear market ended)?

The image below shows when this strategy would be buying (in green), selling (in red), and holding (in gray).

Did using average bull market length make for an implementable market timing strategy?  The results are below: 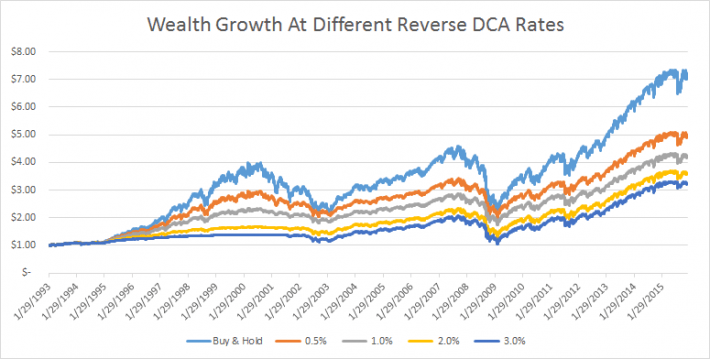 As you can see, buy and hold was still the most effective strategy at compounding long-term wealth.  With that said, using bull/bear market length rather than market valuation level has been a better market timing strategy over the last ~20 years.

Recessions are difficult to deal with. They can cause panic selling. Unfortunately no one knows when one will occur. Even experts who ‘get it right’ tend to have predicted 12 of the last 3 recessions – they call for a recession and one doesn’t occur.

That’s the problem with taking money out of the market in preparation for a recession. You may time it just right, but that’s unlikely.

If you don’t time it just right, you could potentially miss out on years or decades of favorable market growth.

Timing the market is trying to ‘get ahead’ of normal business growth. It’s like gambling; it might work out for you, but on average, the house always wins. Investing in great businesses and holding them is the exact opposite.

Buying and holding is difficult. It’s hard to hold onto your investments when the market is collapsing. It is also the best strategy (especially when considering frictional costs) of compounding wealth over long periods of time.