Is this the chart of a healthy stock market? The consensus view is either 1) yes, by definition, because charts don’t matter because the central banks will never let markets fall ever again, or 2) the market has been choppy due to a “soft patch” in the economy, which is about to start growing at 3% instead of .3%.

Nice, but this chart says distribution to me: beneath the jolly surface of new highs, the smart money is selling to greater fools who believe the consensus. 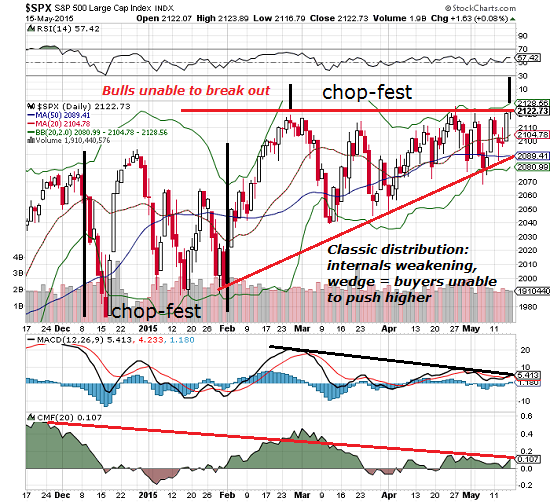 This chart is characterized by lengthy chop-fests in which wild gyrations up and down make a mockery of trends.December 2014 to January 2015 was such a chop-fest, and March to May has been another chop-fest in which Bulls have been unable to put together an uptrend of more than a few days.

The script for insiders distributing (selling) shares to greater fools hasn’t changed in decades. First, juice the market higher with some big orders, then sell into that buying until the market weakens. Reverse the downtrend with another big order, and then resume selling.

This process is even easier in the current era of high-frequency trading and machines executing most of the trades. A few big buy orders is all that’s needed to trigger more buy orders from the trading bots, which are essentially trend-followers, and the smart money can sell into that automated buying.

Despite the occasional new closing high that’s notched to assure the greater fools who have been buying, the market has gone nowhere for months. Beneath the surface, many market internals have been weakening for months–for example, MACD and Chaiken Money Flow.

Those selling into strength can always cherry-pick some market internal that supports the Bull case–if you were selling, wouldn’t you encourage buyers to take the shares you’re dumping off your hands?

Wedges usually break big up or down The current wedge has been formed by the Bulls inability to break out decisively into a new uptrend and the distributors managing to limit any declines lest the herd of greater fools get spooked by the deteriorating fundamentals of stagnating profits, sales, etc. or the painfully obvious blow-off tops forming in global markets.

If fundamentals like profits and sales no longer matter, then all that’s left is faith that central banks will never let stock markets fall ever again. Never, ever; that is of course the language of fairy tales.
Research Report
analyst ratings
blogger opinions
investor sentiment
news sentiment
analyst ratings
insider activity
hedge funds
stats charts
You May Also Like