Due to the crash in oil and gas prices over the past two years, investing in Master Limited Partnerships—or MLPs—can be very risky.

Many MLPs have slashed their distributions, or eliminated them entirely, to preserve cash flow. There has also been a rise in MLPs going bankrupt throughout 2016.

That being said, Genesis Energy, L.P. (NYSE:GEL) is a notable exception. It has been spared from the carnage in the MLP space this year.

Genesis has increased its dividend for the past 13 consecutive years. This makes it a Dividend Achiever, a group of companies with at least 10 consecutive annual dividend increases.

You can see the entire list of all 273 Dividend Achievers here.

Even better is that Genesis has actually raised its distribution for 45 quarters in a row, including a recent 10% increase. 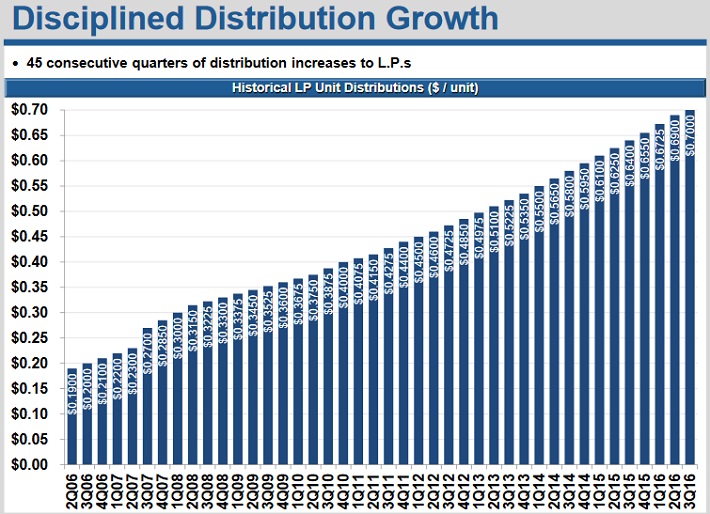 This article will explain what makes Genesis such a rare find among the battered and bruised MLPs.

Many of the MLPs that have cut their distributions in the past year are upstream MLPs. These are companies involved in exploration and production of oil and gas. Upstream companies are the most highly sensitive to fluctuations in commodity prices.

The critical difference between Genesis and the MLPs that have had to cut or eliminate their distributions is that Genesis operates mostly in midstream activities.

Instead of being a producer, Genesis stores and transports oil and gas to and from refineries. It also conducts services inside refineries like sulfur removal. 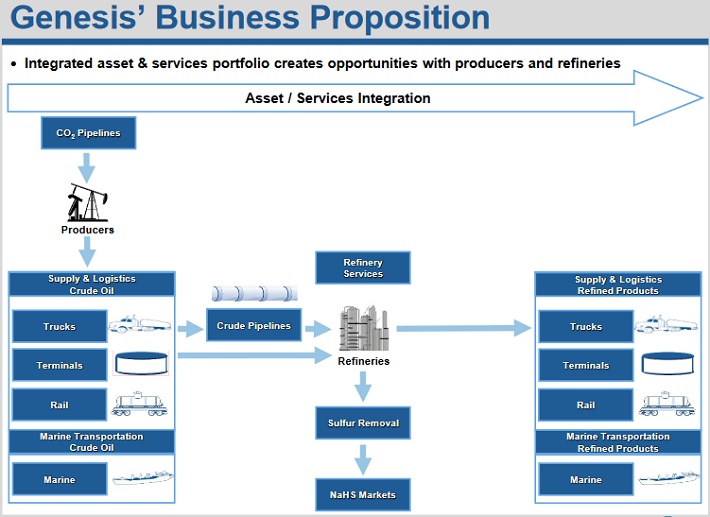 This means its cash flow is based much more so on volumes, rather than on the price of the commodity.

Genesis does suffer somewhat from falling oil and gas prices, but not nearly to the extent as upstream MLPs.

In all, Genesis has storage capacity for more than 3 million barrels of oil.

Going forward, Genesis’ biggest growth catalyst is new projects. One area that is expected to see strong growth is the Gulf of Mexico. The Gulf is one of the premier oil-producing regions in the U.S., which generates more than 1 million barrels of oil per day in total.

As a result, the Gulf is a key target for many major oil and gas exploration and production companies. In order to move that oil, they will need pipelines and transportation services.

That’s where Genesis comes in.

It is expecting several of its customers to ramp up production in the Gulf in the near-term and over the long-term. 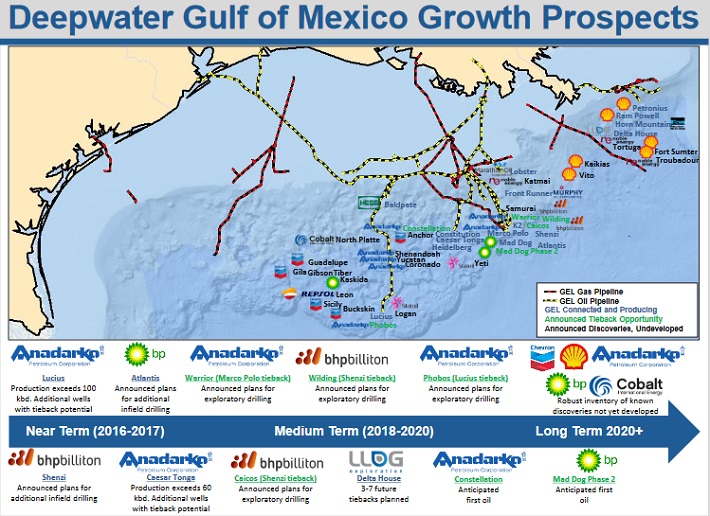 In the near-term, Genesis plans to allocate $65 million to expansion projects in the fourth quarter. Moving forward, the company expects to allocate 42% of its capital spending to supply and logistics, 39% to onshore pipelines, and 19% to marine transportation.

These growth investments should help increase future cash flow, and by extension, distributions.

Genesis’ success in raising its distribution for so long has a lot to do with its competitive advantages.

Many midstream MLPs rely heavily on take-or-pay contracts. Under this arrangement, the company either takes the product from the supplier or pays a penalty.

Genesis has a different strategy. Only 5% of its quarterly cash flow comes from minimum volume or take-or-pay agreements. This means that it doesn’t need these types of guarantees, and indicates that its services are in high demand.

Next, Genesis Energy has no general partner incentive distribution rights. This means all of its growth will flow directly through to unitholders. This helps Genesis maintain its distribution growth each quarter.

MLPs are more complicated to value than traditional stocks. Because of several items that affect MLPs like depreciation, MLPs should not be valued with earnings-per-share. It is more common to use EBITDA or distributable cash flow as valuation metrics.

For example, in 2015 Genesis generated $566.9 million of adjusted EBITDA. The stock currently has an enterprise value of $7.1 billion, which includes its market cap plus net debt.

On this basis, the stock trades for an enterprise-value-to-EBITDA ratio of 12.5; this can be used as a proxy for the traditional price-to-earnings ratio.

In a steep downturn for the oil and gas industry, single-digit multiples are not uncommon. Genesis receives a premium to its peer group, which is well-deserved because of its high-quality business.

That being said, sentiment surrounding MLPs is still weak broadly speaking. And, since interest rates are about to increase, Genesis’ valuation multiple seems fair.

As a result, investors may not be able to count on expansion of the valuation premium to boost future returns. Still, investors can earn satisfactory returns going forward.

A major piece of future expected returns will be the distribution, in addition to earnings growth. A reasonable breakdown of future returns could be as follows:

Under this scenario, investors would earn approximately 11%-13% compound annual returns.

Genesis is in sound financial position at this time. Over the last 12 months, it maintained a 4.95x debt-to-EBITDA ratio. Rising interest rates are a concern that investors should closely monitor.

The good news is that the company is likely to generate growth. This will help sustain its distribution. Last quarter, the company generated a 1.15x distribution coverage ratio.