So You Think Your Retirement Plan Is Right?

EconMatters- May 28, 2015, 6:52 AM EDT
SHARE ON:
During strongly trending bull markets, investors tend to forget that devastating events happen. Major events such as the “Crash of 1929,” “The Great Depression,” the “1974 Bear Market,” the “Crash of ’87”, Long-Term Capital Managment, the “Dot.com” bust, the“Financial Crisis,” etc. These events are often written off as “once in a generation” or “1-in-100-year events,” however, it is worth noting these financial shocks have come along much more often than suggested. Importantly, all of these events had a significant negative impact to individual’s “plan for retirement.”
I bring this up because I received several emails as of late questioning me about current levels of savings and investments and whether there would be enough to make it through retirement. In almost situation, there are significant flaws in the analysis due primarily to the use of “online financial planning” tools which are fraught with wrong assumptions. I wanted to go through some very basic concepts that you need to consider when planning for your retirement whether it is in 5 years or 25 years and more importantly dispel a few myths.

The Market Does Not Return X% Per Year

One of the biggest mistakes that people make is assuming markets will grow at a consistent rate over the given time frame to retirement. There is a massive difference between compounded returns and real returns as shown. The assumption is that an investment is made in 1965 at the age of 20. In 2000, the individual is now 55 and just 10 years from retirement. The S&P index is actual through 2014 and projected through age 100 using historical volatility and market cycles as a precedent for future returns. 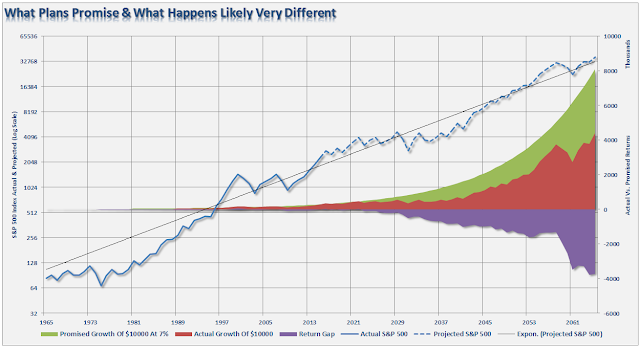 While the historical AVERAGE return is 7% for both series, the shortfall between“compounded” returns and “actual” returns is significant. That shortfall is compounded further when you begin to add in the impact of fees, taxes and inflation over the given time frame.
The single biggest mistake made in financial planning is NOT to include variable rates of return in your planning process.
Furthermore, choosing rates of return for planning purposes that are outside historical norms is a critical mistake. Stocks tend to grow roughly at the rate of GDP plus dividends. Into today’s world GDP is expected grow at roughly 2% in the future with dividends around 2% currently. The difference between 8% returns and 4% is quite substantial. Also, to achieve 8% in a 4% return environment, you must increase your return over the market by 100%. The level of “risk” that must be taken on to outperform the markets by such a degree is enormous. While markets can have years of significant outperformance, it only takes one devastating year of losses to wipe out years of accumulation.
Plan for realistic returns in the future as well as adjust and account for market swings that will impact the ending value of your money.

Most Likely You Aren’t Saving Enough

Here are some shocking statistics for you. The average salary in America is about $53,000 a year as per the US Census Bureau. A critical mistake that many individuals make is assuming that salaries will grow at some specific annual rate until you retire. As shown in the chart below, this is not necessarily a realistic assumption. 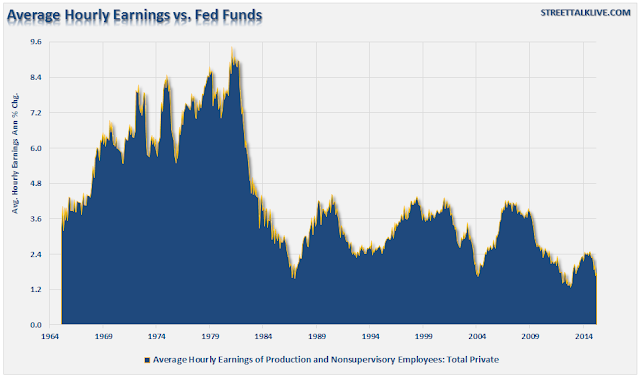 The other statistic that goes along with this is that the average American has ONLY about ONE year of salary saved up for retirement. The point to be made is that very few individuals have saved adequately enough to actual retire and live off the income their portfolio will generate.
However, for those that “THINK” they have adequate savings, they most likely need to rethink their plan. Given the highly indebted levels of the global economy today, it is impossible for interest rates to rise significantly in the future due to the impact of debt servicing requirements. This means that the old “4% rule of thumb” as a withdrawal rate likely needs to be tucked away in the history books. This also means that most individuals are not just undersaved for retirement, but grossly so. Example:
Mr. Smith needs $60,000 pre-tax to live on in retirement. At 4% interest rates he needs $1.5 million saved up. However, at 2%, that requirement jumps to $3 million.
In reality, most Americans are woefully underprepared for retirement and are hoping that Social Security or their pension will provide the social safety net they need to make it through. There is a real probability in the coming years that the massive underfunded status of these programs will lead to less than expected results for retirees.

Retirement Is More Costly Than You Think

Most people that I see are running around with the idea that they can retire on 70% of their current income. In reality, this will leave you far short of the retirement dream that you are hoping for. In a recent survey of 5000 retirees, the average difference between pre and post-retirement incomes was about 12%. The reason is that while your house may be paid off and your children gone at retirement – individuals tend to substitute other items that eat into the retirement budget such as picking up an expensive hobby like golf, traveling more, or spoiling grandchildren. However, the biggest bite out of retirement savings will come from the result of surging medical expenses and higher healthcare insurance costs.
To be safe, you should be planning on 100% of your current income stream for retirement. If you aren’t – you could find yourself coming up short, and you don’t want to find that out once you are already IN retirement.

Rules Of The Road

You cannot INVEST your way to your retirement goal. As the last decade should have taught you by now, the stock market is not a “get wealthy for retirement” scheme. You cannot continue to under save for your retirement hoping the stock market will make up the difference. This is the same trap that pension funds all across this country have fallen into and are now paying the price for.
Chasing an arbitrary index that is 100% invested in the equity market requires you to take on far more risk that you most likely want. Two massive bear markets over the last decade have left many individuals further away from retirement than they ever imagined. Furthermore, all investors lost something far more valuable than money – the TIME that was needed to prepare properly for retirement.
Investing for retirement, no matter what age you are, should be done conservatively and cautiously with the goal of outpacing inflation over time. This doesn’t mean that you should never invest in the stock market, it just means that your portfolio should be constructed to deliver a rate of return sufficient to meet your long-term goals with as little risk as possible.
Most likely what ever retirement planning you have done, is wrong. Change your assumptions, ask questions and plan for the worst. There is no one more concerned about YOUR money than you and if you don’t take an active interest in your money – why should anyone else?
Research Report
analyst ratings
blogger opinions
investor sentiment
news sentiment
analyst ratings
insider activity
hedge funds
stats charts
You May Also Like