Where Does Snap Inc (SNAP) Stock Go From Here?

Snap Inc (NYSE:SNAP) just turned in its first ever quarterly earnings report card for Q1 2017, since its IPO.  For Snap the company, the IPO was a “rite of passage” into the public capital market which has quickly delivered a humbling experience to their shareholders.  Despite nearly tripling its revenue from one year ago, Snap’ stock tumbled over 20% the day after the announcement, citing mainly the slowdown in the daily active user (DAU) growth — the lifeblood of social media companies.  With much of the company’s fundamental information being publicly available, the Q1 report also serves a rude awaking to the market.  There have been calls to reexamine the controversial valuation of the 10 times oversubscribed IPO.  In this article, I will estimate the 12-month SNAP target price from three different perspectives.

SNAP’s valuation could be analysts’ worst nightmare.  You can hardly find any positive numbers in the income statement to do meaningful calculations with.  Without foreseeable profit, free cash flow or dividends, most of the conventional fundamental valuation models do not apply.   The effectiveness of the balance sheet approach, or the book value based valuation, is also limited by the $400 million intangible assets and over $1 billion cash from IPO out of the total assets of $1.72 billion.  That is, there is no real assets to be valued.

What Are Snap Shareholders Looking At?

Therefore, before doing a proper valuation, we need to first ask what Snap shareholders are looking at now. In the only quarterly report, Snap barely missed Q1 revenue, DAU, and the earnings; met the ARPU. As it is fully expected that an IPO company will not see profit soon, the near miss of revenue was reacted harshly because the miss is related to the slowdown in DAU.  Therefore, it is safe to assume that Snap shareholders are more concerned with the long-term growth prospect in revenue.  In the social media industry, revenue is jointly determined by the ARPU and DAU.  For example, a 5% growth in DAU coupled with an 8% growth in ARPU would result in a 13% growth in revenue.

So for the SNAP’s valuation, I choose a framework which focuses on future revenue growth.   The revenue-based, Sales Franchise Value Model (“SFV”) is presented below:

The logic behind the SFV is that the stock price increases can be driven by the future growth in revenue and improvement in profitability.   Based on Equation (1), the key factor to determine fair value is the annual revenue growth rate for the current year, 2017.  For the target price, the relevant revenue growth rate is for the next year, 2018.   To estimate the future revenue growth, simple math requires to estimate both the growth in DAU and ARPU for each time period.

For the baseline case, the actual growth rate for the quarterly average daily active users for the past 4 tailing quarters is computed (Figure 2) with the Q1 growth rate around 7.64%.  To my surprise, Snap’s DAU growth has already been showing signs of declines into single digits since late 2016.  The decline has been attributed to Instagram’s launch of a similar “Stories” product.  However, the real concern is that Delmondo has shown the decreasing DAU growth even before the Instagram’s Stories launch.  Similarly, SNAP displays the same disturbing trend in ARPU, an important measure for its ability to monetize the users.  This could be also caused by the steep competition from Instagram’s fight for users.

More importantly, the level of competition quickly rises to a different order as soon as Snap joins the fight with Facebook and Google for advertising dollars.  Historically, SNAP has been a significant underperformer in ARPU compared to peers, as the peers regularly produce ARPUs somewhere between $5 and $8.  While briefly hitting $1.05 in Q4 2016, SNAP’s Q1 ARPU went back down to $0.90.  This is the basis for the next 12-month ARPU estimates which are more likely between $0.90 and $1.00.

Alternatively, SNAP’s valuation may be examined by a peer analysis at a common yet “appropriate” time point, as it is not sensible to compare the 3-month old SNAP to a 5-year Facebook, a 6-Year LinkedIn, or even a 3-year Twitter at the current time.  In Figure 1, the valuation for the four stocks are “lined up” relative to its respective IPO time.  Clearly, SNAP has been in a different “camp” than Facebook, Twitter and LinkedIn.  Snap’s price to sales ratios have been ranging between 40 and 50, while the other three stocks were between 10 and 20.  SNAP is traded twice as expensive as the peer at the same time after the IPOs.

The disparity seems even more alarming, considering that on virtually every fundamental front, the peers have been better than where SNAP is now.  Three months after IPOs, Facebook, LinkedIn, and Twitter all had a higher DAU and ARPU than SNAP; all three companies were already or near profitable.  So, it stands to reason that, at a minimum, SNAP’s price to sales ratio should be cut in half to a level closer to the peer’s.  Coupled with the Street‘s estimate that SNAP’s 2018 revenue will double, then SNAP’s 2018 price target should stay the same at around the current $20.

In addition to the historical peer analysis, another obvious comparison can be made between SNAP and its current arch enemy, Instagram.  A simple examination will easily reveal the relative valuation between the two close competitors. Statista has estimated that Instagram’s revenue will grow from $1.095 billion to $9.511 billion from 2015 to 2021 (Table 2).  Even with Instagram’s wide range of private valuation between $25 billion to $50 billion, it would be equivalent to an effective price to sales ratio between xx to xx, a much more reasonable and similar order with the other big three.  This is yet another piece of evidence suggesting that SNAP’s price target should not be significantly higher than the current level. 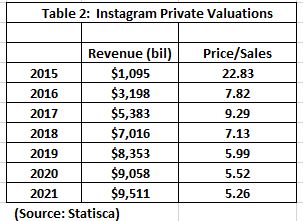 What Challenges the Assertions?

As usual, even the best quantitative metrics may not include all qualitative and risk considerations.  In above valuations, the pricing of the following factors has not been included:

It appears that the co-founders Evan Spiegel at 26 and Bobby Murphy at 28 have not yet had time to build a strong following like Tesla’s (NASDAQ: TSLA) Elon Musk.   After 7 years, Musk has built a group of loyal and cult-like shareholders, so TSLA may routinely trades 10-20% above its fair values.  SNAP does not get to receive “Elon Musk Premium” yet!

But to protect “founders’ visions,” the 230 million shares sold in the IPO have no voting rights.   With over 88% of the voting rights, Spiegel and Murphy practically have complete control of the company.

One clever move is, that Snap has instituted the dual class share structure at day 1 (IPO). Because Snap is still on its honeymoon with the shareholders, they would give the founders the full benefit of doubt.

In contrast, with almost 10 years in public eyes, it did cost Under Armour (NYSE: UAA) CEO Kevin Frank 10-15% to establish the same dual-class share structure in 2016.  Currently, Facebook’s Mark Zuckerberg is still in court to fight for his.

Though, one thing is real.  There is an inevitable negative impact from the lock-up expiration on the near horizon.  It is estimated that close to one quarter of the 1.18 billion shares outstanding may be freed up from lock-up option by the end of year, and some shares may be sold in late August.  Close to 100 million out of the 230 million IPO shares are held by executives and VC firms which are known to ”jump ship” as early as they can.  Academic study has shown that there will be a negative market impact in the order of –5% two months leading into the expiration of the lock-up option.  For the immediate same-day selloff effect, it is estimated that the selling of 100 million shares, equivalent to 3 days of the average daily volume, may amount to a negative price impact of 5-8%.

Finally, it was disclosed (in S1 filing) that SNAP has to settle a $158 million lawsuit with Reggie Brown for allegedly stealing the SNAP idea from him.  Does this sound familiar?  In just a few days ago, a former employee, Anthony Pompliano has filed a class action lawsuit against SNAP for “inflating the user metrics prior to the IPO.”  In a CNBC interview, in response to the steep competition from Instagram’s Stories, SNAP CEO Spiegel said, “Have to enjoy when people are copying your products.”

So, Evan Spiegel and Bobby Murphy are no Lisa Su and Jensen Huang.