Snap Inc (SNAP): How A Perfect IPO Scam Gets Derailed

The third day was not the charm. Not for Snap Inc (NYSE:SNAP), the company that owns the Snapchat app. An investor revolt, spearheaded by the Council of Institutional Investors, against Snap’s non-voting class A shares is now deflating a big part of the hype around its IPO.

The hype worked like this: The market capitalization of Snap would be pushed so high that major indices, including the S&P 500 index and the MSCI USA Index, would include the stock. The idea was for index and pension funds tracking these indices to all have to buy the shares, which would subsequently drive up the share price even further.

That was the bet. However, now news of the revolt is spreading.

Snap’s class A Shares plunged 12.3% to $23.77 at the close on Monday. Down 16% from their high in the morning. Shares now trade below the price at which they opened on March 2nd during their first moments in the public market.

This is what Snap’s first three days in the public market look like, and it has made a big dent in the glory of what was hailed as the hottest technology IPO in three years: 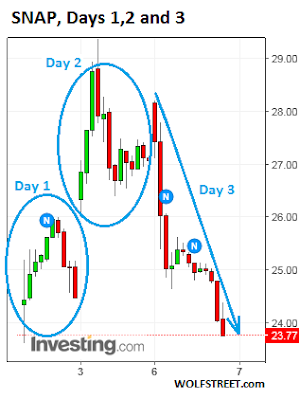 Investors that made money so far on these Class A shares are the institutions that had bought them the day before at the IPO price of $17. But for the rest of the public, these class A shares haven’t been a picnic.

Much of the hype had been focused on the stock being included in the S&P 500 Index and the MSCI USA Index, given its IPO valuation of $24 billion, and its market capitalization on Friday of about $30 billion. By comparison, Ford’s market cap is $50 billion.

The bet was that once the shares would be in the index, the real buying would commence with funds that track those indices therefore seeing incentive to buy the shares. Given the relatively small number of shares traded, this buying pressure across the globe would push up the price even further. It was simply a matter of creating a lot of artificial demand. Meanwhile, investors were front-running that propitious moment.

But suddenly, there is doubt. Reuters reported:

These are the three classes of Snap shares, but only Class A shares were sold to the public:

The structure leaves the two co-founders in total control. Class A shareholders have no say whatsoever on the company’s strategy, the pay of its executives, the board of directors, and whatever else the owners of a company would want to have a say over.

What Class A shareholders would get for their money, in addition to the financial toxicity of the deal, is the hope and hype of the stock’s inclusion in the indexes.

But now both index providers, from the S&P Dow Jones Indices to the MSCI USA Index have said that they’re reviewing Snap’s inclusion.

“What we would like to see at the least is for the indexes to exclude new no-vote companies,” Amy Borrus, deputy director of the Council of Institutional Investors, told Reuters. The Council represents pension funds and other large asset managers. Meetings with both index providers are scheduled this week, she said.

David Blitzer, managing director of S&P Dow Jones Indices and chair of a committee overseeing its indexes, said they would not add a new stock like Snap for 6 to 12 months after its IPO in any case, and will use the time to study Snap’s structure.

While the index provider does not have a hard requirement about a company’s voting structure, the committee needs to think through how much influence investors should have, Blitzer said in an interview on Monday.
“‘Who Votes?’ is the issue right now,” he said.

To be included in the S&P 500, Blitzer said, the company normally needs a market capitalization of around $5.5 billion and four profitable quarters in a row. That latter condition all but eliminates Snap’s chances of making it into the S&P 500 index in the foreseeable future.

On March 2, MSCI said that Snap would qualify for inclusion in its MSCI USA Index. But on Friday after the markets had closed, MSCI changed its mind and announced:

Following additional analysis, the IPO of SNAP (US) did not meet all of the relevant market capitalization requirements required for early inclusion into the MSCI USA Index.

Therefore, and in accordance with the MSCI Global Investable Market Indexes methodology, SNAP (US)’s inclusion into the MSCI USA Index will be re-assessed as part of the next Semi-Annual Index Review, which occurs in May 2017.

MSCI “seeks feedback from the investment community” on whether or not companies without voting rights should be included in its indices.

What’s left for Snap after the index-hype has deflated? Plenty of other hype. Even withstanding the pop of the bubble, these challenges might still blow over- because hype continues in plentiful supply within the wondrous scope of the stock market.