By The Financial Canadian

Over the coming years, the senior housing industry is expected to grow immensely as millions of baby boomers reach retirement.

Savvy investors are likely wondering how they can profit from this trend. Senior Housing Properties Trust (NASDAQ:SNH) allows investors to take advantage of this opportunity.

As a publicly-traded REIT focused on providing housing, nursing homes, and medical office buildings for senior citizens, SNH is well-poised to profit from the growing senior population. The company also has a high distribution yield of 8.0% that will appeal to income-focused investors.

This post will analyze the investment prospects of SNH in detail:

SNH was privately incorporated in 1986 before launching as a publicly-traded REIT in 1999.

With 18 years of public operating history behind them, SNH has now grown to a market capitalization of $4.61 billion, an investment portfolio of $8.5 billion (composed of 431 properties), and a tenant base of ~660. 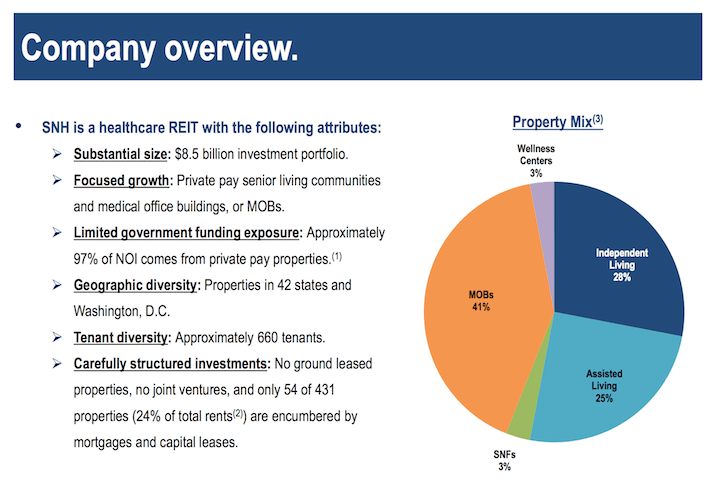 Their investment portfolio exhibits significant geographic diversification, with a presence in 42 states along with Washington, D.C. No single state composes more than 14% of the real estate portfolio. 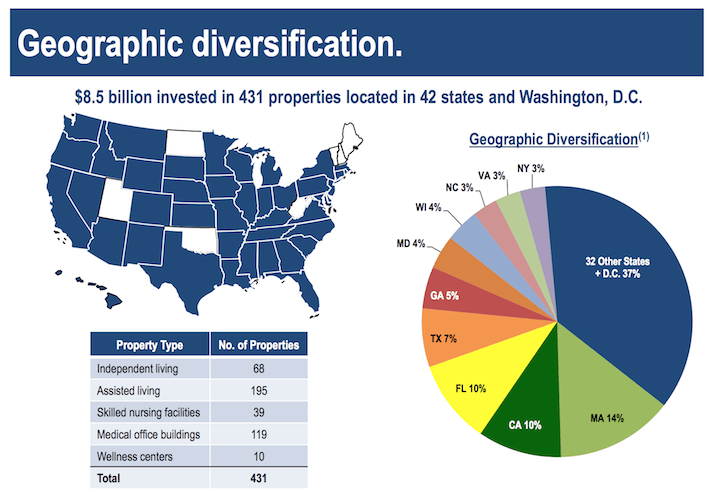 Compared to the other major healthcare REITs, SNH’s portfolio has slightly different characteristics.

Namely, their portfolio has the highest concentration among the ‘Big Four’ in two categories: MOBs/Life Sciences and Triple Net (or NNN) Senior Housing. 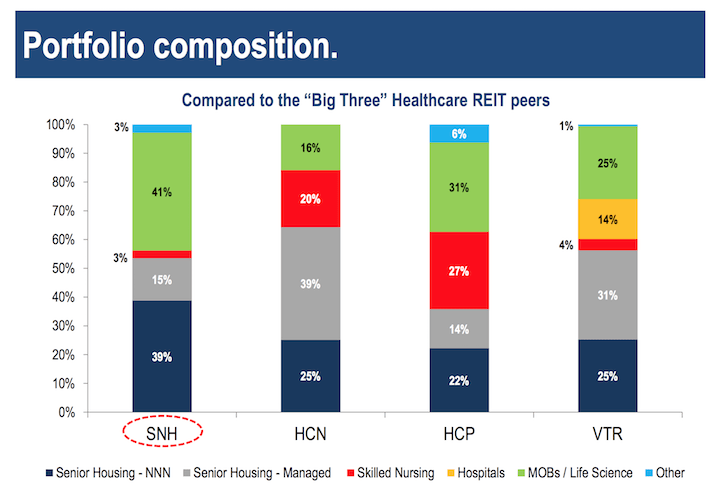 Each of these overweight components in the company’s portfolio can be viewed as beneficial from an investment standpoint.

The MOBs/Life Sciences segment provides diversification in SNH’s tenant base.

While some investors have expressed concerns that this segment is outside of SNH’s circle of competence, occupancy in this segment remains high at 95.9% and the average lease term (weighted by rental income) is 7.5 years. So execution is strong, and the diversification provides some downside protection.

The other major overweight for SNH is triple net senior housing.

Triple net leases are such that the tenant agrees to pay for the three major fees (or ‘nets’) that are not typically included in commercial lease agreements – property taxes, insurance, and maintenance. This segment reduces the overall fees paid by the REIT, which is a positive from an investment standpoint.

As a REIT focused on providing housing for senior citizens, SNH is poised to benefit from some very positive industry dynamics in the near future.

The oldest demographic in the U.S. (85+ years of age) is expected to grow at a much higher pace than the overall population. For a provider of senior living, this will naturally create more customers.

Looking at the left portion of the following diagram, SNH has forecasted growth in this age bracket to increase rapidly and maintain robust growth rates for the coming decades. 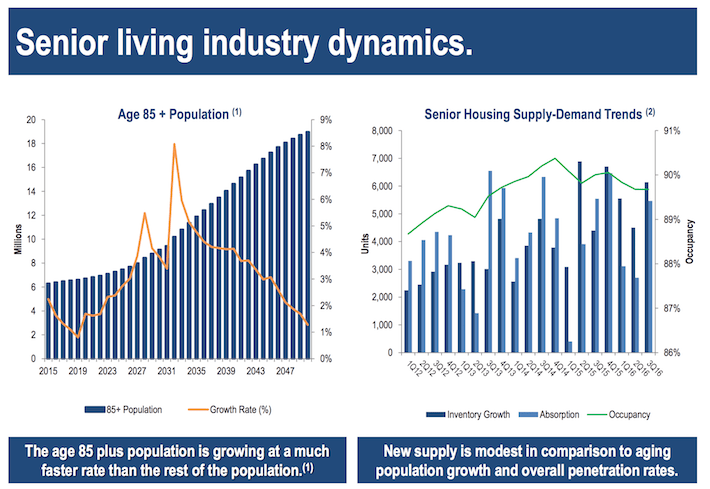 The wider age bracket of 65+ is also increasing more rapidly than the overall population. By 2030, it is expected that this demographic will compose 19.7% of the total U.S. population.

National health expenditures are increasing accordingly, and are predicted to continue to do so over the coming years.

These industry dynamics are all positives for SNH, but mean very little unless the company is executing on a strategy to take advantage of them.

The following slide outlines SNH’s business plan. They remained focused on their MOB and senior living segments, and have identified FFO growth, debt repayment, and the optimization of weighted average cost of capital (WACC) as other triggers of growth. 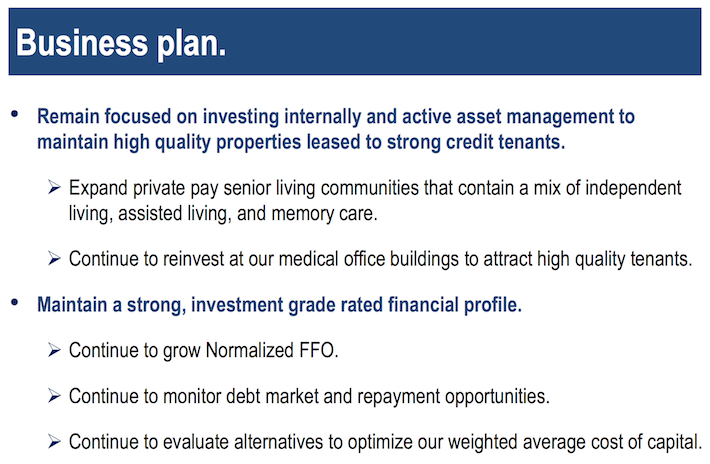 All things considered, I do not expect SNH’s business to grow at a rapid rate.

This is not due to poor management or poor execution, but rather because the company pays out most of its income as distributions. REITs are required by law to pay 90% of earnings (not FFO) as dividends.

This leaves very little margin for error when business setbacks occur (which eventually happens for every company). When earnings fall, REITs often reduce dividends as well.

This is something for SNH investors to be aware of. 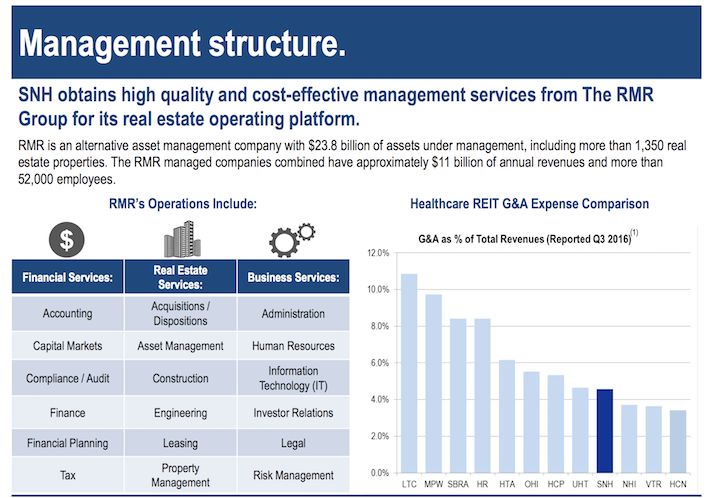 While many investors have complained about the complexity of this arrangement, it has resulted in some of the lowest G&A expenses in the industry – which can only be seen as a positive.

Looking at recession performance, it is well-known that the real estate sector has not traditionally performed well during periods of economic decline.

The company is attempting to create a conservative financial profile in the event of a market downturn. There are two ways they are doing this.

First of all, they are focusing on maintaining reasonable debt levels. As the following diagram depicts, SNH’s debt as a percent of gross assets (a measure of financial leverage) is in-line with the relevant benchmark (the SNL US REIT Healthcare Index). 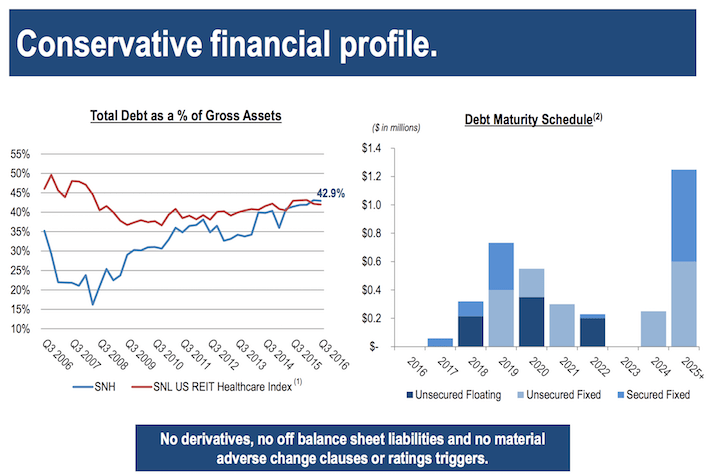 The company will also benefit from a laddered debt maturity profile. Only a small proportion of debt is due in any given year and a significant amount is due in the very long term (25+ years).

While I don’t expect the company to perform better than the general healthcare REIT industry during a recession, it does not stand out as being exceedingly risky, either. The company also stands to benefit from low expenses due to their arrangement with The RMR Group.

Make no mistake – this company is not a high-growth stock. Distributions will be a significant portion of SNH’s total returns.

For an example of this, consider the difference between the company’s long-term total returns and price returns. 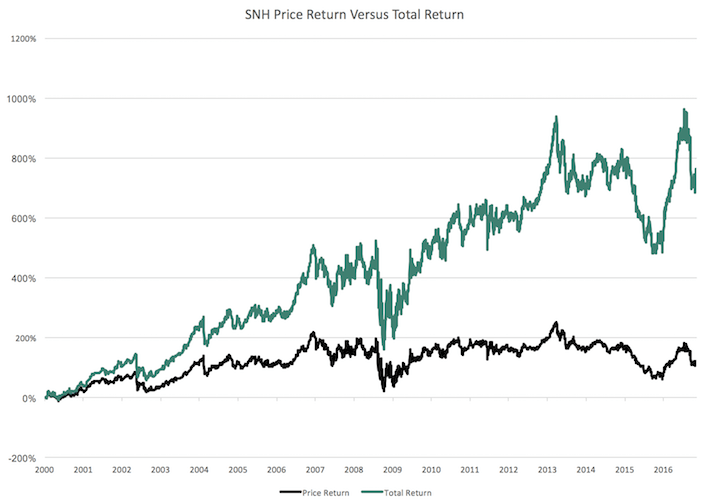 The stark difference between SNH’s total price return and total return underscores the significance of their 8% distribution yield.

Expected returns will be composed of growth in funds from operations (FFO), the company’s cash distribution, and valuation expansion/contraction.

One straightforward way to assess the valuation of REITs is by looking at their distribution yields. The higher the yield, the better the valuation.

SNH appears to be trading somewhere close to fair value (perhaps a little on the undervalued side). I do not multiple expansion/contraction to be a significant driver of returns for this company in the near-to-mid future.

Rather, total returns will be composed of:

For an expected total return range of 8-10% over the long term.

With its yield trading slightly above its 5-year historical average, the company is trading near fair value. The company is also poised to benefit from the aging Baby Boomer population.

However, the real estate industry does not typically perform well during recessions. With a normalized FFO payout ratio of 88% during Q3 2016, SNH’s distributions (like most REITs) do not have a large margin of safety if the economy were decline.

This is something that potential SNH investors should keep in mind before purchasing this stock.

Senior Housing Properties: A 7% Yielder Backed By the Graying of America