The major U.S. stock indices finished lower for the second consecutive week, led by the Russell 2000, which lost 2.5%. Since small caps, along with technology stocks, typically lead the broader market higher and lower, last week’s relative weakness in the Russell 2000 suggests investors were bracing for the potential implications of a “no” vote to Sunday’s bailout referendum in Greece. This Greek debt crisis has dominated both the headlines and recent market direction.From a trend standpoint, last week’s market decline positioned a number of major U.S. indices, including the S&P 500 and Dow Jones Industrial Average, right on top of their 200-day moving averages. Their larger bullish trends must resume from this widely watched major proxy if still valid.Put another way, any further weakness that meaningfully breaks these moving averages could mark the beginning of a deeper decline. Therefore, Market Outlook readers should keep a particularly close eye on the markets and their investment portfolios this week. They should also already have a defensive plan in place in case things go south.The utilities sector was the only in the S&P 500 to post a gain last week as a decline in both long-term U.S. interest rates and equities made these defensive, yield-paying stocks particularly attractive. However, Asbury Research’s own ETF-based metric shows that, on a percentage basis, the biggest outflow of assets over the past three-month period came from utilities.

So, at least until we see some asset flows back into this sector, last week’s strength in utilities appears to be a near-term reaction to current market conditions rather than an emerging trend of sector outperformance.This metric also shows investor assets are going into financials, as the sector has attracted the biggest percentage of inflows over the past one-week, one-month and three-month periods. As a result, Financial Select Sector SPDR Fund (NYSE: XLF) has outperformed SPDR S&P 500 ETF Trust (NYSE: SPY) by 3.6 percentage points since late April and is likely to continue this outperformance as long as these inflows continue.Market Testing Major SupportIn last week’s Market Outlook, I pointed out that the bellwether S&P 500 was situated right at the top of its recent range while technically overbought, which warned of the index’s vulnerability to a near-term decline. Decline it did, with a big 2.1% drop on Monday and 1.2% drop for the week.Last week’s decline has not only positioned the index just above its 200-day moving average at 2,055, but also resulted in oversold conditions. The green highlights show that the last time this combination of major support and oversold extremes occurred was on Feb. 2, and it resulted in a quick and aggressive resumption of the S&P 500’s larger advance. 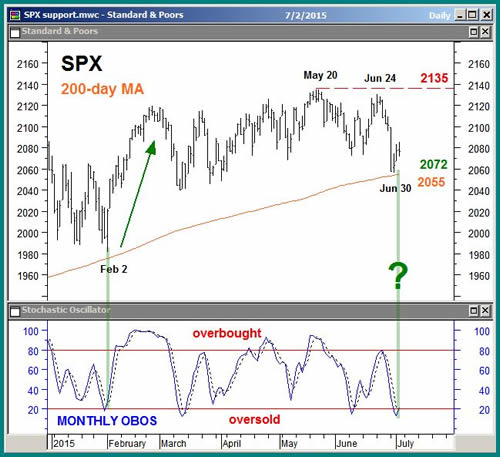 This situation provides us with a means to gauge whether the current bullish trend is still healthy and intact, or if there is still more weakness to come as suggested by technology bellwether Cisco Systems (NASDAQ: CSCO), which I also discussed last week.

Seasonality Warns Of More WeaknessWhen a particular asset class is at a major inflection point like the S&P 500 is right now, seasonality trends can often provide investors with a sneak preview of how that inflection point will be resolved.The next chart displays third-quarter seasonality in the S&P 500 since 1957 via 13 weekly columns, which plot the index’s average weekly percentage gain or loss during this period. 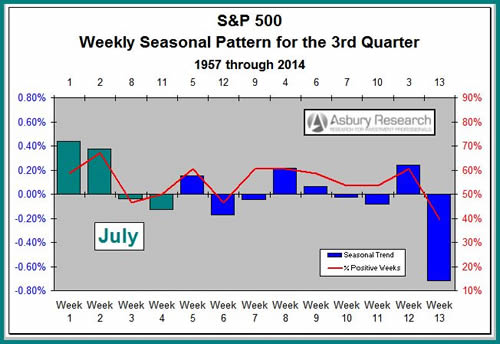 Historically, the first two weeks of July are the strongest of the entire third quarter, after which the S&P 500 gradually weakens into its quarterly lows at the end of September. Although this suggests the potential for a minor near-term rebound in the S&P 500 from its 200-day moving average as investors attempt to “buy the dip” off of a major support level, it also warns this rebound is likely to fail during the second half of the month.Putting It All TogetherA number of major U.S. stock indices, including the bellwether S&P 500, begin this week situated just above major support at their 200-day moving averages while technically oversold. In a healthy uptrend, these conditions typically result in a near-term bottom and the beginning of the next leg higher. However, recent weakness in technology bellwether Cisco, combined with weak seasonality data during most of the third quarter, warn investors not to take the resumption of the stock market’s larger advance for granted this time. 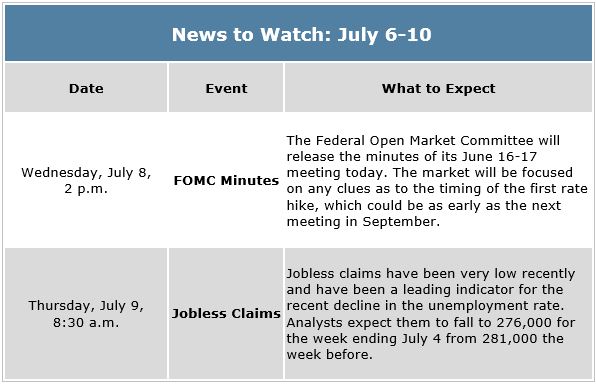 Generally speaking, buying off the 200-day moving average during an uptrend is a smart move for investors, and this may indeed turn out to be the case again this time. However, if prices fail to rally this month despite these ideal conditions, it would warn that there may be another potentially nasty leg lower in store. Keep an especially close eye on the market this week and consider tightening protective stops on long positions.