Natixis Global Asset Management recently published a white paper, Can the Federal Reserve Be Replaced by a Mathematical Formula?, highlighting the Fed Oversight Reform and Modernization act approved by the Financial Services Committee of the House of Representatives. This Act would require the Fed to establish a mathematical formula in setting interest rate policy. Not surprisingly, the Fed is not in favor of this type of proposal.

Several highlights in the Natixis paper: 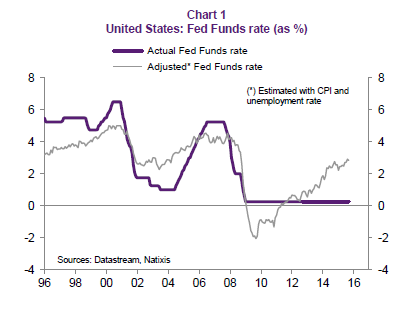 From The Blog of HORAN Capital Advisors

The paper notes that today the Fed uses other monetary tools other than adjustments to short term interest rates:

“purchases or sales of financial assets, generally as part of a quantitative easing programme; in the future, increasingly, banks’ prudential ratios (capital ratios, required reserves, etc.). This makes it possible to markedly increase the effectiveness of monetary policy compared with a situation where only the short-term interest rate is controlled, especially by also controlling long-term interest rates”

By not using a formula and,

“By freely setting monetary policy over the past 20 years without being constrained by the use of a mathematical formula, the Federal Reserve has let the following appear:

“A more complex mathematical formula than a Taylor rule could have forced the Federal Reserve to react to these developments and to not let excessive indebtedness and asset price bubbles develop, which led to the subsequent financial and banking crises.”

One conclusion from the white paper notes a formula alone may not serve as the only solution; however,

“But we should not forget that a complex formula that takes into account credit, asset prices, external deficits, etc. would prevent the errors of judgement and monetary policy choices that for the last 20 years have led to – particularly in the United States – crises linked to excessive indebtedness and bursting asset price bubbles.”