EconMatters- April 30, 2015, 6:52 AM EDT
SHARE ON:
Until less than a decade ago, there was no real need to address the forty-year ban on exporting crude oil from the United States. Over the 38 years to 2008, the country had seen an average annual decline of 1.7% in production and was only exporting a very small amount to Canada.
That all changed with the shale drilling revolution as oil production jumped 74% to 8.68 million barrels a day over the six years through 2014.
Lifting the oil export ban in 2015 could add $1.8 trillion to our nation’s annual GDP, according to a 2014 study by NERA Economic Consulting, a nonpartisan consulting group. The resulting acceleration in economic growth could create an additional 230,000-to-380,000 jobs in the five years to 2020.
With such strong benefits to the economy, why is it taking Washington so long to repeal the antiquated ban on crude exports?
Besides environmentalists that argue lifting of the ban would result in higher domestic production, the fight to keep the ban in place is being fought by one industry, in particular, because it could mean disaster for its profitability.
The industry may soon lose that fight and you might consider protecting your portfolio before it happens.
Likelihood Of Repealing The Crude Export Ban
The recent plunge in the price of oil has been met by a historic decline in the number of drilling rigs and it looks like production will start decreasing within the next six months. While it may seem that lower production would take the impetus off of crude exports, looking at the bigger picture paints an entirely different picture.
The graph below presents U.S. crude and condensate proved reserves as measured by the Energy Information Administration (EIA). Proved reserves have skyrocketed since the shale boom started six years ago. 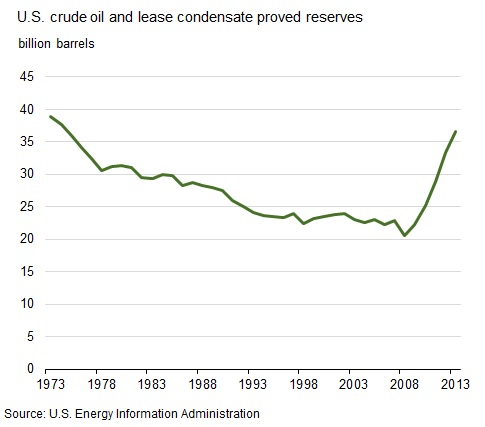 More than 9.1 million barrels were pumped out of the ground every day in January. With 36.5 billion barrels of proved reserves, we have nearly 11 years of production waiting to be pumped.
The decline in drilling rigs and capital spending will support prices and production will remain relatively strong in the United States. The price spread between the international oil benchmark (Brent) and the domestic counterpart (West Texas Intermediate) is more than $7 per barrel, which is a strong incentive to push for exports.
That is so appealing that the CEO of Pioneer Natural Resources puts the chances of repealing the export ban between 40% and 50% this year. If that doesn’t happen, then he estimates there’s an 80% likelihood that we’ll be exporting oil by 2017.
Senator Lisa Murkowski, R-Alaska and Chair of the Senate Committee on Energy and Resources, said she will introduce legislation this year to lift the ban.
A strong voice is building for a repeal of the ban on crude exports, but behind the scenes is a nearly 100-year-old law called the Jones Act that could mean significantly lower profits for one industry.
A Century-Old Law Could Mean Disaster For Refiners
The Jones Act, also known as the Merchant Marine Act of 1920, mandates that shipping between two U.S. ports must be by domestic-built ships and crewed by U.S. citizens. The act was created to ensure a strong maritime industry that would provide for national defense and shipping commerce.
Refineries on the East Coast process light-sweet crude, the type of production that has boomed from resources like the mid-continent Bakken shale region. The lack of pipeline transportation means that East Coast refiners must get their crude by rail and on barges from other U.S. ports. Under the Jones Act, it costs East Coast refiners $5-to-$6 per barrel to ship crude from the gulf.
If crude exports were allowed, but the Jones Act remained in place, then a European refiner could buy U.S. crude, refine it and ship the products back at a $0.07-to-$0.09 per barrel price advantage to East Coast refiners because of the relative cost in operating foreign ships.
The graphic below is part of a study conducted by NERA and prepared for The Brookings Institution in 2014. It shows the economic effect of lifting the export ban (No Ban Case), which significantly reduces gross margins for refiners under a high oil and gas resource scenario (HOGR). 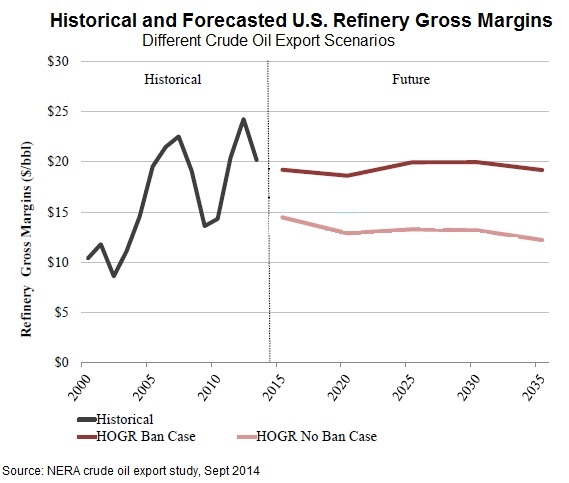 Not only would water transportation be relatively expensive, rail transportation of crude may take a hit as well. If the crude export ban were lifted, then the Light Louisiana Sweet-to-Brent price spread would compress, making it even more expensive and unprofitable to move crude by rail from the Bakken to the East Coast.
A repeal or amendment of the Jones Act, allowing foreign-flagged and operated ships in U.S. waters, is unlikely to happen. The act enjoys strong support in Congress and from the trade unions. Pennsylvania alone has more than 9,720 shipbuilding and ship-repair jobs, followed closely by New Jersey with nearly 6,000 shipbuilding jobs.
Against the weak outlook for east coast refiners, European refiners may be the biggest beneficiaries. Profits at European refiners jumped to a 10-month high in March on strong export demand and could go even higher if U.S. crude exports are allowed. Refined fuel demand to West Africa, the U.S. and Latin America is increasing quickly and supporting a high crack spread (the difference between Brent crude price and gasoline).
Since the export ban is likely to be repealed, but the Jones Act is unlikely to be lifted, then who will be affected, both negatively and positively?
PBF Energy Inc (NYSE:PBF) owns refineries in Delaware, New Jersey and Ohio with a combined production capacity of 540,000 million barrels per day. The company joined a coalition of four refiners last year to oppose a repeal of the crude export ban and has the most to lose of any publicly-traded refiners. The two east coast refiners constitute 68% of the company’s total throughput capacity.
Shares trade for a seemingly cheap 4.5 times trailing earnings, until you consider that sales are expected 42% lower to $11.5 billion this year and earnings are expected to fall 13% to $3.96 per share.
Investors looking for downstream energy exposure may want to consider a position in European refiners, which would stand to benefit from improved price competition against domestic peers.
Total SA (ADR) (NYSE:TOT) holds the largest refinery capacity in Europe with 2.4 million barrels per day of throughput. While the company’s integration across upstream and downstream will smooth effects, the upside on refinery operations could contribute significantly to earnings.
Risks To Consider: If the crude export ban is not lifted this year, it may have trouble in 2016 due to elections, but the issue will likely pick up again in 2017. Refiners could be given a lifeline this year and next if the issue is pushed off the table.
Action To Take –> Investors may want to avoid or even short shares of east coast refiners. In conjunction, consider a long position in international refiners like Total on the potential for a change in price competition after a lift of the U.S. crude export ban.
Research Report
analyst ratings
blogger opinions
investor sentiment
news sentiment
analyst ratings
insider activity
hedge funds
stats charts
You May Also Like