Sales by e-commerce retailers jumped 15.8% year-over-year in the second quarter, according to the Census Bureau, and companies involved in getting the packages to consumers and businesses have seen growth in those segments. For the rest, not so much – as the goods-based economy is getting bogged down.

And this has been showing up in broader shipping data. The Cass Freight Index for August, released today, fell 1.1% from a year ago, to 1.115, the worst August since 2010! The 18th month in a row of year-over-year declines!

“Overall shipment volumes (and pricing) are persistently weak, with increased levels of volatility as all levels of the supply chain (manufacturing, wholesale, retail) continue to try and work down inventory levels,” Donald Broughton, Chief Market Strategist at Avondale Partners, wrote in the report.

The Cass Freight Index is based on “more than $26 billion” in annual freight transactions by “hundreds of large shippers,” according to Cass Transportation. It does not cover bulk commodities, such as oil and coal but is focused on consumer packaged goods, food, automotive, chemical, OEM, and heavy equipment.

It’s not seasonally adjusted, so it shows strong seasonal patterns. In the chart below, the red line with black markers is for 2016. The multi-color spaghetti above it represents the years 2011 through 2015. So here’s how dismal the “economic recovery” has looked in 2016 so far: 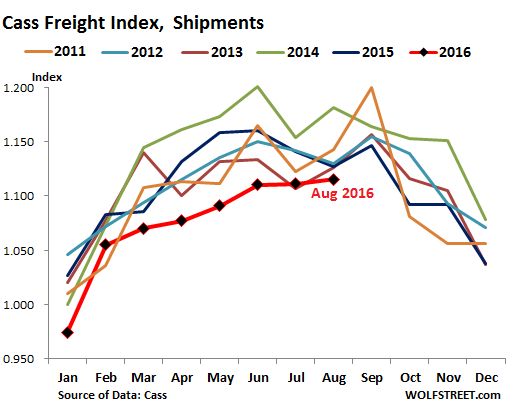 The report pointed out the growth in e-commerce – the one aspects of the goods-producing economy that is hopping. But it also said that the transit modes servicing the auto and the housing/construction sectors were weak. Both sectors are crucial to the US economy.

And rail, as has been the case recently, caught the brunt of it. According to the Association of American Railroads carload traffic – which includes commodities such as oil and coal – fell 6.6% in August from a year ago, and intermodal traffic (containers and trailers), fell 4.8%.

Trucking in “mixed” condition – tonnage up, load volume down – and railroads in the tank: hence the worst read in the freight sector since 2010. Plenty of culprits. Weak demand is in part caused by inventories that had been rising so sharply, starting in 2014, that the all-important inventory-to-sales ratio reached Lehman crisis levels. Recently, businesses have been trying to whittle down their inventory levels by reducing orders, and this is impacting the freight sector. Given that inventories remain at very high levels, and the inventory-to-sales ratio at crisis levels, both the high inventory levels and the draw-downs, along with their impact on freight, are likely to continue.

Broughton adds, “We remain concerned about elevated levels of cars on dealer lots, and we acknowledge continued efforts to streamline finished inventory in most machinery sectors.”

This is the problem with the auto sector: sales have started to cool, even as production hasn’t yet. Something is going to give. If sales don’t pick up miraculously, production will be cut, further hitting railroads and trucking.

With freight volume in this precarious position, the freight expenditures index dropped 6.3% in August year-over-year, to the lowest August since 2010: 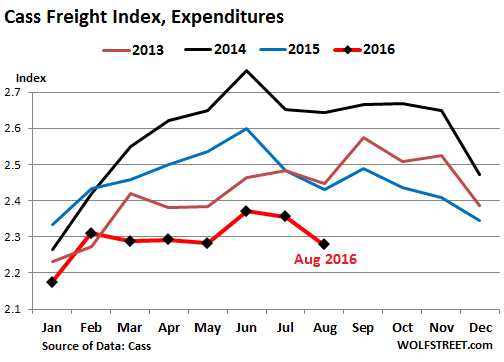 The report blamed the swooning freight expenditures in part on lower fuel surcharges that shippers have to pay, as diesel and jet fuel prices have declined (though they’re currently down only slightly from a year ago). And then this gem:

We continue to see this weakness as driven by the excess of capacity in most modes: trucking, rail, air freight, barge, ocean container, and bulk.

“Excess of capacity” – or overcapacity – is a term that has come to haunt the global economy, after eight years of QE and zero-interest-rate policies, during which the cost of capital and the idea of risk got manipulated away, and when the alcoholic fumes of money-printing clouded executive decisions and projections. Now there’s a real-economy price to pay.