Reasons to Be Positive About Twitter Inc (TWTR)’s Future, But Not its Current Quarter

Earnings for consumer facing online ad sellers have been shaky so far this quarter.Facebook Inc (NASDAQ:FB), Yahoo! Inc. (NASDAQ:YHOO), and Google Inc(NASDAQ:GOOG) have all missed their consensus estimates from Estimize. Twitter Inc (NYSE:TWTR) will be next to try its luck Tuesday after the closing bell. 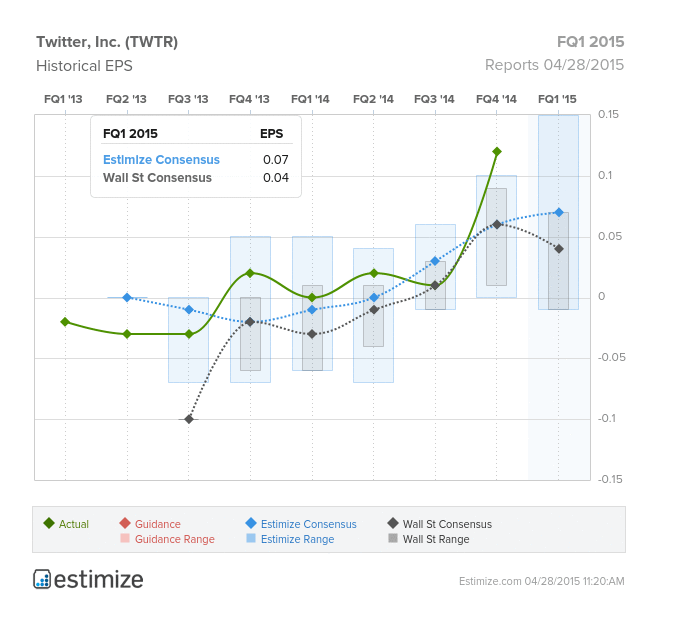 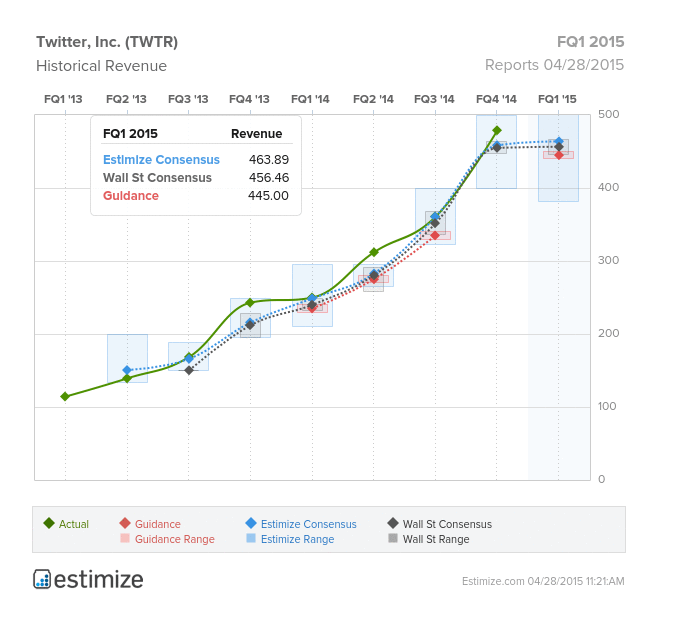 Twitter pulled in $479 million in revenue, beating the Wall Street consensus of $455 million and topping the projection from Estimize, $464.5 million.

The financial tide at Twitter is expected to continue rising. Estimize contributors are predicting that earnings will rise from break-even to 7 cents per share this quarter and revenue will improve 86% to $464.36 million. In the immediate term not everyone is convinced that Twitter can match steep expectations. Since the middle of April the Estimize revenue consensus has fallen 1% from $469 million. That’s not a huge change in consensus, but it is significant over a week 2 timeframe and the directionality of analyst estimate revisions often serves as a leading indicator. SunTrust Robinson Humphrey internet equity research analyst Bob Peck downgraded Twitter Monday morning from buy to neutral cutting his price target from $58 to $50.Peck’s estimate is significantly higher than most of his peers on Wall Street, but it’s still below the Estimize consensus which suggests that the market may respond negatively if he hits the nail on the head.

Estimize contributors don’t expect Twitter to have a bad quarter by any stretch of the imagination. But there are legitimate reasons to be concerned that the bar may be set too high. Looking past the challenging expectations for the current quarter, the past 3 months have been positive for Twitter on the product side of its business.

In March Twitter launched its live-streaming video app, Periscope. Periscope should help boost Twitter’s video advertisement opportunities and encourage high levels of engagement because of its real-time nature. Twitter also finally productized quoted tweets, which users had been doing using a work-around for years. These product improvements could help Twitter grow its user base and engagement metrics over time which have historically been analyst concerns because of the (perhaps unrealistic) comparisons to Facebook.

In the short run under-performances from peers and stalling expectations leave some reason to be worried about Twitter’s upcoming earnings report. Once we get past this afternoon, nearly doubling revenue and tangible product improvements leave the future looking brighter.