On the left hand side of the chart below, mortgage rates peaked at 18.28%. By comparison, today’s rate is hovering at less than 4%, a whopping 4.5 timesoff the peak. More importantly, there was no time in history when a mortgage loan was cheaper than today. As we now know, it was all the Fed’s doing. Mathematically, unless they figure out a way to go negative, they are done. Can the real estate market flourish when 35 years of continuous stimulation is removed? 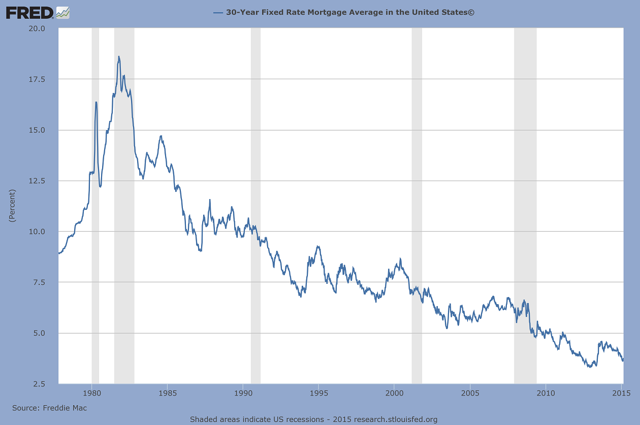 35 years ago, a 20% down payment was the norm. There were 3.5% down FHA loans, 5% down agency loans available as well, but they were not particularly popular because of the cost of mortgage insurance. The net effect of a larger down payment is a bigger cushion that helps with absorbing market fluctuations. Today, especially at the entry level, there is no room for error. These <5% down loans are all one paycheck away from default.

Once upon a time, there were over and under ratios, which meant the same as front-end and back-end ratios (mortgage debt vs. total debt). The rule of thumb was around 30/40. There were many different types of lenders, such as S&Ls, portfolio lenders, private money, and a minority would consist of the agency secondary market. There were real loan officers, or loan committees, that approved or denied loans based on overall qualifications. Today, it is all about conforming to agency guidelines. This will favor the haves and be restrictive for the have-nots. Attempts to help the have-nots by increasing the DTI ratio are only putting more marginal borrowers at risk.

This is usually an overlooked factor. There are so many new expenses that did not exist previously. The obvious ones are the cable fees, Internet fees and cell phone fees. Among the less obvious ones are car leases, which are essentially replacing the old, but owned models with a rental that must be renewed every 2-3 years. Then there are the Starbucks that somehow became essentials. Finally, the biggie that was not much of a factor 30 years ago is education. $1 trillion in tuition debt has to come from somewhere. Today’s DTI should therefore be lower, not higher than yesteryear’s. So what is making up for this budget gap?

We know our national debt does not include unfunded liabilities. The unknown is how much they really amount to. We know pension plans are underfunded. The unknown is again by how much. We know the same about household budgets. The big unknown is how these deficits will be made up. Once upon a time, it was common to retire and have a mortgage burning party at the same time. Today, it is not uncommon to reach retirement age and have 29 years left on a 30-year mortgage. Since housing remains the biggest expense for the average household, this deficit should assert pressure on housing for the next decade or two.

The era of cradle to grave jobs is gone. Career moves requiring relocation are far more common today. Transaction costs of a purchase and sale cannot be recovered easily without a faster pace of price appreciation. This trend will keep the percentage of home ownership low and will probably push it even lower.

Large income inequality is something many nations are faced with today. Politicians and central bankers talk about it, but none of them have any good answers. With respect to housing, minimum wage Wal-Mart associates are not only having difficulty buying a home, they are probably struggling to pay rent as well.

Most of the things I enumerate above are not quantifiable, but they are a bigger factor for real estate than the old school household formation and job creation theories. In conclusion, there are no economic forces that will drive up housing prices for a long time to come. This doesn’t mean that we shouldn’t own houses just that doing so is rapidly becoming a privilege for those who can truly afford it. As for homes as an investment, I think that may be a little overly optimistic.