Rate Hike This Year Still In The Cards?

EconMatters- May 6, 2015, 11:44 AM EDT
SHARE ON:
Chicago Fed President Charles Evans recommends waiting until 2016 to start raising interest rates. The tipping point, he advised in a recent speech, should be compelling evidence that wages are rising in a robust degree. For the moment, that evidence is lacking, he noted. Yet it’s not obvious that the Treasury market agrees with Evans. Yields on government bonds are still trending higher, despite a mixed batch of economic reports in recent weeks.

The benchmark 10-year Treasury ticked up to 2.16% yesterday, the highest since early March, based on the government’s constant maturity estimates. Meanwhile, the 2-year yield—widely viewed as the most sensitive spot on the yield curve for rate expectations—held at a four-week high yesterday of 0.60%. Yes, these are still mild increases relative to recent levels, but the gains suggest that the crowd’s looking for the Fed to start raising rates later this year, perhaps as early as the September policy meeting. 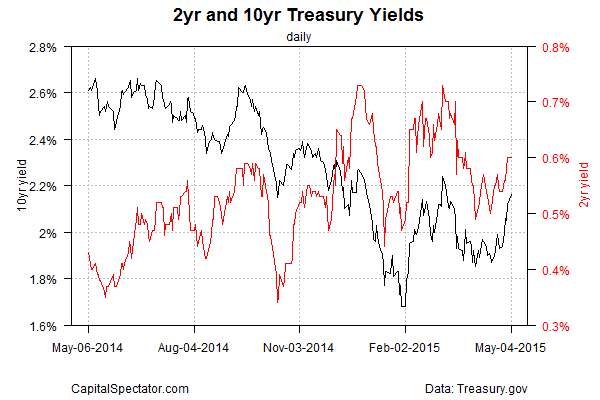 On the other hand, the Fed funds futures market is still pricing in a rate hike in September as a low-probability event. The implied probability of Fed funds above the current zero-to-0.25% range in September is around 30% this morning, according to futures data from the CME Group. The odds don’t move above 50% for raising rates above the current range until the Dec. 2015 contract, which implies that Evans advice resonates with this slice of Mr. Market’s forecasts.
Meanwhile, the Treasury market’s implied inflation forecast (nominal less inflation-indexed yields) still appears to be trending higher, albeit mildly so and after sinking to a near-four-year low earlier this year. But for the moment, there’s still an upward bias bubbling. For instance, inflation is expected to be 1.91%, based on 10-year yields as of yesterday (May 4)—up from the recent low of 1.73% at the end of March. 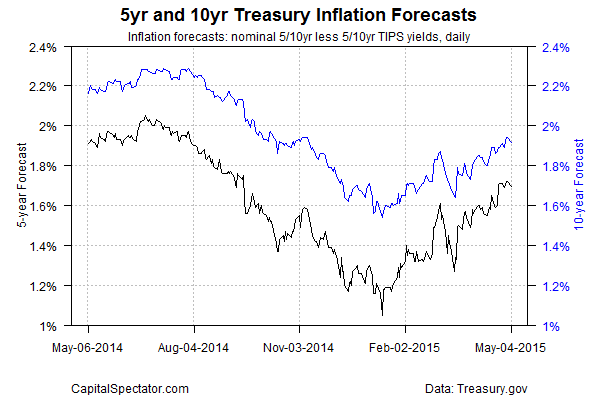 But all bets are effectively on hold until we see this Friday’s employment report for April. The crowd’s looking for a hefty rebound in growth. Econoday.com’s consensus forecast calls for a 220,000 rise in total non-farm payrolls for last month, a sharp improvement over March’s dismal gain of just 126,000.
Sounds good, but the Atlanta Fed’s current estimate for Q2 GDP looks weak—a slim increase of just 0.8% as of May 1. That’s slightly better than the disappointing Q1 rise of 0.2%, but just barely.
It’s still early for deciding how the current quarter is shaping up. Nonetheless, it’s going to be hard to project a solid rebound if Friday’s jobs report is weak. That’s considered unlikely, according to economists. An early clue on managing expectations for Friday arrives in Wed. private payrolls estimate for April via ADP. A stronger gain is expected here as well, albeit mildly so. Econoday.com’s consensus forecast projects that the private sector will add 205,000 jobs in April, up modestly from March’s 189,000 rise.
The future, in other words, is still cloudy. But clarity is just around the corner. The question is whether the sharper focus that’s coming will be good news for the macro outlook?
Research Report
analyst ratings
blogger opinions
investor sentiment
news sentiment
analyst ratings
insider activity
hedge funds
stats charts
You May Also Like