QuinStreet Inc (QNST): A Wreck Is Right Around The Corner

One minute, QuinStreet Inc (NASDAQ:QNST) was merrily redirecting traffic from Google searches and picking up millions along the way in exchange for generating leads.

The next minute, two trucks flew around the corner, with President Obama at the wheel of one and Google at the other. Wham!

Once investors understand the true impact of that double-whammy, we think they’ll agree that QuinStreet’s business model looks like a beat-up, old jalopy. We’ll explain why below but investors should also take a look at opposing viewpoints here.

QuinStreet gets paid for gathering information when people type in something like “online college degree,” or “credit cards,” or “cheap car insurance,” and then generating online sales leads for for-profit schools, credit card companies and auto insurance companies.

But QuinStreet’s Education division is clearly taking several huge hits – hits that promise to thwart future revenue in this area.

For example, President Obama veered into QuinStreet’s business with his plan for free community college.

This plan would damage QuinStreet’s for-profit education customer base going forward because many of the people who might appreciate the flexibility of a for-profit college would enroll in community college if it became free.

Just as ominously, federal and state regulators are cracking down on QuinStreet’s for-profit higher education customer. A US Senate committee revealed a disturbing investigation into for-profit education. And attorney generals across the country have been investigating these colleges’ “dubious practices.”

The US Department of Education forced Corinthian – already slapped with a $30 million fine – to close the last of its campuses just a few weeks ago.

With $6 billion in federal student loans and grants, Corinthian was a significant client for QuinStreet. Its loss was not reflected in QuinStreet’s last earnings.

Corinthian proved to be the canary in the for-profit college mine, signaling the intensifying implosion of the industry. Along with Corinthian, Career Education Corp. and Education Management Corp. fell beneath federal regulators’ crackdown against colleges allegedly taking advantage of low income students and hitting them with debt. Regulators have left behind massive campuses closings, Education Management’s delisting itself from Nasdaq and a loss of nearly $8 billion in market valuation.

Here is the combined stock chart for Career Education and Corinthian Colleges:

Even more QuinStreet education customers or potential customers may get weeded out when new requirements go into effect July 1.

At that time, career colleges and others will lose access to federal student aid money unless they prepare students for gainful employment. Annual loan payments will have to be no more than 8 percent of grads’ earnings or 20 percent of discretionary income, under new federal regulations.

QuinStreet filings say regulations have hurt business previously and may be expected in the future.

QuinStreet is no stranger to regulators.

Attorneys general from 20 states investigated QuinStreet’s “GIBill.com” and contended misleading, false and deceptive elements fooled veterans who clicked on the site believing it was associated with the US Department of Veterans Affairs. They charged that the schools QuinStreet listed were the only ones where students could use their military education benefits. That was not the case.

QuinStreet forked out $2.5 million in the 2012 settlement while denying any wrongdoing. The agreement, signed by QuinStreet’s CEO Douglas Valenti, included mandatory website disclosures and the company’s turnover of GIBill.com to Veterans Affairs.

Investors can see, then, that the regulatory environment can certainly cost QuinStreet.

We searched for “cheap car insurance” to see if QuinStreet properties carinsurance.com, insurance.com or insure.com would appear in our Google search.

A snapshot of the top companies that came up on the first search page shows that insurance companies like Geico and Progressive show up in the paid ads but also just below the paid ads. 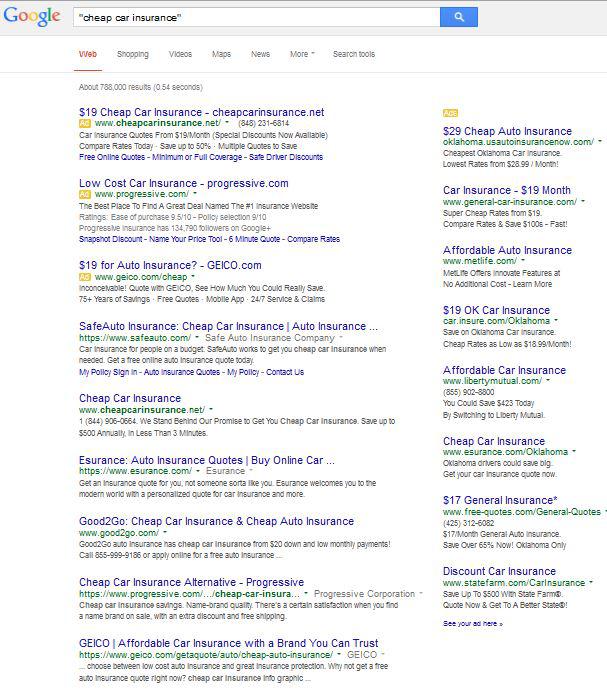 None of QuinStreet’s properties appeared until the second page, where insurance.com finally pops up in the third slot from the bottom, as shown below. And while searchers are most likely to click on one of the first couple of search results that appear, page after page failed to return the other QuinStreet websites. 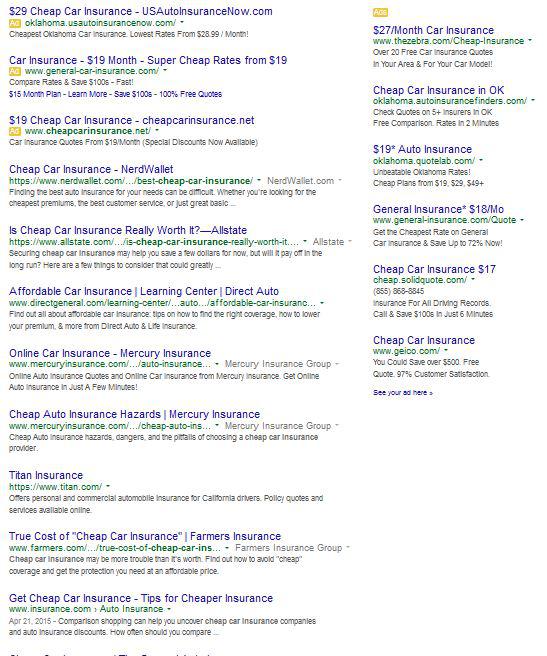 As if that’s not enough, QuinStreet notes the competition is intense and barriers to entry are relatively low. In the Financial Services division, for example, its MoneyRates.com faces mammoth rivals like Bankrate.com.

Additionally, QuinStreet must deal with algorithm changes by Google – Panda, for example, raised traffic to quality sites and lowered low-quality sites’ ranking. QuinStreet expects additional changes in the future and can’t predict the cost of the change to QuinStreet sites.

In fact, Google appears to be seeing less and less purpose in a middleman like QuinStreet.

How so? Look at the top results for our search for “credit cards,” a significant search because QuinStreet is trying to strengthen its Financial Services division with emphasis on CardRatings.com.

After 25 search page results, CardRatings.com still hadn’t shown up (creditcards.com is not a QuinStreet property, incidentally). What did pop up in the first slot, first page? “Compare 60+ Credit Cards Online with Google.” This indicates that Google sees less and less usefulness for QuinStreet-type middlemen: 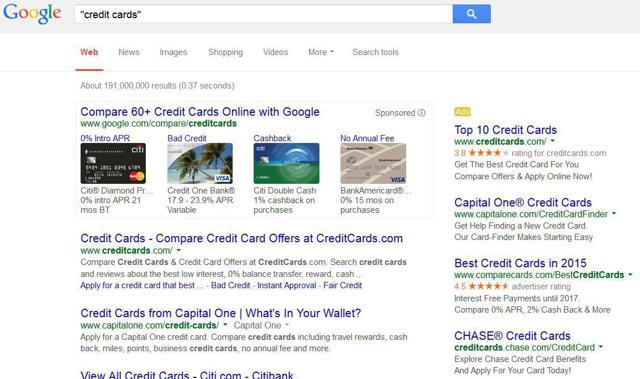 So Google searches are redirecting traffic to big companies like Geico, Esurance or Progressive. There’s not really much use for QuinStreet. These companies can be expected more frequently to go straight to Google rather than paying middleman QuinStreet for clicks. The company is seeing the effects already in terms of rising media costs, which last quarter jumped by $4.2 million.

“That’s the problem with their business model,” an analyst who requested anonymity told TheStreetSweeper. “A lot of customers are smart enough to say, ‘I’ll bypass you and go pay Google myself.'”

So, customers are becoming competitors and that trend is likely to strengthen.

“That’s a secular, long-term trend,” said the analyst. “That’s why guys like QuinStreet will always be in trouble.”

QuinStreet has a history of operating losses extending through 2013. And while reporting a mixed quarter in the third quarter of FY 2015, the numbers are not impressive under closer scrutiny.

But … Education was flat from the previous year and just managed to be flat primarily because deferred revenue of $1.6 million got thrown in there.

Gross margins were down one point, shaving those razor-thin margins down to 13 percent. And net loss per share got worse at $-0.07. Operating cash flow over nine months reached a net loss of $-15 million.

Bulls assume margins will improve, auto insurance customers will grow, Brazil Education will gain, and changes in lead conversions in Education will help avert some declines due to regulation pressures.

So, is QuinStreet worth our investment dollars? Credit Suisse seems to say, “It’s a terrible investment.”

The bank applied the same methodology to QuinStreet as that applied to the rest of the Internet sector. Computations estimated future cash flows and considered the time value of money to determine the DCF or discounted cash flow.

“…we have based our price target on DCF, which remains at $4.”

“We have used a weighted average cost of capital of 14.0% with terminal growth rate expectation of 0%.”

Credit Suisse’s reiterated “underperform” and $4 price target for 12 months came out May 6, when QuinStreet shares fetched from $5.32 to $5.70.

The investment bank noted 20 customers create over 60 percent of revenue. So anyone cutting back on marketing spend to QuinStreet could significant damage revenue. It also expects unimpressive gross margins at 10.9 percent in 2015 and 13.6 percent in 2016.

So, Credit Suisse, an investment bank that made Fortune Magazine’s list of world’s most admired companies, obviously considers QuinStreet a poor investment.

QuinStreet is currently valued as if it is growing like crazy. Yet, its own executives – though they may be influenced by their top compensation packages exceeding $4 million – say it can grow only 5 percent.

We think that’s wildly optimistic, considering the debilitating trends threatening to spin out of control: Google is muscling in to grab Financial Services, President Obama and regulators are pushing out Education, and customers are becoming competitors on the jagged, hazard-strewn road ahead of QuinStreet.

TheStreetSweeper believes even the $4 price target from Credit Suisse is too generous. We wouldn’t be surprised to see this wreck send shares crumpling to $3 or lower.