Following latest IEA report which showed that OPEC production had hit an all time high, OPEC released its own estimate of production by OPEC member nations for September and, not surprisingly, the latest report showed that in the month OPEC was supposed to be set on “cutting” production, the 14-nation group produced a whopping 33.39 million b/d crude in Sept., up 220k b/d from August.

While Saudi Arabia showed the largest decline of 88K to 19.49mmbpd, other members promptly ate up the Saudi market share which as recently as last month hit a record. To wit

Even more notable is what we touched upon last month after the Algiers deal was announced, namely that Venezuela and Iraq oil output may be underestimated by as much as 565k b/d for Sept., according to secondary sources cited in OPEC’s monthly oil market report.

Recall that OPEC “agreed” to cut total output to 32.5m-33m b/d as part of agreement to steady oil markets, however both Iraq, Venezuela have disputed secondary sources. This means that if OPEC agrees with the country’s own source data, the cartel will need to cut as much as 565k more, an output cut which would have to come out of Saudi production. 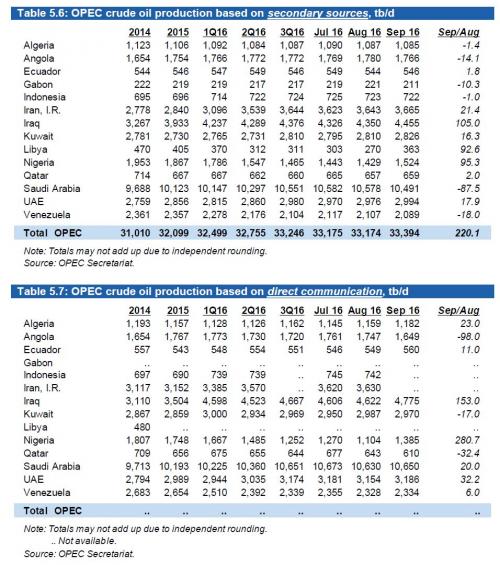 This is how Bloomberg put it:

The scale of the internal differences OPEC must resolve before securing a deal to cut supply was revealed Wednesday as the group’s latest output estimates showed a half-million-barrel difference of opinion over how much two key members are pumping.

Venezuela and Iraq’s own figures on how much crude they produced in September were 565,000 barrels a day higher than estimates compiled by the Organization of Petroleum Exporting Countries from so-called secondary sources. The two nations are disputing the data, which could determine the production target for each country when caps on members’ output are decided next month.

Venezuela told OPEC it pumped 2.33 million barrels of crude a day in September, 245,000 more than estimated by secondary sources, which include news organizations such as Platts and Argus Media as well as the International Energy Agency. Iraq said it pumped 4.78 million barrels a day, 320,000 more than the secondary-source view. The total discrepancy for both countries equals the daily production of Ecuador.

Of OPEC’s 14 member countries, Iraq and Venezuela are the only two that have publicly criticized the sources’ figures. Yet there are five others whose own estimates are higher than those provided by secondary sources. Three nations — Angola, Nigeria and Qatar — provided estimates that are lower.

But what was most amusing in light of the above, is that according to the OPEC secretary general Mohammed Barkindo tells reporters in Istanbul. “OPEC has still hasn’t decided yet whether OPEC and non-OPEC would make cuts at the same time, or OPEC would move first.”

So the OPEC production cut will take place… but non-OPEC – i.e., Russia and US shale – cuts first?

And just to top the soaring confusion, Putin said that Russia would only join OPEC if the organization agreed on a freeze, something which considering the scramble by all non-Saudi nations to pick up Saudi market share, is very unlikely to happen. Oh, and Russia refuses to cut production.

Finally, as a reminder, this is what will happen in November according to Goldman if there is no deal:

The post-Algiers rally in oil prices has continued, fueled by comments by Russia and Saudi Arabia today (October 10) that point to a greater probability of reaching a deal to cut production. Saudi Arabia likely holds the reigns to such an agreement, with signs of elevated funding stress potentially driving Saudi to commit on November 30. As usual, risks of a disagreement are not negligible with Iraq currently the most vocal opponent, aiming to grow production next year and disputing usual measures of its production as too low. Failure to reach such a deal would push prices sharply lower to $43/bbl in our view as we forecast that the global oil market is in surplus in 4Q16.