Quick commercialization of drugs in clinical trials has long been held as a fantasy for makers of pharmaceuticals and biologics. With recent news, it appears the fantasy may become reality, featuring Pluristem Therapeutics Inc. (NASDAQ:PSTI) as its star player set to tackle multi-billion dollar medical markets.

On May 18th , Pluristem announced its PLX cell therapy for critical limb ischemia (CLI), a life-threatening blockage in the arteries of the legs, was chosen by the European Medicines Agency (EMA) new Adaptive Pathways (AP) pilot project – one of six from a shortlist of 10 and out of 34 total applicants – to participate in this revolutionary model of clinical trialing for new drugs designed to bring novel therapies to market in record time. This is a major clinical and regulatory score for Pluristem, lending them a great opportunity to hurry their products to market as early as the completion of Phase II in CLI.

Like the US, countries of the European Union feel mounting pressure on healthcare systems that call for a better, more targeted use of medication to increase therapeutic value. Clinical studies designed to hone in on smaller, well-defined patient populations would lower the need for high drug development financing and allow more drugs to enter the market, quicker. Such is the thinking of the EMA, a sister organization to our FDA, resulting in its Adaptive Pathway project, launched in March 2014. Six companies have been chosen to participate in what is considered a pilot program to make the switch from large clinical trials to smaller, less expensive ones. Pluristem is one of them.

Drugs chosen for the pilot are directed to patients with limited options, with drug makers in early clinical trials before efficacy is established in larger populations. Initial marketing approval will be sought for restricted patient populations, then expanded (or narrowed) as more data is gathered. ‘Conditional’ approval can be achieved with the promise to generate more clinical data in the future. Both of these models fit Pluristem’s strategy to get to market as soon as possible.

From my research, I found only one other publicly-traded company accepted under the EMA’s AP – bluebird bio, Inc. for LentiGlobin BB305, a gene therapy for rare disease beta-thalassemia. This clinical-stage biotechnology company, not much further along than Pluristem with less in its pipeline, trades at a whopping $6 billion market capitalization and has risen significantly since news of induction into the EMA’s new program.

CLI is the culmination of peripheral artery disease (PAD), or atherosclerosis of blood vessels in the legs, leading to intermittent claudication (IC) characterized by pain upon walking. When a patient reaches CLI, blood flow to the leg is severely limited; arterial tissue dies, ulcers and gangrene result, and amputation is the only option.

Nearly half of PAD patients with IC progress to CLI. Left untreated, PAD developing into CLI represents $22 billion in amputation costs. Medications for PAD comprise blood thinners – the most popular is Plavix by Bristol-Myers Squibb Co., but side effects are bad, including major bleeding in up to 5% of patients. Treatment with Plavix is life-long and dangerous, making CLI an unmet medical need, fulfilling the EMA’s AP benchmark for inclusion in the pilot program. If trials for CLI are successful, market entrance could come as early as 2018.

Early in May, Pluristem and Japan, the 2nd largest healthcare market in the world with a high interest in regenerative medicine, agreed that Pluristem’s manufacturing of PLX-PAD cells met regulatory requirements under Japan’s Pharmaceuticals and Medical Devices Agency (PMDA), hastening initiation of Phase I/II studies in CLI in that country. Time to marketing approval would be greatly reduced under Japan’s Accelerated Pathway for Regenerative Medicine, put in place last November. Accelerated approval is conditioned on safety studies, with likelihood of effectiveness; in other words, statistically significant efficacy need not be demonstrated before a compound enters the market – a tremendous boon for Pluristem. Caveats include a time-limited commercialization window and post-marketing studies up to seven years to confirm safety and efficacy, not a bad price to pay for garnering early profits 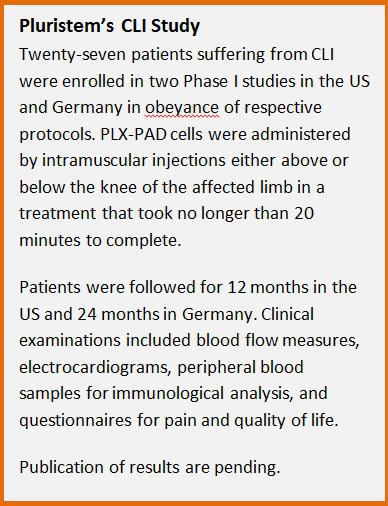 Both the EMA and Japan, under its respective programs, will allow for reimbursement of all products available to patients. This is a strong contrast to our healthcare system, where payment for new drugs or devices can take years, even after approval for marketing.

The aforementioned regulators of pharmaceuticals and biologics mimic FDA’s Breakthrough Therapy Designation signed into law July 2012, stipulating that when early data demonstrates significant improvement over existing therapies, early access to commercialization will be granted, assuming safety and efficacy in Phase II. FDA’s Breakthrough Designation differs from ‘Fast Track’ designation in that in the latter, typically all three phased trials must be completed with attendant safety and efficacy data.

The EMA’s AP and our FDA’s Breakthrough Therapy are similar because both will accept Phase II data that shows safety and efficacy. Japan differs somewhat – this country will take a ‘suggestion’ of efficacy and ask for more effectiveness data as more trials are performed. Pluristem does not have FDA Breakthrough Therapy designation yet.

While much regulatory risk is mitigated under the EMA and PMDA programs, investors’ biggest fear should be that PLX cells just don’t work in later clinical trials for CLI. My other concern would be the deployment of manpower to manage studies under the programs, in addition to other clinical trials Pluristem is juggling. However, they have staffed up talent significantly in recent years; besides clinical and regulatory help, many scientific advisories have been formed. Pluristem’s market cap is slightly under $200 million and liquidity should enter as a risk factor as well. On the other hand, news flow, a valued staple of larger companies, is brisk, reflecting the company’s ongoing clinical efforts.

Because the EMA intends to follow safety and efficacy results of drugs approved under its AP post-approval, adverse events not seen in more compact, quicker studies may present themselves, resulting in a drug recall. If all goes well and Pluristem reaches the market, investors may become impatient if partnering efforts to distribute PLX cells do not materialize fast enough.

Pluristem had approximately $42 million in liquid assets as of its first quarter, ended March 31, 2015. There is no debt, and approximate annualized burn rate is $25 million, giving them a little under two years of runway. The company, despite its many trials currently conducted and increase in personnel, has managed to drop operating costs by 19%, quarter over quarter.

Experience working with the EMA in past clinical trials has served Pluristem well. Acceptance into the AP pilot program and the potential to initiate trials under Japan’s PMDA are key achievements, placing PLX cell therapy at the forefront of regenerative medicine’s multi-billion dollar markets. Rapid approval, the goal of every drug and biotech firm, is now within the company’s reach, carrying with it the chance to change the face of medicine as we know it.