This shift is exactly what Saudi Arabia and OPEC were hoping for. It’s been keeping the taps on its competitors and driving down oil prices in order to price out high-cost shale oil production in the United States. It worked. Investment in shale oil has fallen 66% since 2014, according to Rystad Energy and Bloomberg.

And Saudi Arabia can afford to keep oil flowing because it’s cheap to produce there.

But the country is also playing a long game. A very long game.

The IEA is forecasting that the oil supply glut will stick around at least through 2017. Saudi Arabia, Kuwait and the UAE have all pumped record amounts (or near record amounts) of oil in August, and other OPEC members, Iraq and Iran are ramping up production, too.

At the same time, demand from major oil consumers, China and India, is on the decline, and over all, the IEA has reduced its growth estimates for this year by 100,000 barrels.

Here’s the thing, though.

The IEA is still expecting demand to climb 1.3 million barrels a day this year. And in the future, the IEA’s Matthew Parry Senior Oil Analyst expects demand from poorer countries to increase significantly as demand for automobiles shoots higher.

“We will still see global oil demand growth of somewhere near 1 million barrels per day each year over the next five years,” he told Bloomberg, citing the forecasted growth in gasoline demand from non-OECD countries buying lots of automobiles.

Now that OPEC has toppled (for now) the United States, it will be able to increase its market share.

A long game, indeed, and a risky one at that!

Analysts are predicting that the oil shale industry will bounce back. From Bloomberg:

The drop in U.S. output was mostly driven by a decline in shale oil production, which saw investments slump by 66 percent since 2014, consultants Rystad Energy said in a note on Monday.

Still, a recovery for shale oil could be in sight, according to Rystad. Because of the steep drop in shale investments, the sector saw its break-even price decline to $50 a barrel, which should allow for a faster rebound, the consultants said.

“In terms of economics, shale is very competitive with low break-even prices and the lowest payback years,” Rystad said. “Shale will have the largest growth in investment over the next few years.”

Former breakeven was closer to $55 not that long ago. With crude oil at $45 and change, that’s a number that’s within reach. West Texas Intermediate has traded over $50 a barrel twice in the last year. Take a look at front-month futures over the past year. 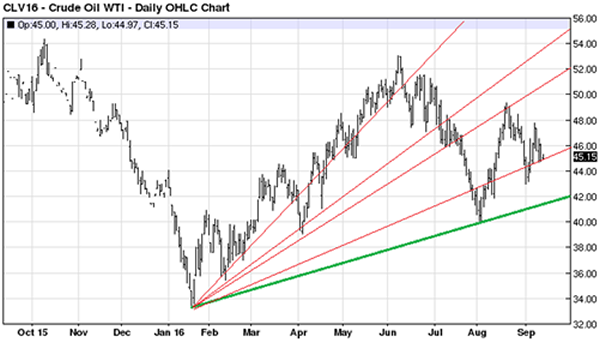 (Note to all the technical analysis folks out there, the red lines aren’t a Fibonacci fan, they are simply trend lines that show when former support turned to resistance.)

Oil prices traded well above $50 a barrel in the third quarter of 2015, and then again in late spring through mid-summer this year. But since topping out above $53 a barrel in June, oil prices have been well off, dropping as low as $40 a barrel in early August.

Then, in a swift move higher, oil prices climbed back above $49, a gain of more than 22.8% in less than three weeks.

Based on the IEA’s recent trimming of demand in the short-term, coupled with the increase in production, my guess is no. And take a look at this… This is the same chart as above, but with one crucial addition: The most recent line of resistance. 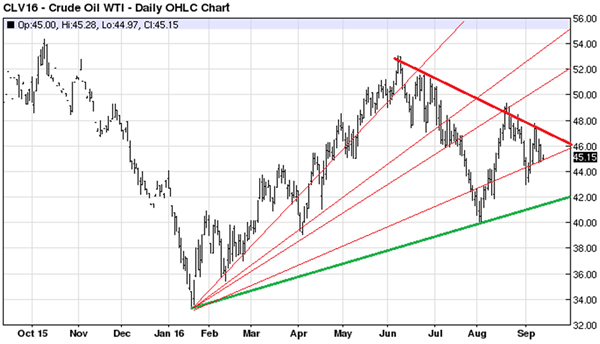 You can clearly see the many times that oil prices attempted to climb past the thick red line, without success. This could be forming a symmetrical triangle pattern. These patterns tend to break out to the upside slightly more than to the downside (54%), so fundamental factors can play a big role in where oil prices are headed.

Symmetrical triangle patterns that break out to the downside could fall 17%. That could push oil prices as low as $37.47. In theory, anyway. That thick green line on the chart has provided exceedingly strong support that has sparked massive moves higher.

My guess is that oil will bounce back and forth between the thick red and green lines through October and into November. That’s when winter demand for heating oil may give oil prices a bump higher.

Here’s the long and the short of it. Immediate supply and demand pressures suggest that oil prices don’t have far to climb, and could in fact pull back over the next two months or so. Long-term demand factors show that increased demand from non-OECD countries could make OPEC’s long game pay off.

By gaining market share, OPEC — and Saudi Arabia in particular — has made itself relevant again.

Risks To Consider: Traders may have the stomach for the upcoming volatility in oil prices, and could play some of the swings back and forth for short-term profits… but it’s risky. The other uncertainty is geopolitical events in the area. There’s always the potential for supply disruptions, which would make predicting oil prices far more difficult.

Action To Take: In the short-term, do nothing. Those investors who can take a bit of risk may consider buying an oil ETF once oil prices pull back and then find support on that bottom green trend line. Current trajectories would put prices at or around $42 a barrel.

The upside potential could be a short-term gain of 10% in about six weeks.

Longer-term investors may use the pull back to take a position to hold through winter, though last year oil prices did not hold their value, as global crude supplies climbed to a record high by the third quarter of 2015.