Oil Price: Look for a Correction

Lately, oil prices have gone up when they should have gone down. In the last week, OPEC decided not to cut production and the two major energy agencies reported that the world over-supply problem is getting worse.  Brent futures increased from $62 to $65. Bad is the new good.

The expected bad news on Friday, June 5 that OPEC would not cut production was skillfully cloaked in positive statements about growing demand. On Monday, June 8, Brent opened at $62.69 and rose to $65.70 over the next two days.

On Tuesday, June 10,  the EIA published its monthly Short-Term Energy Outlook (STEO) that showed that the production surplus responsible for low oil prices had increased in May to almost 3 million barrels per day (bpd). 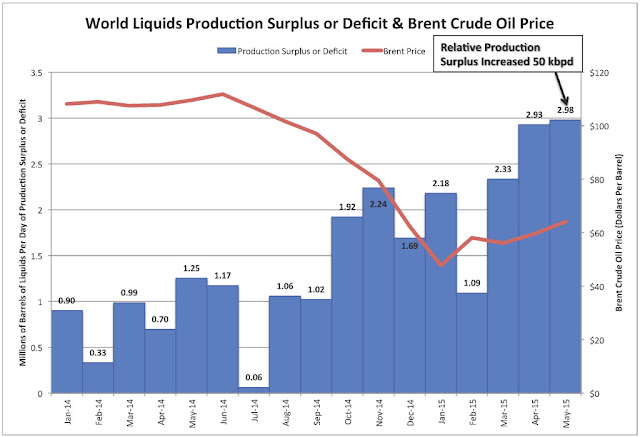 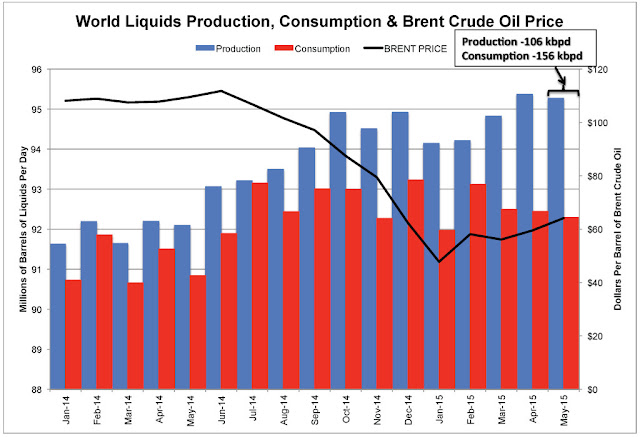 On Thursday, June 11, the IEA came out with its Oil Market Report. The message was the same. The production surplus for the first quarter of 2015 was the highest in a decade at 1.85 million bpd and, obviously, the highest since the oil price crisis began in June of last year (Figure 3). 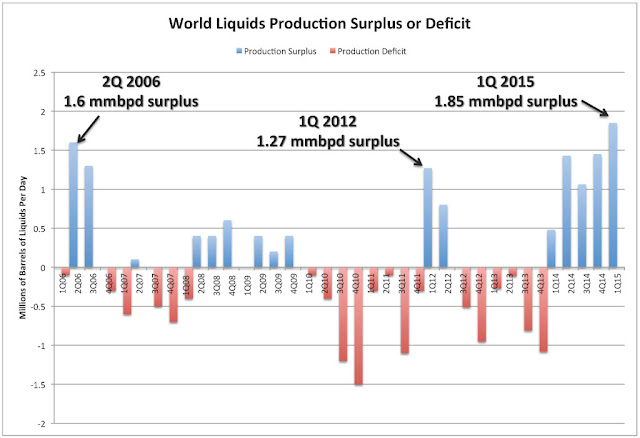 The oil-price crisis occurred because supply (production) exceeded demand (consumption) beginning in the first quarter of 2014 (Figure 4). That situation has persisted. First quarter 2015 supply was about the same as fourth quarter 2014 but demand was lower, not a good thing. 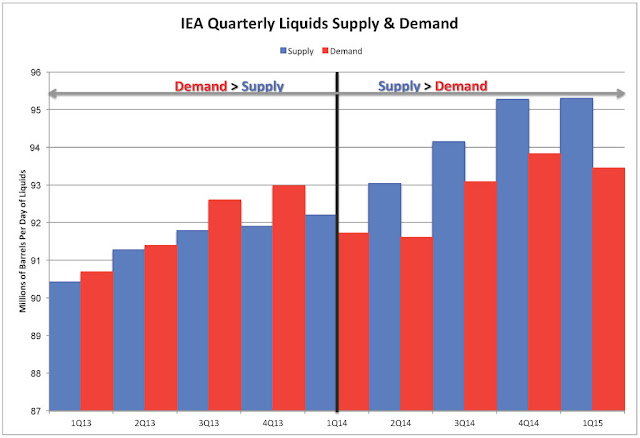 There is optimism about demand but what is that based on? It’s based on increased vehicle miles travelled in the United States. I agree that is a good sign but the U.S. is not the entire world.

There is optimism about decreased U.S. rig counts but U.S. production has increased. The EIA estimates that tight oil production will decline by 91,000 bopd in July but that is more than balanced by new lower Tertiary production in the Gulf of Mexico.

There is optimism because there have been inventory withdrawals in the U.S. but those always occur at this time of year.

I agree with all of this optimism but it is basically well-informed sentiment. The hard data is that we have a production surplus in the world that is getting worse, not better–unless the data from IEA and EIA is somehow unreliable.