Oil and Debt Keep Piling Up at U.S. Shale Sector

EconMatters- June 17, 2015, 4:58 AM EDT
SHARE ON:
The Organization of Petroleum Exporting Countries (OPEC) met on June 5, and it’s clear that the current trends in the global oil market will remain steady. 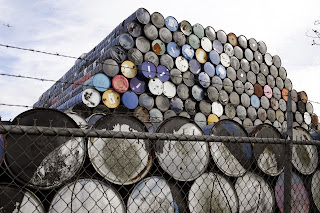 First, OPEC – led by Saudi Arabia – will continue to pump out as much oil as possible. The cartel’s production target of 30 million barrels, with an excess of 31 million barrels actually being pumped, remains.

OPEC did say they would be open to reducing their quota, but only if Russia, the world’s largest producer, cuts back…

Fat chance of that! Russia has never agreed to production cuts, and isn’t showing any flexibility now.

U.S. shale oil producers are also continuing to pump out oil with no sign of stopping. In fact, they stand at the ready to add even more output.

Over the spring, this strategy separated the weak from the strong as supply flourished and prices dropped.

These days, the companies that survived, like EOG Resources (EOG) and Pioneer Natural Resources (PXD), have already given strong indications that they’ll pump more oil if prices hold around $60 per barrel.

Yes, shale firms will be able to turn the taps on again thanks to the seemingly unending flow of capital from Wall Street – banks, institutional investors, and private equity are all lending.

But, another word for at least some of this capital is debt, which may soon catch up with the domestic shale oil producers.

You see, many of these shale companies expanded thanks to debt and, to date, have yet to be disciplined by marketplace forces thanks to more debt and oil price hedges that will soon expire.

Credit analysts at UBS say there are $1.2 trillion outstanding in loans to the U.S. oil industry! A third of this debt is owed by exploration and production companies. And UBS predicts the default rate on these loans could end up being in the low-teens.

The latest survey of bank loan officers by the Federal Reserve found there is a higher expectation that shale firms will have trouble meeting the terms of the loans. The survey also found that banks were cutting credit lines to energy companies and asking shale firms for more collateral.

But, judging by the stock performances of most of the companies involved, everything is great.

Why has nothing happened yet?

The answer is hedges. Many shale oil firms hedged their production this year.

Chesapeake Energy (CHK), for example, will have $1.2 billion added to its cash flow this year thanks to hedges on its production.

But this protection declines and even disappears entirely in 2016 for some companies, leaving them wide open to finally be hurt by low oil and gas prices.

Plus, companies can’t add any more hedges at this late date because, in most cases, it would be too costly.

Maybe that’s why companies targeted by David Einhorn as vulnerable, such as EOG and Pioneer, are so anxious to increase their production as soon as possible. They need to generate cash.

Making the Best of What’s Left

The growing flows of oil from OPEC and the United States likely mean that prices are capped in the $60 to $65 range for the foreseeable future.

Prominent voices like the Energy Minister of Russia, Alexander Novak, and the head of BP, Bob Dudley, have both said as much.

Even OPEC said that oil will remain below $100 per barrel for the next decade, and may again be as low as $40 per barrel at some point in the next 10 years.

That’s not good news for some shale producers.

When the capital dries up and companies are left with low prices, many will disappear a la the tech and telecom bust at the turn of the century.

But the survivors will emerge even stronger.

The lesson here is to check out the debt levels and cash flows of any shale company before investing.