NXP Semiconductors NV (NASDAQ:NXPI) is a provider of high performance mixed signal and standard product solutions for radio frequency (RF), analog, power management, interface, security, and digital processing worldwide. The company is based in the Netherlands and was spun-off from Philips.

There are currently four mega trends driving the electronics industry and helping shape our society: 1) Energy Efficiency, 2) Connected Devices, 3) Security, and 4) Health. NXP’s company motto is “Secure Connections for a Smarter World.” The company creates solutions for the Connected Car, Cyber Security, Portable and Wearable Devices, and the Internet of Things.

Some of NXP’s largest OEM customers are names that should sound familiar, like Apple Inc.(NASDAQ:AAPL), Bosch, Continental, Delphi, and Samsung. NXP scored a big win a few months ago when Apple decided to use NXP’s chips to power its new Apple Pay system. Two NXP chips enable payments and also secures them. Its chips are also rumored to be in the iWatch.

NXP is one of the first companies to mass-produce chips for vehicle-to-vehicle and vehicle-to-infrastructure communication systems. These chips may one day enable truly “smart” vehicles that avoid vehicle collisions.

On March 2, the company announced it was merging with Austin-based Freescale Semiconductor (NYSE:FSL) in a $40 billion deal. The combined company will become the 4th largest semiconductor company. Most analysts and investors appear pretty positive about the merger given the low integration risk and the complimentary nature of the two business portfolios. Both companies traded higher on the announcement: NXP rose more than 17% and Freescale climbed almost 12%. 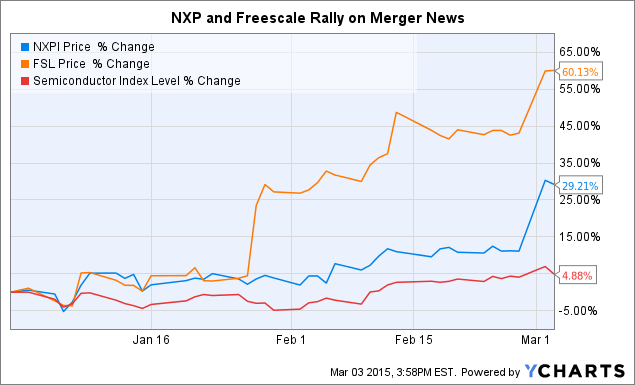 Freescale derives half of its revenues from the automotive industry. Chip content in cars is a growth business and given the highly regulated nature of the industry, there are huge barriers to entry. So the marriage of NXP and Freescale, two connected car specialists, makes a lot of sense, creating an automotive powerhouse and the world’s largest automotive semi supplier.

The deal is not a total surprise as ex-Motorola unit Freescale Semiconductor had hired an investment banker to explore a possible sale of the company. As recently as last month, Bloomberg was reporting that Samsung was another suitor. But alas, Samsung has yet to spend its $63 billion cash hoard.

Together NXP and Freescale will be a formidable competitor in the automotive and industrial space. Automotive in particular is attractive given all the new chip content going into “smart” vehicles making them computers on wheels.

Tech research firm Gartner, estimates that each new car sold last year contained about $334 of semiconductors, up from $223 in 2001. By 2018, it projects that total will reach $368 a car. And OEM customers would rather deal with a fewer number of suppliers.

With Apple working on the Apple iWatch and rumored to be possibly interested in working on an Apple car, the merged NXP-Freescale combo could become an important supply partner supporting those efforts.

So with all these things going for it, it’s no wonder than NXP Semiconductors has been a performance winner YTD. But how does it look going forward? 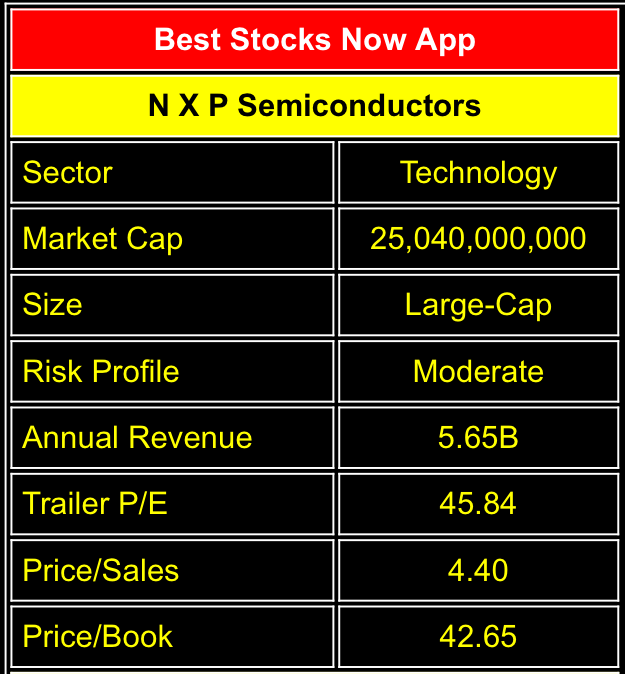 NXP Semiconductors is a Large Cap technology stock with a market cap of $25 billion and a Moderate risk profile. It has a trailing P/E of 46 times earnings and a forward P/E of 15. 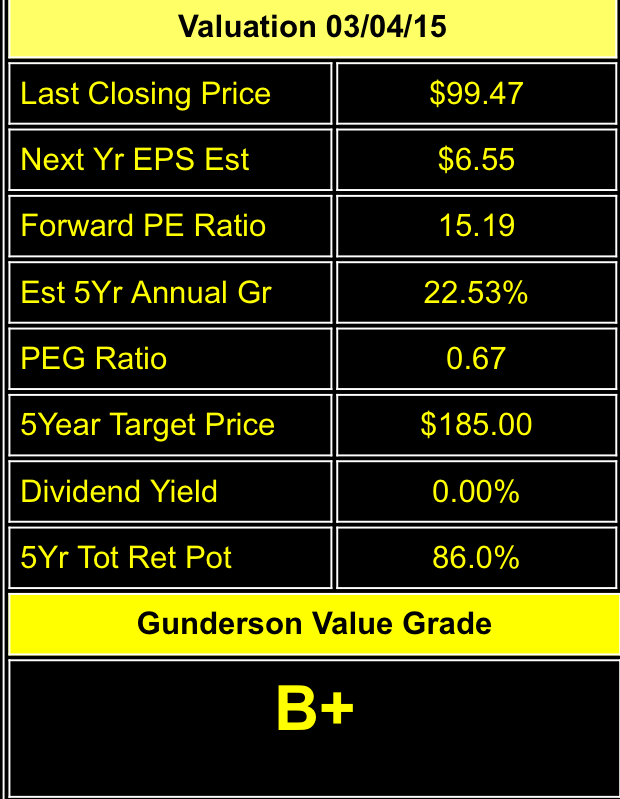 So NXP’s valuation is not cheap, particularly for a semiconductor stock. As a result it receives a Valuation Grade of B+. However, this is a growth stock in a transformational area of technology. Its 5-year annual growth rate is more than 22.5%. On a P/E to Growth basis is still an attractive .67. 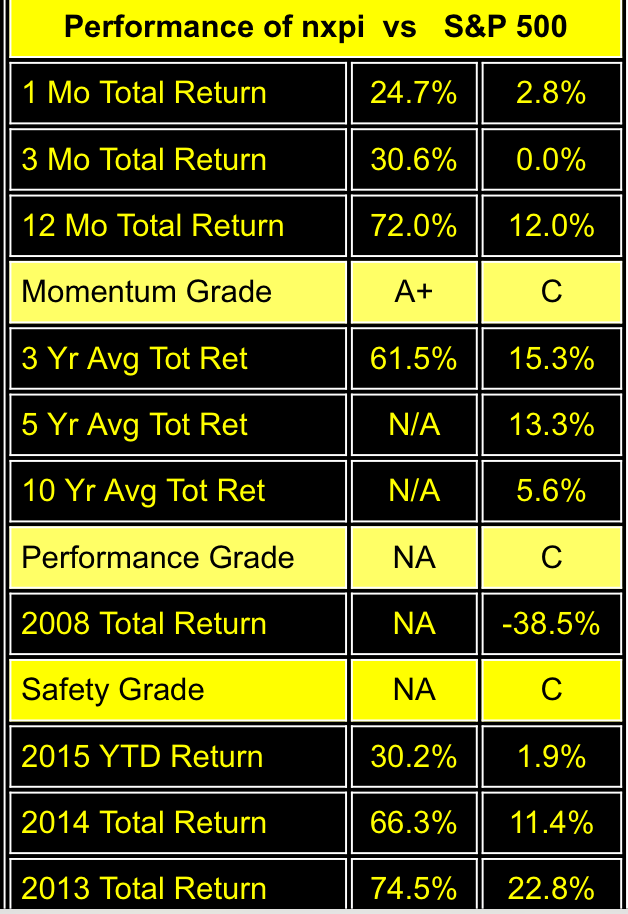 Last year, NXP Semiconductors was up an impressive 66%. This year, the stock is up another 30%. It has a Momentum Grade of A+ and it clearly has been a big market winner! 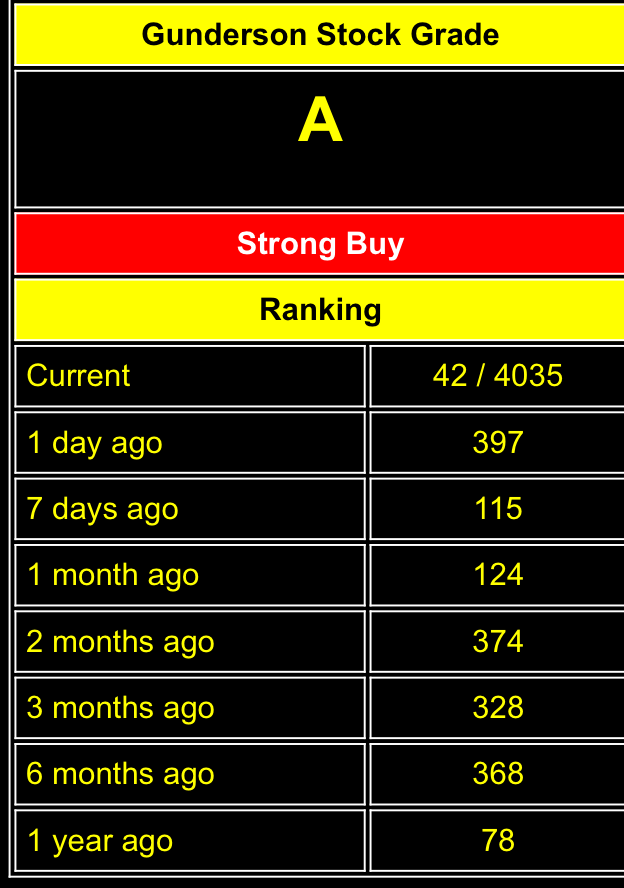 NXP Semiconductors is ranked a Strong Buy with a Stock Grade of A. The stock is ranked #42 out of the 3900+ stocks in the Best Stocks Now universe. The proposed combo of NXP and Freescale is looking pretty attractive. I am sure the combo-company is also looking pretty attractive to Apple as a key supplier of choice going forward. I am long the stock and also like it as a play on the strong dollar/weak euro.