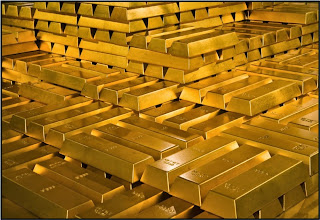 The price of gold is essentially unchanged from where it finished last year.  There have been several interesting developments.  Of particular note, China, India and Russia were significant buyers last month.
It appears that the UK exported gold to Switzerland where it was refined and then shipped to China and India.  Russia continues to accumulate gold even as its hard currency reserves fall.
According to official Swiss data, its shipments of gold to China almost doubled in March from February to 46.4 metric tonnes.  Swiss exports of gold to India doubled to a four month high of 72.5 metric tonnes.  On the other hand, Swiss gold exports to Hong Kong fell by about a quarter to 30  metric tonnes in March.
Overall Swiss exports of gold, which are not sensitive to the strength of the Swiss franc, rose 65% in March to 223.3 metric tonnes.  This is the highest in at least two years.  Imports rose 51% to 281.6 metric tonnes, which is a new high since the time series began.  Imports from the UK jumped six-fold to 97.2  metric tonnes.
Russia bought about 31.1 metric tonnes of gold in March.  This is about three times more than Russia typically has been buying recently.  However, purchases slowed in January and February.  The purchases in March seemed to be a “catch-up” as if Russia gold purchases are on a planned program.
Russia’s gold accumulation has more than doubled its holdings since the middle of 2009 and tripled them since 2005.   Russia’s gold holdings amount to 1.2k metric tonnes of gold.  It is the fifth largest national holding behind the US (8.1k tonnes), Germany (3.4k tonnes), Italy (2.5k tonnes), France (2.4k tonnes). Russia’s gold holdings have risen over the last couple of years, as its overall reserves have fallen.
Gold accounts for almost 15% of Russia’s reserves.  Major industrialized countries have low levels of reserves relative to trade and capital flows.  Their gold holdings are relatively large.  Official gold holdings account for nearly three-quarters of US reserves.  German official gold holdings are nearly 69% of its reserves.  Italian and French holdings are proportionately a little smaller than Germany’s.  China’s gold holdings may be about 1% of its reserves, which says more about its large reserves than it does about its gold.
Russia appears to hold a 100 tonnes more than China though there are suspicions that China’s holdings may be under reported.  Indeed, the PBOC has not updated its official holdings since 2009.   There is some speculation that it may have more than doubled its holdings since its last update.   The cloak of secrecy may be lifted if China wants to bolster its case for being included in the SDR.  We have previously made a similar point about the currency allocation of its currency reserves.  The IMF will hold meetings next month about the SDR and a final decision will be made in early Q4.
India holds about 558 metrics tonnes of monetary gold.  It accounts for about 7% of its reserves.  It also has an estimated 20.6k metric tonnes of gold in private hands and another 10% more in Hindu temples.  India’s gold imports account for nearly a third of its trade deficit.  The Indian government is wrestling with ways to tap into the large private sector gold holdings.  Next month it is expected to announce new initiatives, such as allowing gold deposits at banks with fixed interest rates, the sale of gold bonds and gold coins.
The IMF’s data indicate that world’s currency reserves were valued at $11.6 trillion at the end of 2014.  The gold market is far too small to replace even a significant part of the paper money.  A couple of years ago, a senior PBOC official acknowledged this by indicating that China could only invest 2% of its foreign exchange holdings in gold because of the size of the gold market.  Only Russia, where reserve holdings are falling appears to be really diversifying away from paper money.  This is more politically motivated than economic.  The opportunity cost in the low interest rate world is marginal.  This will change if/when rates rise.
Research Report
analyst ratings
blogger opinions
investor sentiment
news sentiment
analyst ratings
insider activity
hedge funds
stats charts
You May Also Like