Much has been made of famous short-side investor David Einhorn’s anti-fracking presentation that primarily targeted Pioneer Natural Resources (NYSE:PXD) — which he calls “The MotherFracker” — and caused shares in the company to fall over 8% last week. At its core, the presentation recognizes Pioneer as a cash burner without growth. While I make no pretensions towards detesting his thesis insofar as Pioneer is concerned, investors are making the mistake of punishing the entire lot of unconventional oil drillers equally despite some being almost antithetical to Pioneer’s cash burning methods.

One such company that shines bright is Northern Oil & Gas, Inc. (NYSEMKT:NOG). Partially due to posting an Earnings-Per-Share miss and a revenue miss on Friday and partially due to the market’s reaction to Einhorn’s presentation, shares in Northern Oil and Gas fell almost 15% last week to $7.47 per share, meaning it now trades at just 2.77 times trailing earnings and at .61 times its book value. At these levels I am adding it to the “Our Picks” section because of its low break-even level in comparison to peers, the diversification in its non-operator model, vast acreage hold in the Williston Basin, and its increasing proved reserves coupled with a strongly hedged position.

Being a non-operator means that the company does not participate in the drilling and completion of wells; instead, it “acquires non-operated positions in high quality acreage about to be drilled, that provide for high internal rates of return on capital” and “partners with leading E&P operators with a successful track record in the Williston Basin.” This position also allows the company to be disciplined in focusing only on the highest producing areas, as noted by CEO Mike Reger on Friday:

“We took a hard look at the returns associated with our wells in process as oil prices began to fall. Northern exited 2014 with a significant number of wells in process and some of those wells no longer had an acceptable rate of return at these lower oil prices. Of the roughly 23 net wells in process at the end of the year, we were able to eliminate nearly seven net wells by reversing our prior consent decisions or assigning the well bores back to the operator, thereby strategically capitalizing on our non-op flexibility.”

As the company’s website states above, Northern does not conduct any of the fracturing, drilling, or completion activities itself. Although some view this as a negative as the company can be subjected to the whims of the oil cycle (since partners will cut drilling activity), the non-operator status has allowed Northern Oil and Gas to obtain massive areas of acreage without the added expenses of drilling and fracturing.

Investors may be understandably fearful of Northern’s partners cutting capital expenditures, but part of this decline has been offset by increased efficiencies and decreases in production costs, as recognized by Reger in Friday’s conference call, “Our operating partners have reduced their capital spending by 50% to 80% from 2014 levels which we believe will result in a very healthy reset for the Williston Basin. Average drilling and completion costs are falling and will likely settle in at or below 7 million to 7.5 million per well by the end of this year, a 20% or greater reduction from the cost we experienced in 2014.”

Northern is also well diversified as no operator accounts for more than 21.5% of Northern’s PDP (Proved Developed Producing reserves); to this end, Slawson Exploration and Continental Resources are the two largest of the company’s operators, representing 21.5 and 10.8% of activity, respectively.

The acreage Northern holds in the Williston Basin (primarily in western North Dakota and eastern Montana) has continued to yield growing proved reserves; the famed Bakken shale is underneath the basin, and the Three Forks formation finds its home beneath the Bakken. As noted on the United States Geological Survey’s website, this area is home to far more reserves than originally believed:

Northern Oil and Gas is arguably the best positioned company to capitalize off this deluge of resources beneath the Earth’s surface; the company controls 185,000 acres in the area and its costs standout as low in comparison to peers. As aforementioned, Northern is decreasing capital expenditures but still keeping production flat (guidance for production remained unchanged in the company’s earnings call) due to lower drilling costs and an increased focus on investing in only the highest yielding wells. The image below, taken from an April presentation at the IPAA Oil and Gas Investment Symposium, depicts just how well the company is lowering its expenditures without sacrificing production. 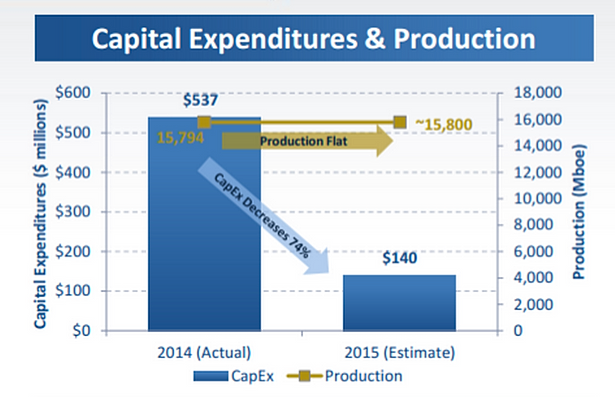 That being said, those who read my article on Integrated Oil Companies know that I am rather cautious when investing in energy companies in this environment. Simply put, many Exploration and Production companies are excessively leveraged and too subjected to the depressed energy prices to be worth the investment risk. I noted that

“Even with cheap valuations, it is not a time to be greedy with others fearful — oil could stay in the forty to fifty dollar range for a considerable amount of time, and many companies carry additional risk — or throw money at oil exchange-traded funds; instead, it is a time to be greedy wisely, finding a company worth holding for ten years that can persist regardless of the oil environment.”

This is similar to what Einhorn noted in regards to Pioneer and some other frackers (it’s worth adding that I remain bullish on oil and my cautionary caveat above comes from a risk management standpoint), but Northern Oil and Gas actually fits the above description as its acreage will remain lucrative for years to come.

Northern Oil and Gas differentiates itself from other tight oil plays such as Emerald Oil Inc (NYSEMKT:EOX) as their wells have a break-even point below 50 dollars a barrel, and their positions are appropriately hedged for the next year, as detailed by the graphic below. Furthermore, their unit costs per barrel of oil equivalent are amongst the lowest of all unconventional producers at $20.29. Aided by hedged positions and decreasing costs, Northern can maintain their high cash operating margins. 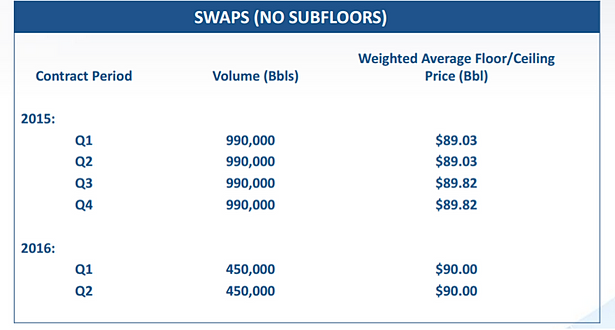 Continued upwards commodity price movement will only further fuel Northern’s revenues. In regards to production in the Bakken, growing production this summer as a result of companies needing to avoid losing their leases by drilling; the well-hedged Northern Oil and Gas is ready for this trend regardless of energy prices. Their proved reserves are growing at an outstanding rate, with an estimated 100.7 million barrels of oil equivalent proven reserves at the end of 2014. As production in the Williston Basin remains constant (or grows, as I suggested it will) and supported by now-growing oil prices I expect Northern Oil and Gas to emerge as the latter portion of the shale revolution’s biggest champion.

None of this is to say that companies that focus on tight oil are not without their added risks, and it certainly is not to say that Einhorn’s thesis concerning Pioneer is entirely flawed. Instead, it suggests that not all fracking-oriented companies are doomed and Northern Oil and Gas’s discipline in investing in wells and non-operator status make it well-positioned to emerge from the storm as a winner.