James “Jim” Flynn first walked onto the Deerfield Management team seventeen years ago, since a firm that cares about strides in the healthcare sector, all while marrying financial assets with prospects in the market. Having co-managed Deerfield with founder Arnold Snider for a year before assuming the captain role of all investment activity in 2005, Flynn has gained clear insight into the pharma world. For the second quarter, under Flynn’s command of Deerfield, Valeant Pharmaceuticals Intl Inc (NYSE:VRX) and Genocea Biosciences Inc (NASDAQ:GNCA) simply do not make the cut anymore, both getting axed. However, one biotech player has risen to the plate, with MannKind Corporation (NASDAQ:MNKD) suddenly gaining Flynn’s sharply healthcare-minded favor.

This hedge fund manager is no stranger to the name of the trading game, having achieved a reputation as a top-ranking analyst at Furman Selz between 1996 and 2000, and having served as a senior analyst long before at Kidder, Peabody, & Co. in the late ’80s to early 90’s. If “Jim” Flynn knows any field like the back of his hand, his expertise points to the specialty pharma industry. The New York Academy of Medicine for this reason trusts Flynn’s wise words on the Board of Trustees of the New York Academy. It helps that the guru has a Bachelor’s of Science in Cellular and Molecular Biology and Economics from the University of Michigan under his belt to guide his biotech moves toward successful gains.

Did Flynn’s healthcare knowledge make a killing in market earnings with his pull-backs in Valeant and Genocea, but a new confident wager on MannKind?

Is new Valeant CEO Joe Papa doing enough to sway the favor of the Street? From where Flynn is standing, it appears that answer is a loud no, as Deerfield’s Managing Partner led the hedge fund firm to eject every last one of 1,500,000 shares in the troubled biotech giant, withdrawing to the harsh tune of $16,545,000 in the latest quarter.

How do other voices on Wall Street sound off on a tale of a biotech giant entrenched in drama?

Deutsche Bank analyst Gregg Gilbert may be sidelined on this troubled healthcare player, but he nonetheless spots meaningful upside potential for the stock, reiterating a Neutral rating on VRX stock with a price target of $19, which represents a 32% increase from where the shares last closed. (To watch Gilbert’s track record, click here)

Interestingly, though Gilbert believes Valeant could hook onto growth prospects that help yield a turnaround past next year, he likewise is reigning in expectations for the short-term, until the giant’s turnaround proves stronger: “We updated our model to reflect a more conservative view on 2018; we now assume more significant erosion for Dermatology and more modest growth for Salix. Our 2018 estimates are well below consensus, which we believe may not be factoring in the full-year impact from 2017 divestitures or anticipated LOEs. We acknowledge that there are numerous swing factors that could influence 2018 revenue. We continue to see the potential for solid growth beyond 2018, which represents a trough year in our model. While our target implies material upside, we are sticking with our Hold rating pending greater visibility on Xifaxan demand trends, the Siliq launch, stabilization of the Dermatology business, and further steps to strengthen the balance sheet.”

Conversely, CNBC’s Jim Cramer may give the new Valeant CEO kudos for his turnaround efforts, but ultimately, this does not sway him away from the bears. From Cramer’s eyes, he just has no room for this kind of gamble right now: “We’re going to just say, ‘Don’t buy.’ We like everything that [CEO] Joe Papa’s doing. He’s cleaned up the balance sheet. I think the thing could be OK. But I’ve still got so many drug companies that are down on their luck right now, I can’t go for that one.”

Wall Street is tied up in knots on this troubled biotech giant when it comes to deciding whether it is time to flee the coop or root for the comeback. TipRanks analytics demonstrate VRX as a Hold. Based on 13 analysts polled by TipRanks in the last 3 months, 3 rate a Buy on Valeant stock, 7 maintain a Hold, while 3 issue a Sell. The 12-month average price target stands at $17.83, marking a nearly 24% upside from where the stock is currently trading.

Deerfield Knocks Out All of Genocea in the Nick of Time

Deerfield side stepped a landmine when Flynn led the hedge fund firm to nix all 479,000 shares in Genocea, selling $2,917,000 just in time for a sharp second quarter play. Why has this biotech firm become a sudden baited trap for investors?

In a turn of immune-oncology events, the drug maker lost almost 77% of its value overnight from Monday to Tuesday, when its revealed transition to developing neoantigen cancer vaccines of the likes of its lead asset GEN-009 likewise means the end of GEN-003 expenses and activities- and a sad adieu to 40% of the firm’s workforce. With job slashes in tow, Genocea is likely to lose out on $1.1 million in expenses, with merely 55 employees left in the wreckage.

As far as the company is concerned, they are trying to put a positive spin on what has caused some serious investor apprehension, explaining that they care about “exploring strategic alternatives” for GEN-003, its investigational immunotherapy designed to treat genital herpes, which was primed for a Phase 3 trial.

The biggest spotlight now points to GEN-009, which Genocea has plans for filing an Investigational New Drug (IND) application by the beginning of next year. GNCA’s undertaking for the drug intends to kick off a Phase I clinical trial evaluating a scope of different tumors throughout the opening half of next year, anticipating a release of initial immunogenicity data by the beginning half of 2019. Moving forward, the drug maker’s hopes rest on this adjuvanted peptide vaccine, with GEN-009 created to guide T cells to attack a patient’s tumor.

Genocea president and CEO Chip Clark asserts, “With our research and development efforts now focused entirely on neoantigen cancer vaccines, we believe the power of ATLAS to identify the right vaccine antigens, combined with our vaccinology expertise, gives us the opportunity to create value for our shareholders by developing best-in-class vaccines for cancer patients and achieving leadership in this exciting field.”

“To our teammates who’ve given so much to advance GEN-003, we offer our profound thanks for their dedication. Due to their efforts, GEN-003 has the potential to serve as a cornerstone treatment for genital herpes infections. We see this strategic process, which is already underway, as the best way to drive to commercial launch of and maximize shareholder value from GEN-003,” Clark explains- but to no avail, as right now, investors have been left dismayed and quaking in the wake of this “strategic process.” Right now, it looks like Flynn’s exit was spot-on.

Wall Street is far less bearish than the hedge fund whiz, considering TipRanks analytics exhibit GNCA as a Buy. Out of 3 analysts polled by TipRanks in the last 3 months, 1 is bullish on Genocea stock while 2 remain sidelined. With a return potential of 740%, the stock’s consensus target price stands at $10.00.

MannKind is a lucky biotech player, as Deerfield rather than running away is choosing to step right in, initiating a stake of 2,702,403 shares worth $3,810,000. It looks like Flynn’s hedge fund firm struck it rich here, as after this golden second quarter bet has already seen shares gain 28% in value. The biotech firm is attracting a great deal of attention on the Street thanks to its compelling lead asset: inhalable insulin Afrezza, the fastest-acting insulin option on the market.

Afrezza has a one-two punch that makes it such a beneficial insulin choice, making it easier to manage blood sugar while also giving patients an upgraded quality of life. With a global injectable insulin market that circles up to a whopping $30 billion, it is easy to see why so many key investors are turning up in this drug maker’s court.

It does not hurt that MannKind’s second quarter saw billionaire expert on all things Wall Street Israel “Izzy” Englander step up his position with a solid 744,532 share addition, taking the holding up to 822,192 shares worth $1,159,000.

Meanwhile, Maxim analyst Jason Kolbert likewise joined the bulls in the second quarter on the firm’s prospects, seeing substantial upside for those willing to back MannKind.

Eying a transformative gamechanger in Afrezza for the diabetes market, the analyst rates a Buy on MannKind stock with a $4 price target, which represents a 116% increase from where the stock is currently trading. (To watch Kolbert’s track record, click here)

Kolbert anticipates that thanks to an improved team of management guiding MannKind’s commercial efforts, MannKind is primed for the kind of comeback that could be the key to unbolting shareholder value.

However, other Wall Street voices are far less enthusiastic on MannKind’s opportunity to capture market share. According to TipRanks, Cory Kasimov of J.P. Morgan rates an Underweight rating on MannKind stock without listing a price target and Joshua Schimmer of Evercore ISI rates an Underweight rating on MannKind stock with a $0.54 price target, which implies a nearly 71% downside from where the shares last closed. 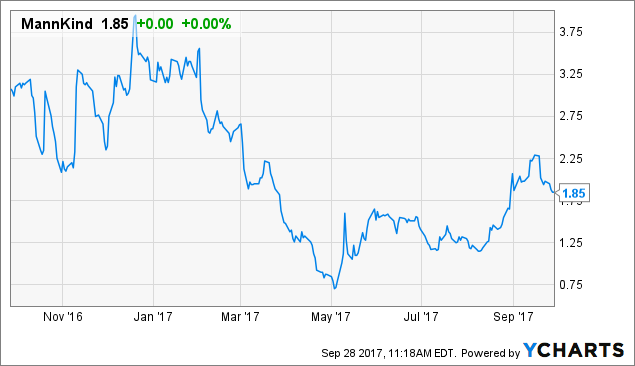