Netflix, Inc. (NASDAQ:NFLX) has been a remarkable company.  Because it has accomplished something almost no company has ever done.  It changed its business model, leading to new growth and higher profits.

Almost nobody pulls that off, because they remain stuck defending and extending their old model until they become irrelevant, or fail.  Think about Blackberry, that gave us the smartphone business then lost it to Apple and its creation of the app market.  Consider Circuit City, that lost enough customers to Amazon it could no longer survive.  Sun Microsystems disappeared after PC servers caught up to Unix servers in capability. Remember the Bell companies and their land-line and long distance services, made obsolete by mobile phones and cable operators?  These were some really big companies that saw their market shifts, but failed to “pivot” their strategy to remain competitive.

Netflix built a tremendous business delivering physical videos on tape and CD to homes, wiping out the brick-and-mortar stores like Blockbuster and Hollywood Video.  By 2008 Netflix reached $1B revenues, reducing Blockbuster by a like amount.  By 2010 Blockbuster was bankrupt.  Netflix’ share price soared from $50/share to almost $300/share during 2011.  By the end of 2012 CD shipments were dropping precipitously as streaming viewership was exploding.  People thought Netflix was missing the wave, and the stock plummeted 75%. Most folks thought Netflix couldn’t pivot fast enough, or profitably, either.

But in 2013 Netflix proved the analysts wrong, and the company built a very successful – in fact market leading – streaming business.  The shares soared, recovering all that lost value.  By 2015 the company had more than doubled its previous high valuation.

But Netflix may be breaking entirely new ground in 2016.  It is becoming a market leader in original programming.  Something we long attributed to broadcasters and/or cable distributors like HBO and Showtime. 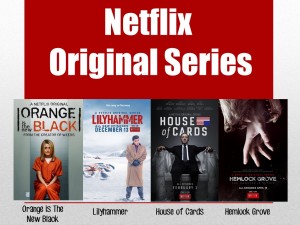 These days most of those hours are filled with sports – think evening games of football, basketball, baseball including playoffs and “March Madness” events.  Sports are far cheaper to program, and can fill a lot of hours.  Next think reality programming.  Showing people race across countries, or compete to survive a political battlefield on an island, or even dancing or dieting, uses no expensive actors or directors or sets.  It is far, far less expensive than writing, casting, shooting and programming a drama (likeBlacklist) or comedy (like Big Bang Theory.)  Plan on showing every show twice in reruns, plus intermixing with the sports and reality shows, and most networks get away with around 200-250 hours of original programming per year.

Against that backdrop, Netflix has announced it will program 600 hours of original programming this year.  That will approximately double any single large broadcast network.  In a very real way, if you don’t want to watch sports or reality TV any more you probably will be watching some kind of “on demand” program.  Either streamed from a cable service, or from a provider such as Netflix, Hulu or Amazon.

When it comes to original programming, the old broadcast networks are losing their relevancy to streaming technology, personal video devices and the customer’s ability to find what they want, when they want it – and increasingly at a quality they prefer – from streaming as opposed to broadcast media.

To complete this latest “pivot,” from a video streaming company to a true media company with its own content, Morgan Stanley has published that Netflix is now considered by customers as the #1 quality programming across streaming services.  29% of viewers said Netflix was #1, followed by long-time winner HBO now #2 with 21% of customers saying their programming is best.  Amazon, Showtime and Hulu were seen as the best quality by 4%-5% of viewers.

So a decade ago Netflix was a CD distribution company.  The largest customer of the U.S. Postal Service. Signing up folks to watch physical videos in their homes.  Now they are the largest data streaming company on the planet, and one of the largest original programming producers and programmers in the USA – and possibly the world.  And in this same decade we’ve watched the network broadcast companies become outlets for sports and reality TV, while cutting far back on their original shows.  Sounds a lot like a market shift, and possibly Netflix could be the game changer, as it performs the first strategy double pivot in business history.