Last Friday we finally got confirmation of where all the natural gas supply has been coming from as Cabot Oil & Gas Corporation (NYSE:COG) reported its earnings. Just like Chesapeake Energy Corporation (NYSE:CHK), they reduced natural gas output, but on a much grander scale. CHK has yet to report and will do so on May 6th providing even more color on the subject.

Last month they announced a 2% reduction in NGAS volumes to 1-3% for 2015 vs. 3-5%. But the ramp up of supply from Marcellus, and to a lesser extent Utica, and a corresponding flat to up rig count in natural gas rigs in those areas appears to be the reason why NGAS has crashed some 30% despite a relatively cold winter in the mid-west and East especially. The magnitude of the supply increase is simply stunning, begging the question: what was Cabot’s management thinking by increasing NGAS production in Marcellus by some 40% to 162 BCF in 1Q15 and up 12.5% sequentially from 4Q14? And, to boot, 4Q14 was up over 13% sequentially from 3Q14! 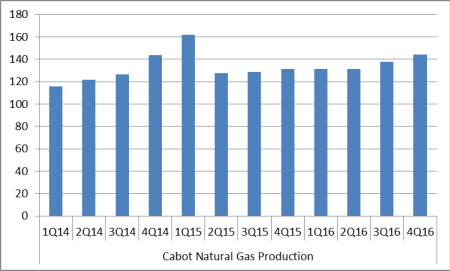 The Marcellus region began ramping up in 2010 which has resulted in a surge in production which has probably peaked 1Q15 in terms of rate of growth. It has by far contributed to the largest increases in output and has signal handily resulted in the crash in prices.

With spot prices hovering around $2.45/MMBTU and within 10% of the most bearish estimate targets this quarter, it seems the worst of the oversupply is behind the market especially with EPA rules forcing coal to NGAS switching in volume this summer. Coal still represents the majority of fuel used to generate electricity despite this trend.

The cut backs in production growth and higher demand will eventually balance the market which, mind you, is not that out of balance. We are still 6% or so below the 5 year storage average, but the short sightedness of traders, as was the case in oil markets, appears to have repeated again in the NGAS markets as both react to short term signals vs. discounting the fundamentals to come.

We are not forecasting a bull market in natural gas by any means but on top of what was already mentioned, LNG and gas exports are rising; especially Mexican NGAS which will further tighten the market. Since traders work on what is incremental, with supply waning and demand increasing sentiment should soon reverse and prices should rise over $3.00 in 2H15. Just like in oil, NGAS prices have overshot and practically all incremental new wells ex NE are not profitable at current spot or, if they are IRRs, are under 20%.

Producers are no longer receiving NGL subsidies from high prices in areas like Eagle Ford to justify new drilling as NGL prices hover in mid-teens. One thing to watch for is the rise of oil above $60 which will open the threat to more oil coming, thus reopening the potential for more NGAS supply as a byproduct. However with futures markets net short in terms of open contracts it won’t be long that short term traders will sense the tide is turning.