Nai or Oxi on the Greek Referendum?

Greece missed a €1.6bn (£1.1bn) payment to the International Monetary Fund (IMF). The country’s current bailout then expired on Tuesday. On Sunday, Greece will vote on a landmark referendum: “Yes” or “No” (“Nai” or “Oxi” in Greek) to the new bail out package currently on the table from the creditor.

Sunday’s vote will be watched closely around the world, and the prospect of a falling Greece, which is a member of the Euro bloc and NATO, has alarmed policymakers from Brussels to Washington.
Oxi Means Grexit

“…. new elections would be necessary if the Greek people vote for the reform programme and thus for remaining in the eurozone and Tsipras, as a logical consequence, resigns.”

The time between the departure of Tsipras’ hard-left Syriza party and new elections would have to “be bridged with a technocratic government, so that we can continue to negotiate,” Schulz was quoted as saying.

Guardian reported German Finance Minister Wolfgang Schaeuble told the Bild newspaper that the choice on Sunday was between holding on to the euro and being “temporarily without it”. So it seems as far as the Euro Zone is concerned, a No vote essentially means Greece would be forced out of the euro bloc. Key Events TimelineBelow is the timeline of future key events illustrated by Bloomberg: 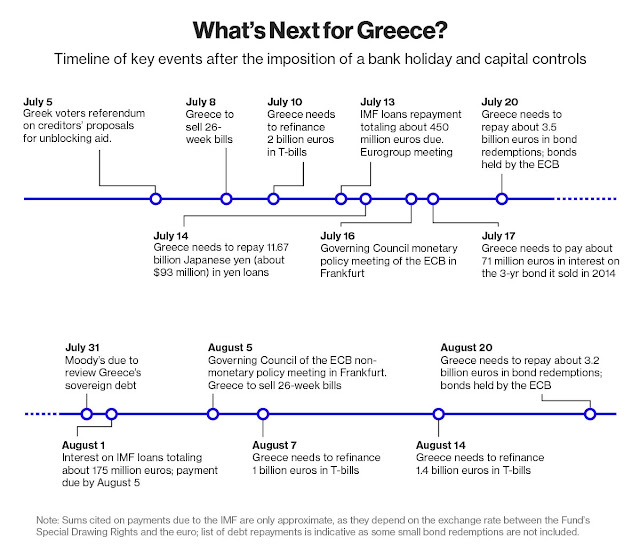 6 Oxi Bullet Points by Yanis Varoufakis
The government has urged a “No” vote saying it’d give more leverage leading to better deal.  Below is a 6-bullet-point outline by Yanis Varoufakis, Finance Minister of Greece why a NO vote in the referendum is recommended:

Greece in Serious DepressionGreece GDP has shrunk by 25% in six years. Unemployment stood at 25% in March, while one in two youngsters under the age of 25 is without a job, and 3% of the population has left since 2010. A Grexit would only compound the economic depression the country is already suffering.

The above 6-point outline suggests even the Syriza party knows the country needs to stay in the Euro Zone.  I see this as Tsipras and his hard-left Syriza party are trying to make a political statement and make this out to be a David-vs.-Goliath event (and to save their jobs).

The undisputed fact remains that Greece has had a totally out-of-control spending, and a totally mis-managed country finance.  The country is running out of options to face the music that’s in the making for a long time to come.

For all the hype about how Greece has other financing options like China and/or Russia, the fact remains bailing out Greece is a bad and risky investment.  I personally can’t wait to see a negotiation showdown between Tsipras, Putin or Xi, or perhaps that Crowdfunding for Greece would bail out Greece, in this life time.

Like the old saying goes — Beggars Cannot Be Choosers.  There comes a time you can’t have the cake and eat it too.  It is time for Greece to move on, take the responsibility, and find a way to regain its footing.