Many high-yield oil and gas Master Limited Partnerships had a difficult time sustaining their dividend payouts in 2016.

The collapse in oil and gas prices caused their cash flow to dry up, which left little cash available for dividends. With high levels of debt across the asset class, many MLPs cut or eliminated their payouts last year.

However, not only did Genesis Energy, L.P. (NYSE:GEL) maintain its distribution—which currently yields more than 7%–it has raised its dividend for 46 consecutive quarters.

Genesis Energy is a rare MLP that qualifies as a Dividend Achiever, a group of 272 stocks with 10+ years of consecutive dividend increases.

This article will discuss Genesis Energy’s successful business model, and whether the company is likely to continue its dividend growth streak in 2017. 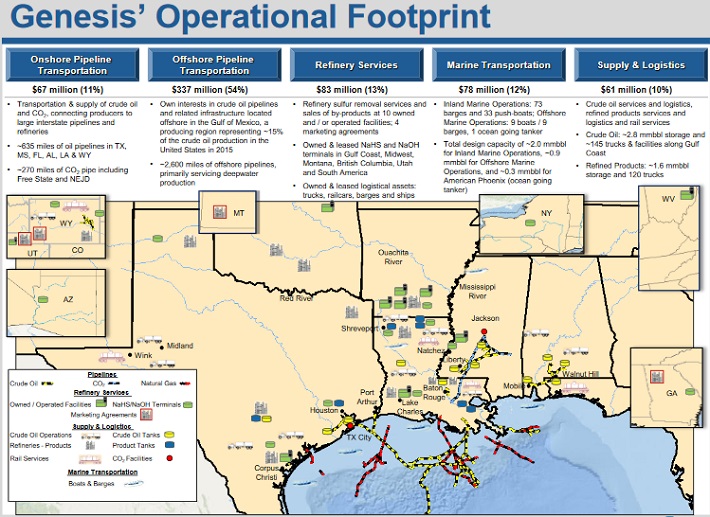 The company has total storage capacity for more than 3 million barrels of oil.

Its onshore pipeline transportation business is the company’s largest and most important operating segment. 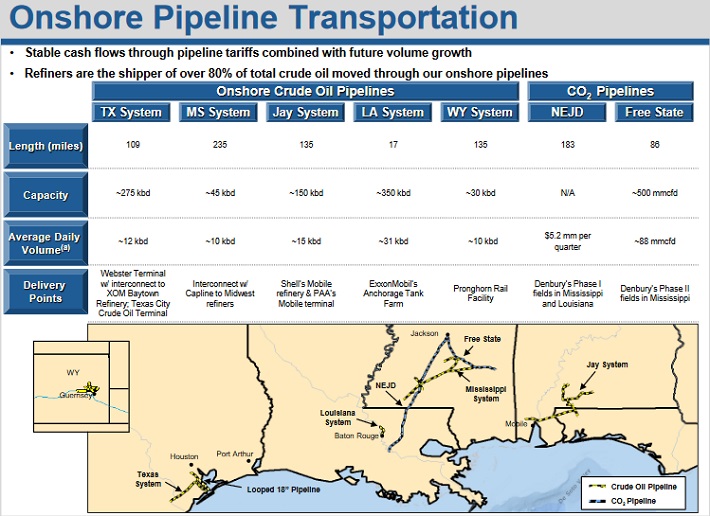 The biggest reason why Genesis has kept on raising distributions, while so many other MLPs slashed their payouts, is because Genesis has very limited commodity price exposure.

For example, its onshore and offshore pipelines, and marine transportation business—which together account for more than three-quarters of the company’s earnings—have no direct commodity price exposure.

Instead, these assets generate stable cash flow through tariffs. Pipelines are operated similarly to toll roads, in that they collect fees based on volumes transported and stored through its system.

Genesis displayed strong growth in 2016. Adjusted EBITDA increased 23% in 2016, to $532.2 million. This growth was fueled by a combination of higher tariffs, and newly-completed projects coming on-line.

The biggest growth catalyst for midstream companies like Genesis is new projects. Fortunately, the company has a number of significant growth projects. 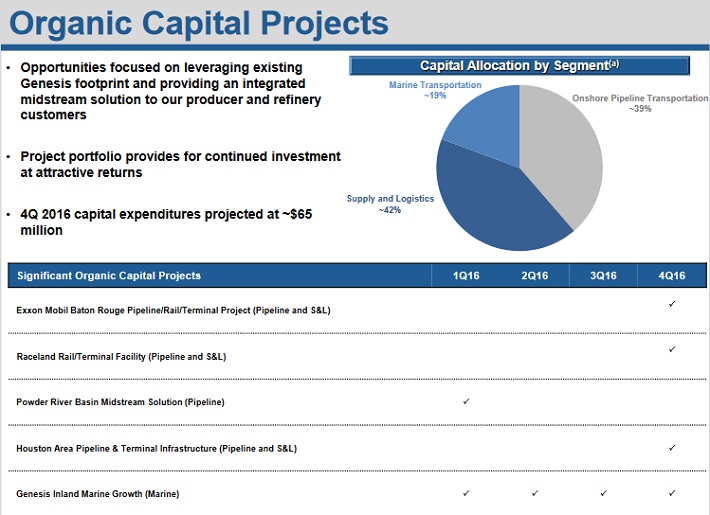 Specifically, the Gulf of Mexico will be a major catalyst.

As opposed to onshore oil fields, which saw a huge decline in active oil rigs over the past two years, the Gulf of Mexico has been far more resilient.

Companies that drill for oil have been reluctant to reduce activity in the Gulf of Mexico. Not only because of the immense new discoveries over the past two years, but also because that region is highly profitable and serves as a good base of future investment. 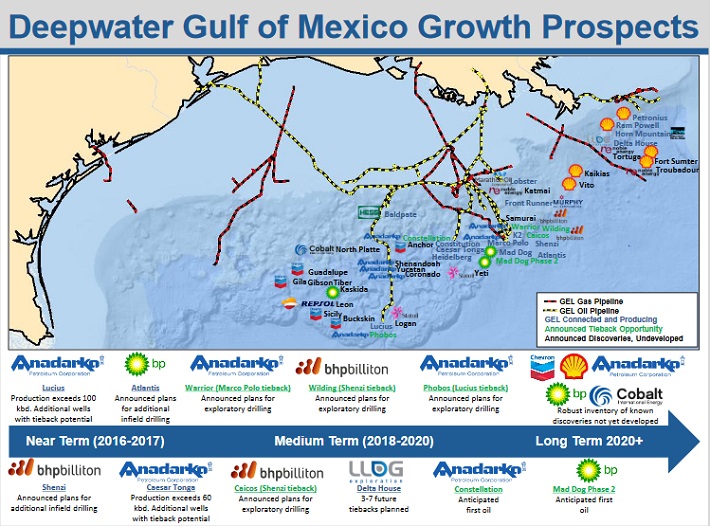 In addition, there are significant resources in the Gulf that have been discovered, but not fully developed.

One example is the Atlantis deep-water platform, which is operated by BP plc (ADR) (NYSE:BP). While oil was first discovered at this location in 1998, BP did not begin first production until 2007. 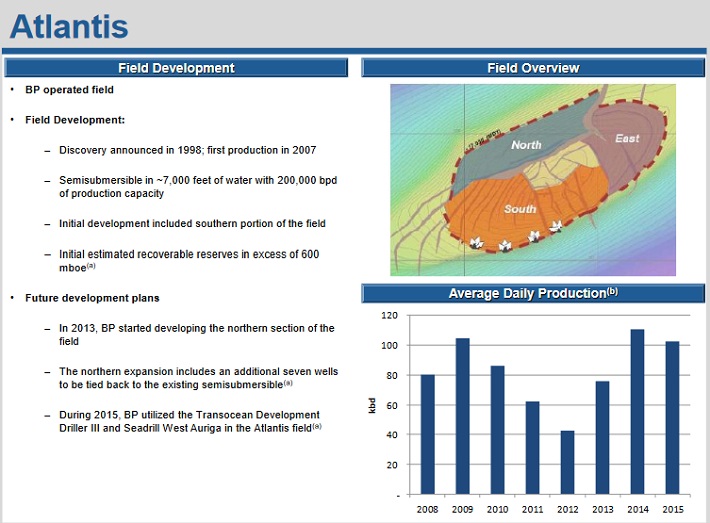 Moreover, the large northern bloc of the development was not developed until 2013.

This is a huge development, with estimated recoverable reserves in excess of 600 million barrels of oil equivalents. 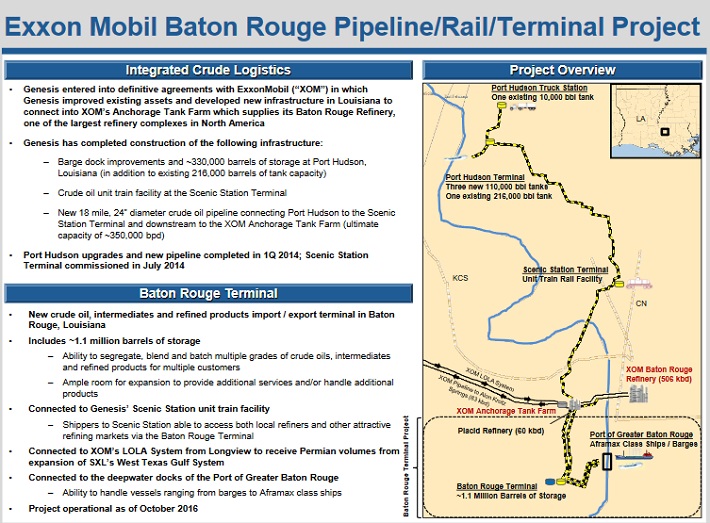 The Baton Rouge development includes 1.1 million barrels of storage, and should be accretive to earnings in 2017 and beyond.

Genesis Energy has consistently raised its dividend for the past several years. It actually delivers dividend increases each quarter.

The company currently pays an annualized distribution of $2.84 per unit.

Importantly, the company covers its distribution with sufficient cash flow. On a per-unit basis, Genesis generated $3.26 in available cash per share in 2016.

Genesis’ available cash before reserves metric is similar to distributable cash flow, in that is a gauge of the cash generated by the business that is available for distribution.

The company maintains a payout ratio of 87%, based on available cash before reserves. If the company continues to generate growth in cash flow above its rate of new equity issuances, it can continue raising its distribution each year.

An added advantage for the company is its ownership structure. Genesis has no general partner incentive distribution rights, which leaves more cash flow available for distribution hikes.

One concern for investors is Genesis’ balance sheet. High levels of debt got MLPs into deep trouble when oil and gas prices collapsed.

The company ended last quarter with a debt-to-EBITDA ratio of 5.22; this is close to average in the MLP space. A ratio above 6.0 is generally seen as a red flag.

As a result, investors should expect the company to be cautious with dividends in 2017.

A reasonable set of expectations would be for the company to pursue one-cent per unit distribution increases each quarter in 2017.

At the current share price, this would result in an 8.1% forward yield for Genesis stock.

After the carnage of 2015 and 2016 in the oil and gas industry, many MLPs cut their dividends. As a result, there are fewer MLPs on the list of Dividend Achievers.

However, there are still several well-run MLPs that qualify, such as Magellan Midstream Partners, L.P. (NYSE:MMP).

Genesis kept on raising its distribution through the crash, thanks to its strong assets, and no incentive distribution rights.

While investors need to closely monitor the company’s debt metrics moving forward, as things stand, Genesis should be able to continue raising its distribution in 2017.