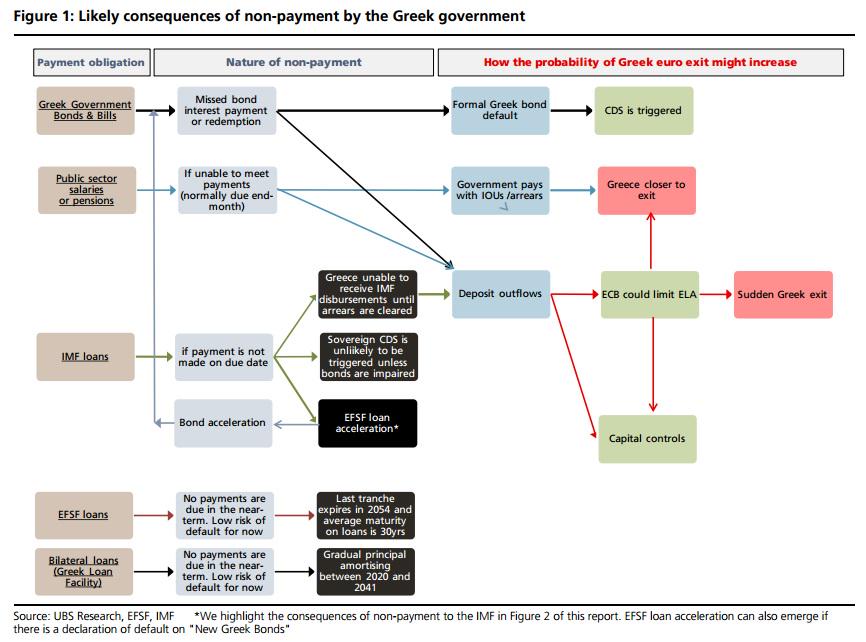 Here’s a nice rundown of the Greek endgame, which is moving towards it’s final stages as the ECB refused to consider a “plan B,” even as a meeting of the block’s 19 finance ministers fell apart over the weekend.

Greece doesn’t just need money to service their Bonds and IMF loans, which are what the US press has been fixating on (because we are one of the parties that is owed that money). Greece also needs moneys to pay their own country’s pension obligations and, of course Government salaries so perhaps you can understand the “FU” attitude the Government is beginning to have towards the ECB as the ministers insist on more and more cutbacks.

Greece has about two weeks to convince the EU to release another $7Bn to them under SOME kind of terms that will enable them to pay $3.7Bn in bonds $800M due to the IMF on the 12th otherwise that default will quickly cascade things out of control.  Over the next month, that $7Bn will be used up on other debt obligations all ahead of a $4Bn payment they already owe to the ECB on July 20th.  Per Goldman Sachs:

We believe negotiations could drag on likely through May and possibly into June. A ‘hard’ deadline could be July 20, when Greece faces a payment of €3.6 bn to the ECB, for which, we think, the country will not have sufficient cash.  Peripheral spread volatility is likely to increase as time goes by, as investors will associate a higher probability of default to a higher probability of Grexit, although this association will depend on what conditions have led to the credit event.

We believe that peripheral markets would sell-off as the July 20 deadline approaches but, as long as the dialogue is still ongoing, spreads between Italy and Spain versus Germany are unlikely to widen more than to around 200-250bp. The tightening trend would resume upon Greece and its creditors finding a solution on the pace of reforms, how to fill the new funding gap and, eventually, also how to reduce the debt stock.

According to Business Insider:  Amid high-level brinkmanship by Greece’s finance minister Yanis Varoufakis, the euro zone officials negotiating the next tranche of bailout funds to cash-strapped Athens are getting frustrated.  Earlier this week, a participant of the April 24 meeting in Riga, Latvia, called Varoufakis a “time-waster, a gambler, and an amateur.” And now eight participants talked to Bloomberg about how the game theorist’s brash style made the talks maddening.

As you can see from his tweet this morning, Greece’s Finance Minister is not budging from his position – nor should he as this whole thing is nothing more than a charade so the ECB can pretend Greece isn’t Bankrupt in order to protect their Banksters who loaned Greece money at USIRIOUS interest rates and are now facing defaults on $400Bn in loans.  Also, of course, the threat of contagious to other faulty zone economies (Italy, Spain, Belgium, Portugal, Cypress, Slovenia and Ireland).  Why should Greece continue to suffer so the ECB can pretend their economic experiment isn’t failing? 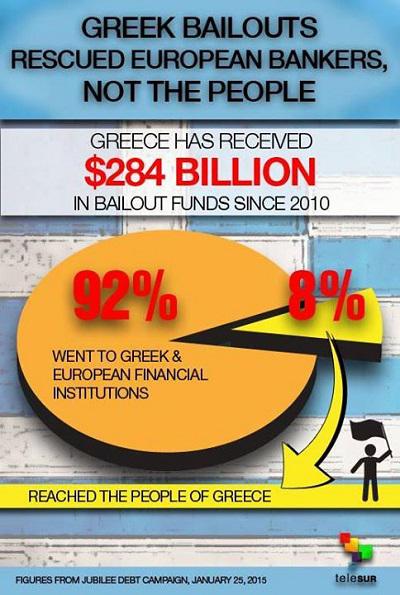 There is only one possible move to be made at Wednesday’s ECB meeting to avoid default: The ECB, through the Emergency Liquidity Assistance operated by its network of national central banks, would continue to extend exceptional funding to Greece. This would be done under the pretense that it is helping Greece deal with a liquidity problem instead of acknowledging the country’s true predicament, deep economic and solvency deficiencies.  In other words – extend and pretend – again.

The Greek people aren’t happy about any of this and, according to the World Happiness Report, the Greek people were the worst off in 2014, with a 1.5-point decline (23%) in life satisfaction, dropping them from 36th place (Spain) to 102nd (between to Lebanon and Swaziland).  The US ranked 15th, just ahead of Brazil but behind Mexico – kind of makes you wonder which side that border is meant to keep out?

As it turns out, if you want to be very happy, you need to live in the Socialist countries of Northern Europe or Canada and Australia and New Zealand are also happier than we are. Maybe that should tell you something – especially since, if it were not for our relatively strong economy – our score would be worse than Greece, as it is for the bottom 80% of our own people in the US.

Meanwhile, up and up our markets go and where they pop – no one knows except, perhaps, Gordon Long, who predicted we’d be right where we are back in 2010, when he wrote “Extend and Pretend:  A Guide to the Road Ahead,” where he wrote: “What will mark the beginning of Stage III is a major shift in political policies. In Europe, early signs were witnessed with the European bailout of Greece and the  $1 Trillion Euro “TARP” like program. Both political decisions decisively diverged from the basis upon which the Maastricht Agreement was constitutionally approved. The level and urgency of the crisis forced this structural shift.”

As you can see, we’re right on track for the next phase of a massive Global monetary failure – but still quite a way’s off so let’s have fun while we can!  Maybe we’ll get lucky and Global Warming will kill us first, right?   That certainly seems to be the GOP’s contingency plan…

As I noted on Friday – it seems to me we’re simply repeating all the same mistakes we made 8 years ago, only with different players so, despite the continued exuberance in the markets, I’m still voting to remain cautious into May, despite the Nasdaq matching it’s dot-com closing high on Friday, allowing all the people who bought in late 1999 to finally say “See – I told you it could go higher!”

Let’s be careful out there.