A 48.9 level for April is the worst in a year and the 4th consecutive month of declines as demand faltered and deflationary pressures persisted.  That is TERRIBLE news – unless, of course, you are an investor in the top 1% – in which case this means China is likely to throw more money at the problem, which will allow you and the companies you invest in to grab their share and keep acting like everything is fine for another quarter.

The latest indication of deepening factory woes raises the risk that second-quarter economic growth may dip below 7 percent for the first time since the depths of the global crisis, adding to official fears of job losses and local-level debt defaults.  “China’s manufacturing sector had a weak start to Q2, with total new business declining at the quickest rate in a year while production stagnated,” said Annabel Fiddes, an economist at Markit.  “The PMI data indicate that more stimulus measures may be required to ensure the economy doesn’t slow from the 7 percent annual growth rate seen in Q1.” 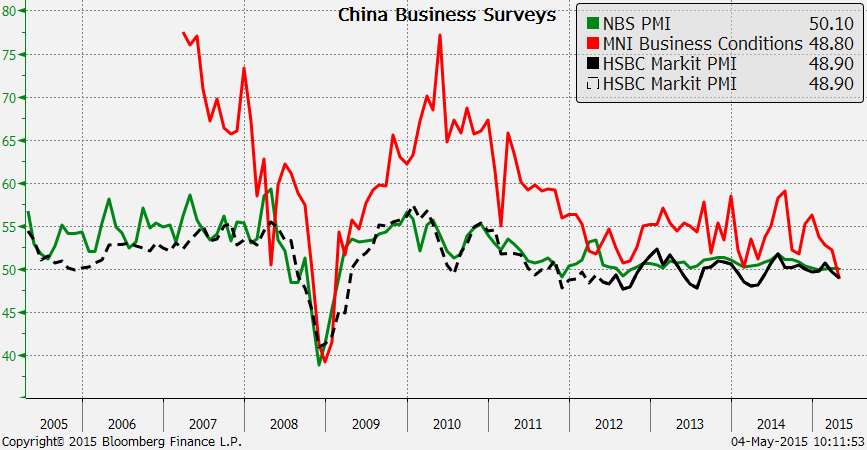 The overall new orders sub-index dipped to 48.7 in April, the sharpest contraction in a year. That suggested a marked deterioration in domestic demand, as new export orders showed tentative signs of improvement.  Both input and output prices declined for a ninth month, while manufacturers shed jobs for an 18th month, auguring poorly for an economy that grew at its weakest rate for six years in the first quarter.  An official survey released on Friday showed China’s factories struggled to grow in April as domestic and export demand remained weak. 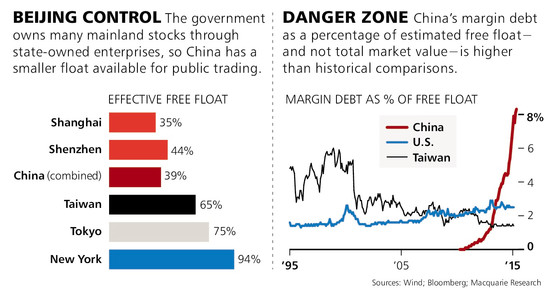 And it’s not just China.  South Korea’s PMI came in at 48.8, also contracting and the New Zealand commodity price index fell 7.4% vs up 4.6% expected by leading Economorons.  French Manufacturing was 48 but Germany was 52.1 and Europe overall was 52.1, so a better story over there.

We’ll get our own Factory Orders data at 10 this morning and I don’t think it’s going to be good because they scheduled Chicago Fed Dove Evans to speak at noon, followed by San Francisco’s Dove Williams at 3pm.  The main focus for the week will be US Employment and Productivity – any sign of wage inflation could push the Fed to act sooner, rather than later. 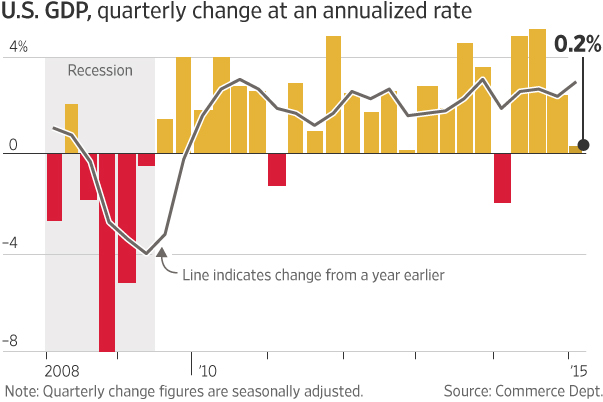 Remember this chart?  Apparently, no one else does because the market collapsed on this dismal GDP report on Thursday but mostly recovered on Friday and now our Futures are positive today so we should be pretty much back to where we started – as if the US GDP report never happened.

So far, MOST of the US companies reporting have MISSED their revenue targets but a combination of layoffs, cost-cutting and buying back their own shares (6 out of 7 market transactions are companies buying back their own stock) have kept earnings beats in the 60% range – so who needs a good economy when you can engineer your profits with FREE MONEY?!?

Berkshire Hathaway Inc. (NYSE:BRK.A) is boosting the S&P this morning because they had a 9.8% rise in profits, from $4.71Bn last year’s Q1 to $5.16Bn this year.  That sounds FANTASTIC until you notice that $857M of that $450M improvement (190%) came from derivatives trading (ie gambling) while the actual operations and investments of the company slipped 10%.

That will be ignored, of course – along with any other bad news by the Corporate Media, who are charged with whipping the public into a buying frenzy so the big money sponsors who pay their bills can cash in the stocks they bought at half the price just a few years ago and then, when we finally have a correction, your local MSM personality will say “Who could have seen this coming?”