Missing Out May Not Be So Bad

EconMatters- May 14, 2015, 7:05 AM EDT
SHARE ON:
The greatest fear in the investment management industry is not what one might expect. It is not losing money but the fear of not making enough money when the market is moving relentlessly higher. This “fear of missing out” strikes terror into the heart of portfolio managers as clients will simply not tolerate it; it is the cardinal sin of the business.
The thinking was explained to me as follows. Lose money when the markets are going down and everyone else is suffering and you’ll be just fine. But fail to capture maximum upside during a raging bull market and you’ll soon be out of a job.
Since 1928, the S&P 500 has generated an annualized total return of 9.3%.
What if I told you that it was possible to exceed this return but in order to do so you had to be willing to accept only 63% of the upside when markets are moving higher? If you’re being honest, you’ll say that capturing only 63% of the market’s gain in up periods is unacceptable. There’s no way you would sit on your hands through those periods without the fear of missing out getting the better of you.
In our recent research paper on Lumber and Gold, this is precisely the upside capture ratio we illustrated in a strategy that outperformed the S&P 500 by roughly 4% per year over multiple market and economic cycles. How in the world was that possible if you only captured 63% of the upside?
Good question. As it turns out, the strategy did so by focusing on something way more important than participating on the upside: protecting on the downside. By limiting the downside capture ratio to only 31% over time, the strategy was able to not only outperform the broad market but do so with lower volatility and lower drawdowns. These secondary attributes (lower volatility and drawdowns) can be more important than returns, as they increase the likelihood than an investor will actually stick with a strategy.
Going back to 1928, if you had consistent upside capture of 63% while limiting downside capture to 31% in U.S. equities, you would have generated an annualized return of 12.9%. Contrast this performance with a more aggressive strategy that outperforms the market during up periods (110% upside capture) but exceeds the market’s losses in down periods (130% downside capture). The difference is telling. The aggressive strategy underperforms the S&P 500 by 3.6% per year (with higher risk) while the defensive strategy outperforms by 3.6% per year (with lower risk). 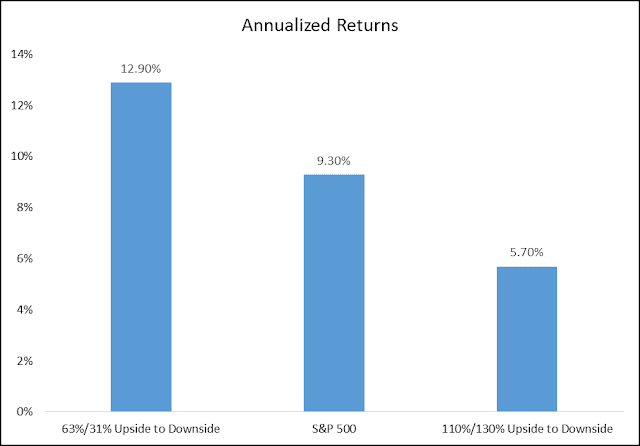 But back to my initial assertion, that few managers would pursue such a defensive strategy in the first place due to the fear of missing out on upside. This is particularly true today, over six years into a bull market and four years without a sizable correction. Would you buy into a strategy that underperformed the S&P 500 by 14% over the past 3 years as this one has? Would your clients let you? 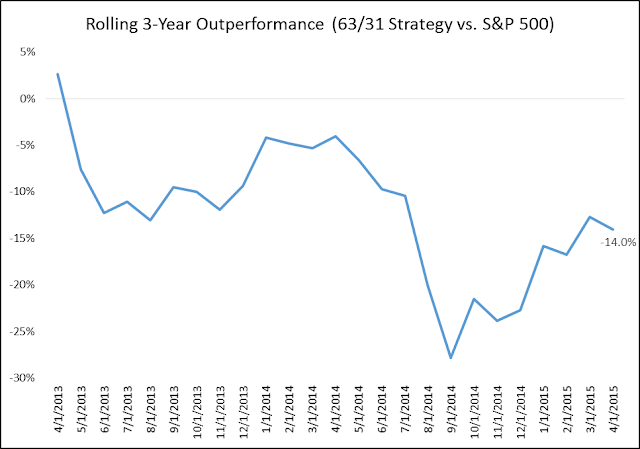 Similar to the mid to late 1990’s the last few years have featured runaway gains in U.S. equities. Any strategy that was built to minimize downside over this time has dramatically underperformed as there has simply been no downside to capture.
While some would view this as flaw in these strategies it is the only way they can work over time. In order to minimize downside you have to be willing to give up upside in return, and by extension this means underperforming during runaway phases in bull markets. There is no other way if your primary goal is to protect capital.
The tide always turns and while out of favor today, preserving capital and managing risk will be back in vogue once more, but only after the declines occur. In the meantime, what will keep most investment managers awake at night is the greater instinctual fear – the fear of missing out – on another 1999-2000 blow off move and not being long enough.
Research Report
analyst ratings
blogger opinions
investor sentiment
news sentiment
analyst ratings
insider activity
hedge funds
stats charts
You May Also Like